“We’re so excited we couldn’t sleep. We’ve been waiting for so long.”

Congratulations are in order for Meghan Trainor and Daryl Sabara!

During a virtual appearance on “TODAY with Hoda and Jenna” on Wednesday, the couple revealed they are expecting their first child together. Trainor, 26, and Sabara, 28, who were both wearing matching Hoda Kotb sweatshirts, announced the exciting news while surrounded by holiday decorations, including a large Christmas tree. 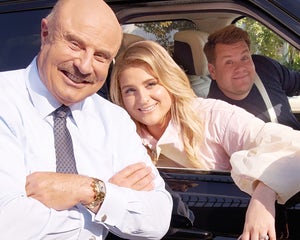 “I’m very good as you can tell — it’s all Christmas here,” Trainor told Kotb and host Jenna Bush Hager. “But there’s other news that I’m dying to tell you and my heart’s pounding out of my chest.”

“Hit it, Daryl,” she added, before Sabara came into the frame and exclaimed, “We’re pregnant!”

“We’re so excited we couldn’t sleep,” Trainor continued. “We’ve been waiting for so long. I was thinking about who do we tell first and I’ve told Hoda since I was 19, going to the ‘TODAY’ show, ‘I will have the most babies in the world.'”

“Every time I see you, I’m like, it’s going to happen — and it finally happened!” she added, “And we’re so excited!”

The “All About That Bass” singer also announced the news on Instagram, posting a photo of a sonogram placed on a Christmas tree.

“You all know how long I’ve wanted this!!!!😭🥰 ” she captioned the pic. “@darylsabara and I are so beyond happy and excited to meet this little cutie early next year! WE’RE PREGNANTTTTT!!! 🎁😍🥳”

Back in February, Sabara reacted to Trainor saying she had plans to be pregnant by the end of the year.

“That would be awesome. I would love that,” the actor said, while arriving at LAX at the time.

As to whether they were “in training” to become pregnant, Sabara laughed and said sheepishly, “Well, I mean, we are married. Also, my father-in-law is right behind me.”

Trainor shared her thoughts on becoming a mother during a guest appearance on NikkieTutorials in January, noting that she wanted to take care of some business before welcoming a bundle of joy into her life.

“[I want] to go on tour next summer, and then I want to make a baby,” she began. “I haven’t told anybody this. I don’t know if it’s gonna happen.”

“I want one!” she continued. “[My mom and I] discussed it all last week. I’m gonna be so pregnant!”

While the Grammy winner had to postpone her summer tour due to the coronavirus pandemic, Trainor announced in September that she was working on a holiday album, titled, “A Very Trainor Christmas,” which is out later this month.

“It’s my favorite things in the world: a baby, my husband, and Christmas!” Trainor told Kotb and Hager on “TODAY” Wednesday.

When Kotb asked if she’s already singing to her unborn child, Trainor revealed she was already pregnant when she recorded the album.

“It’s like our first album together,” the singer said. “It’s really cute.”