The nation's two largest state economies have taken the biggest hit from the coronavirus recession as the collapse in tourism and construction weigh down Victoria and NSW.

The pandemic's impact has been so large, data from the Australian Bureau of Statistics shows economic activity per capita in both states has been dragged back to where it was at least three years ago. 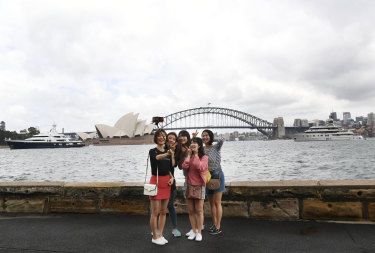 Pandemic-related closures have hit the tourism sector, with the NSW economy shrinking for the first time on record.Credit:Peter Braig

But the same figures show two of the country's smallest economies, the Northern Territory and the ACT, managed to grow through 2019-20 despite the pandemic.

Every year, the ABS calculates annual economic growth for each state and territory.

For the first time on record, the NSW economy contracted, shrinking by 0.7 per cent. In gross state product per capita terms, it went backwards by 1.8 per cent.

The ABS said pandemic-related restrictions, drought and bushfires had taken their toll on NSW, particularly the tourism, accommodation and arts sectors. Last year's drought also hurt NSW, with agriculture's contribution to the economy falling by 9.1 per cent. It was the third consecutive annual fall in the state's farm sector.

Victoria did marginally better, with the nation's second-largest economy contracting by 0.5 per cent through the year. Per capita gross state product fell by 2.3 per cent, the worst decline since the 1990-91 recession.

The ABS said measures to restrict the spread of coronavirus had hurt the state's economy, with activity across accommodation and food services down by 12.5 per cent. This data pre-dates the second wave of restrictions put in place by the Andrews government.

The largest hit taken by any state so far by the crisis has been South Australia, with gross state product shrinking by 1.4 per cent, while in Queensland it fell by 1.1 per cent. It was also Queensland's first economic contraction, with the ABS attributing it in part to a sharp fall in private investment.

But defying the trend, the gross state product of the Northern Territory expanded by a national-best 5.3 per cent. The small economy can suffer large swings in activity due to its heavy reliance on tiny areas of activity. Gross value add from the mining sector jumped by almost 40 per cent as the construction of a major LNG project in the territory shifted to production.

The ACT economy which, despite the territory's small physical size, is larger than the NT or Tasmania's, expanded by 2.4 per cent.

While hit by the summer's fires and closures associated with the coronavirus, spending on health care and across the public sector ensured the ACT is now the only state or territory not to contract since the ABS started collating figures in 1990.

The West Australian economy, like the NT, expanded due to its heavy exposure to the mining sector as iron ore prices soared through the year. Despite this, construction activity contracted for the sixth consecutive year.