Defence has begun sending "show cause" notices to members of the elite special forces regiment that was subject to the Afghanistan war crimes inquiry, paving the way for them to be kicked out of the military.

The soldiers who have received the notices are members of the Special Air Service Regiment's second and third squadrons suspected of being "accessories" or "witnesses" of alleged murders carried out by other SAS soldiers. 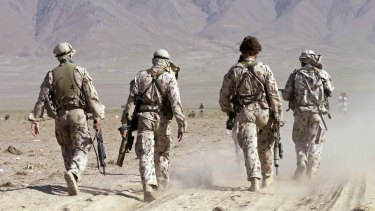 A number of serving SAS soldiers have been sent “show cause” notices, paving the way for them to be kicked out of the military.Credit:Australian Defence Force

A four-year inquiry, led by Justice Paul Brereton for the Inspector-General of the Australian Defence Force, found Australian special forces soldiers allegedly committed 39 murders in Afghanistan, and 19 serving or former soldiers will face possible prosecution and the stripping of their medals.

The ABC reported at least 10 current members of the SAS implicated in the damning report have received show cause notices from the Defence Department.

The Sydney Morning Herald and The Age has confirmed with Defence sources that SAS members began receiving the notices this week, asking them to show cause why they shouldn't be sacked.

Liberal senator Jim Molan, a former major general who served in Iraq, said in an email to Liberal Party members there was "much to be done" in the wake of the Brereton report's findings.

"Let's look after the wellbeing of all of those involved and their families, and I can vouch for the impact on self and family of being accused of such crimes," he said.

"Let's guard the reputation of the military in this country because they deserve our support and we need our military to be strong and effective in these very uncertain times. Let's also support the process to now take its course and have confidence in our legal system.

"The presumption of innocence is critical as is the support of those involved."

The report was scathing of patrol commanders of the Special Operations Task Group, who are senior soldiers that lead small teams of four to five men and who Justice Brereton blamed for the worst alleged war crimes.

General Campbell also said he would write to the Governor-General requesting he revoke the meritorious unit citation for the entire Special Operations Task Group between 2007 and 2013.

He said decisions on cancelling individual medals would be made on a case-by-case basis.

The Special Air Service Regiment's second squadron – which was subject to the majority of allegations – is also being disbanded.