There was both rain and sunshine; buildings and roads appeared brighter than the darkened clouds. In a strange stillness, I was the only figure walking through an awkward meeting point of freeways and overpasses in South Melbourne. It felt entirely real, and unreally cinematic. I thought of two images: the first was a girl in a pink dress, calling out in the wind, framed by an aqua barrier and roadwork signage. The second is iconic: a man stands near the yellow-brown entrance of the Cahill Expressway in Sydney. Both scenes have trademark grey skies and sunlight. They are also Jeffrey Smart paintings. 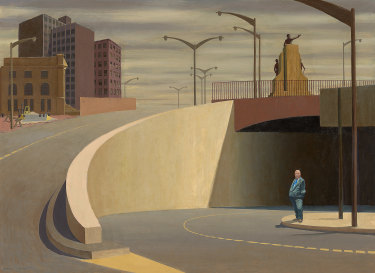 I have never quite understood Smart. His famous gaze — his capturing of what are called "stark" and "alienating" urban and industrial landscapes — didn't feel convincing. Yet this was the year I began walking, which meant being in landscapes. Daily exercise is now a necessity, but I had been walking since January after the swift end of an eight-year relationship. I trudged from Brunswick to Collingwood, Footscray to South Wharf. By the time the first lockdown struck, I was already well-acquainted with solitude.

Did Smart know about heartbreak or walking? He certainly knew about the former. In his reasonably witty autobiography Not Quite Straight, he writes with equal flippancy, knowing self-pity and small tragedy: "Anyone who survives a terrible separation should be awarded a lovely prize — a medallion and a blue ribbon. Don't we all deserve something?"

As for walking, it comes up only once during a period of isolation in Italy. "A painter's life is a lonely one: you spend all day in silence," he writes, before describing his daily "long walks in the woods".

A studio in the Italian countryside, where he moved in 1963, was where many of Smart's most iconic images emerged. Although he was a skilled draftsman who painted according to certain rules of geometry — and the only aesthetic moral he seemed to follow was his own version of precision — he was fond of the unappreciated; factories, cars, average-looking buildings. In his youth he favoured the city "slums" above the suburban delights enjoyed by his parents. Yet as much as he captured scenes, he also created them. "According to me a picture has to have structure… It has to be designed," he once told an ABC interviewer. 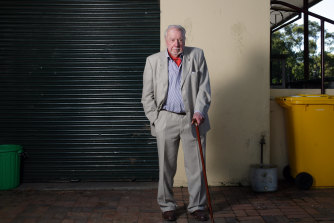 Jeffrey Smart in April 2008. ‘Many of my paintings have their origin in a passing glance,’ he wrote in his autobiography. Credit:Quentin Jones

The idea that a certain moment looks like a Smart painting is not new. Yet walking through that collection of streets in South Melbourne wasn't just visually reminiscent of Smart; it was more the feeling. For all the supposedly dazzling precision of his images, what seizes me is the surrealism; the moment between the psychological and the literal.

Smart spoke of this suspension when he encountered Giorgio Lucchesi's Still Life, 1916. He admired the painting style as being "certainly surrealistic and wasn't it Oscar Wilde who said that to be deceived by art was a pleasure?" Yet he also wondered, "How was it possible to paint anything so realistically?" It was constructed realism with something slightly unnerving in its vision.

With this in mind, walking felt highly charged; I'd catalogue an ugly park in Brunswick, memorise a construction site in Fitzroy. Smart himself disdained "charming" landscape painting. He speaks of "the pleasure of ruins" and of falling in love with T.S. Eliot, quoting lines such as "Newspapers from vacant lots" and "A broke spring in a factory yard". These, the painter writes, were "images I could accept immediately". After reading Eliot he concluded: "I had painted my last flower piece."

A "flower piece" or typically beautiful landscape has something timeless about it, whereas ruins or a city landscape inject a sense of the human-made — which is to say a sense of time. Smart was obsessed with stillness, but only because time passes.

How did such images get lodged in Smart's imagination? Refusing to indulge in self-analysis or to explain his private jokes and allusions, he opened a small window in the epilogue of his autobiography. "Many of my paintings have their origin in a passing glance," he wrote. "Enchantment is the word for it." Enchantment. It's also the word he used, 400 pages earlier, to describe the "inner-city slum houses" that captivated him as a child.

When you have the streets to yourself, enchantment could describe those quiet moments of walking and looking: sometimes a scene simply compels for all kinds of non-simple reasons. I didn't seek to adopt Smart's vision, but the power of his paintings convinced me, at least unconsciously, to borrow his gaze. It's a reminder of how a person sees through art; that sometimes the painting comes before the world.

For all the solipsism of looking, there is something common in this. I think of art critic John Berger: "Landmarks don't fully explain themselves, but they offer a reference point that can be shared… Without landmarks there is the great human risk of turning in circles."