The set began with Mendes at the piano, performing his hit song "In My Blood." After a few minutes performing solo, Mendes put his guitar around his shoulder, walked through the audience, and joined Cyrus on stage as the two began to sing the song as a duet. Briefly, Cyrus sang by herself while Mendes played the guitar, but eventually the two joined forces again for a truly moving and powerful performance.

Not only did their voices match up gorgeously, but so did their outfits. Cyrus sported black pants and a chic sleeveless top that was open down the middle, revealing her blingy necklaces and and joined by a gold chain. Mendes wore a shiny, sleeveless black top and navy pants.

If you missed it, check out this short clip of their gorgeous performance. It’ll definitely make you want to watch the whole thing over and over again.

As expected, Twitter reacted strongly to the duo’s song. Twitter user @pancakeashley27 wrote, "The collaboration we never knew we needed, thank you Shawn Mendes and Miley Cyrus," which is pretty much what everyone felt. Another Twitter user, AngelaPe98, echoed the positive sentiment and shared, "OK but [I] can’t get over @MileyCyrus and @ShawnMendes. That…performance deserves a Grammy."

Mendes is nominated for two Grammys this year — Song of the Year for "In My Blood," and Best Pop Vocal Album for his self-titled album. Though Cyrus isn’t nominated for an award, she’s playing a pivotal role during this year’s show. Not only did she perform with Mendes, but she also joined performers like Kacey Musgraves, Maren Morris, and Katy Perry to pay tribute to her godmother Dolly Parton and her entire country music career.

This is the second time Medes and Cyrus have performed together this week alone. On Friday night, the duo sang "Islands in the Stream" with Mark Ronson to pay tribute to Dolly Parton at the MusiCares gala, which honored the country singer. Cyrus told Variety that the two connected and set up the performance via DM. Who knew social media would be to thank for such an epic performance? 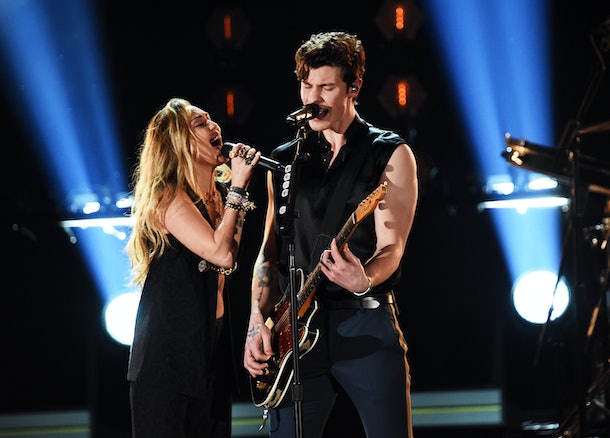 Cyrus and Medes join an impressive lineup of performers at the Grammys on Sunday night. The show started off with a dynamite performance by Dua Lipa, a gorgeous song by country singer Kacey Musgraves, a rockin’ performance by Janelle Monae, and Anthony Kiedis joining forces with Post Malone. Other performers include Cardi B, H.E.R, Brandi Carlile, and Diana Ross and some of the 2019 presenters include Jada Pinkett Smith, John Mayer, Meghan Trainor, and Nina Dobrev. While some stars didn’t make their way to this year’s show, there’s still plenty of star power in LA for the show.

Many fans of Cyrus and Mendes’ performance are hoping that the two will collab again in the future because of how powerful their performance was together. Here’s hoping this duo will form a partnership beyond the Grammys!