A woman who has been asked on numerous occasions to help her boyfriend with errands around his house, has been advised to end the relationship because of his ‘controlling’ behaviour.

Posting anonymously on UK forum Mumsnet, the woman explained her boyfriend has been delegating tasks to her when he’s working on jobs around his house without saying please.

She said her boyfriend doesn’t try to control her behaviour or how she dresses, but that he often dictates arrangements when they have plans instead of having a discussion, and his actions don’t make her feel like an equal in their relationship.

She added that after making lunch at his request, he pointed out crumbs she’d left on the counter, and also told her she’d not put the bin liner in properly.

‘I told him if he wants things done to his specific standard he needs to do it himself,’ she explained. ‘And he said, “No you just need to learn these things and use your initiative then I wouldn’t have to tell you”.’

While some commenters claimed he was perhaps unintentionally bossy and just needs to be told, the majority argued that he’s controlling and that she should get out of the relationship. 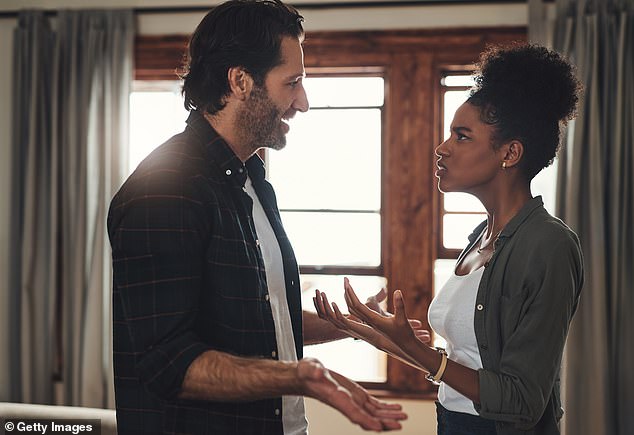 A British woman sparked a discussion about the signs of a controlling person, as she listed the errands her boyfriend has asked her to help him with (file image)

In a lengthy post explaining the situation, the woman wrote: ‘We don’t live together but yesterday I was at his place and he was doing some jobs in the garden and while he was working would delegate tasks to me, i.e. “Can you get a cloth and try and clean that stain on the sofa?”.

“Whilst you’re in the kitchen can you take the bin out?”. “As I’m busy here can you go to the shop and buy us some lunch?”. “Can you go upstairs and get me a screw driver from the toolbox?”.

‘Sometimes accompanied with a “please” but not always. It’s not like he’s sitting on the couch doing nothing and ordering me about from there, but it still doesn’t sit great with me as I feel like I’m running errands for him.’

Revealing she’s tried to confront the situation, she continued: ‘When I brought it up with him he said “Well I’m busy, which is why I ask you to do it”.

‘There are other things that irk me, such as if we are going somewhere for the day he will say “We are leaving at 10, so make sure you are ready by then”, rather than making it a discussion. 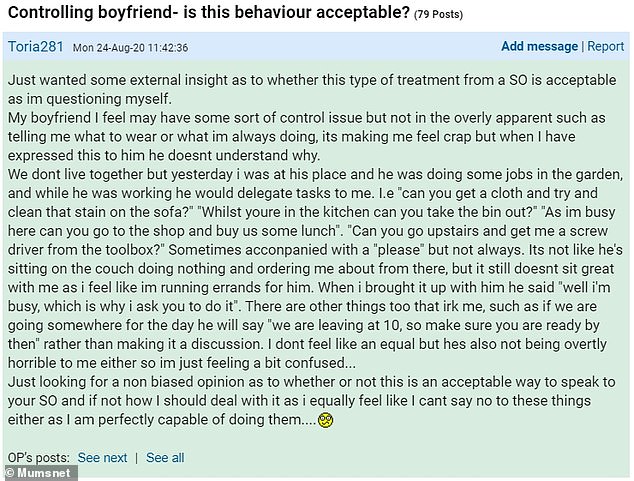 The woman told Mumsnet users that her boyfriend has asked her to empty the bin, clean the sofa and pass him items around his home

A stream of responses agreed that the boyfriend’s behaviour is troubling and urged the woman to end the relationship.

One person wrote: ‘That’s not how relationships work. He seems to see relationships as transactional. I buy dinner, therefore you have to put out my bins and worse, want to take out my bins, to show how grateful you are.

‘Relationships are made up of two individuals who choose what they will or won’t do. If he wants to buy dinner for you both, that’s great. That doesn’t mean you owe him and need to run around like his tweenie.

‘He sounds like the kind of person who expects sex because he paid for dinner. He shouldn’t expect and nor is he entitled to anything. He doesn’t tell you what time to be ready or how to be ready in time. I can feel my blood pressure soaring at the thought. You need to dump him.’

‘I suppose it’s ok if you’re both in the garden doing a job. e.g. could you pass me so and so. No way would I clean his sofa or empty his bins. Then to have the audacity to complain how I’ve done it. B***** cheek! Get rid I think,’ another said.

Others argued the boyfriend’s behaviour is being mistakenly viewed as controlling when he’s probably unintentionally being bossy.

‘What a patronizing prat. I don’t think it’s controlling, but it isn’t nice and it’s certainly not sexy.

‘I would look for someone else. Someone who is grateful that you take the bins out and wants to spend time with you because they like you, not because they want to train you to do everything exactly they would,’ one wrote.

Another said: ‘My DH manages perfectly well to do jobs without me when I’m out but as soon as I appear it’s hold this, pass that. I tell him to give me warning when he needs help so I can fit it around what I’m doing.

‘I don’t think it’s controlling as such just bossy. Next time your SO tells you to be ready at a certain time say that’s doesn’t work for you and try changing the time, see how he handles it.’

A third added: ‘If he asked you to do those things in nice way you would not feel he was controlling? I can be very direct and people find me bossy, although I have no intention of being controlling.

‘I just find sugar coating extremely tiring and manipulative. On the other hand, if my BF did not tell me what time we had to go somewhere we’d always be late. Yes, he takes control sometimes and I let him because I cannot pretend I am something I am not. In time I have learnt to appreciate this and started to keep my time better.’

Others said the boyfriend is being bossy rather than controlling, revealing their own husbands have a habit of asking for help with errands