Woolworths warehouse workers have been offered a pay rise of more than 10 per cent over three years amid soaring unemployment and sluggish wage growth after a two week standoff that tested grocery supply chains.

The 550 warehouse workers at a key Woolworths distribution centre near Wyong on the New South Wales central coast voted to come back to work on Thursday after almost two weeks of strikes and lockouts. 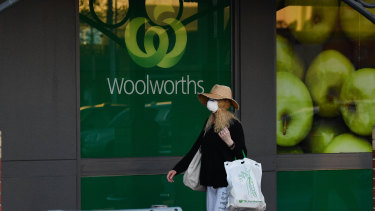 Woolworths is facing a stretched supply chain in Victoria as a result of coronavirus restrictions.Credit:Joe Armao

The workers had been seeking a pay rise of up to 16 per cent over three years to take them up to parity with some of their colleagues in the company's Sydney warehouses.

Staff went on strike for 24 hours on July 24, which was met by the company locking them out, followed by a further strike.

The Wyong warehouse is one of three in NSW and provides fresh produce and packaged groceries to about 75 Woolworths stores from the north of Sydney through the central coast. When the workers left the company had to turn to supply centres as far away as the Victorian border.

No deal has been formalised but the company's offer totals a 10.8 percentage point wage rise over the life of the agreement, with a pathway for some staff to convert to higher paying roles and for labour hire workers to get permanent jobs. The company had originally proposed a 9 percentage point rise.

Almost 1 million Australians are out of work as a result of the coronavirus pandemic, which also prompted the national industrial tribunal to award a low 1.75 per cent increase to minimum wages with a delayed increase for many hard-hit sectors.

The pay offer comes in the same week the Victorian government announced it would force distribution centres to reduce their workforce by 33 per cent to reduce the risk of COVID-19, sparking fears from the industry it could lead to food shortages.

The deal will also commit Woolworths to try to keep labour hire workers' hours to 20 per cent of the total except at peak periods like Easter. Unions argue labour hire workers, who are often casuals, lack job security while companies see them as a useful way of scaling up and down their workforce in response to demand.

The United Workers Union's logistics director Matt Toner, whose union represents the workers, said workers had "voted to return to work after making significant improvements to wages and secure jobs".

"We're proud of our members for taking the fight to one of the biggest companies in the country," Mr Toner said.

Woolworths chief supply chain office Paul Graham said the company was happy to have its staff back and called its offer a "reasonable compromise" after tough negotiations. The company has not given ground on the union's call for reduced pick rates, which are the targets of the number of goods that workers have to collect and pack.

The supermarket giant has performed far better than many other retailers during the pandemic.