Teacher, 48, claims she’s been forced to quit her job due to Long Covid lasting eight MONTHS that leaves her feeling like she’s ‘dying’ and needs a cocktail of drugs and steroid inhalers to help her breathe

A teacher who has been battling Long Covid for eight months and was forced to quit her job as she was unable to work has admitted she’s surprised she’s managing to ‘hold it together’.

Just talking is a struggle for 48-year-old Margaret McAtamney, from Belfast, who contracted coronavirus in March and is still plagued by a debilitating cough and shortness of breath.

Despite being fit and healthy with no underlying conditions, she is among thousands of unlucky Britons whose battle with Covid-19 has far outstretched the usual two-week bout of sickness. Around one per cent of Covid patients are still ill six months after becoming infected.

Now Maggie, who lives alone, has the additional worry of living with zero income and is currently surviving on limited savings. 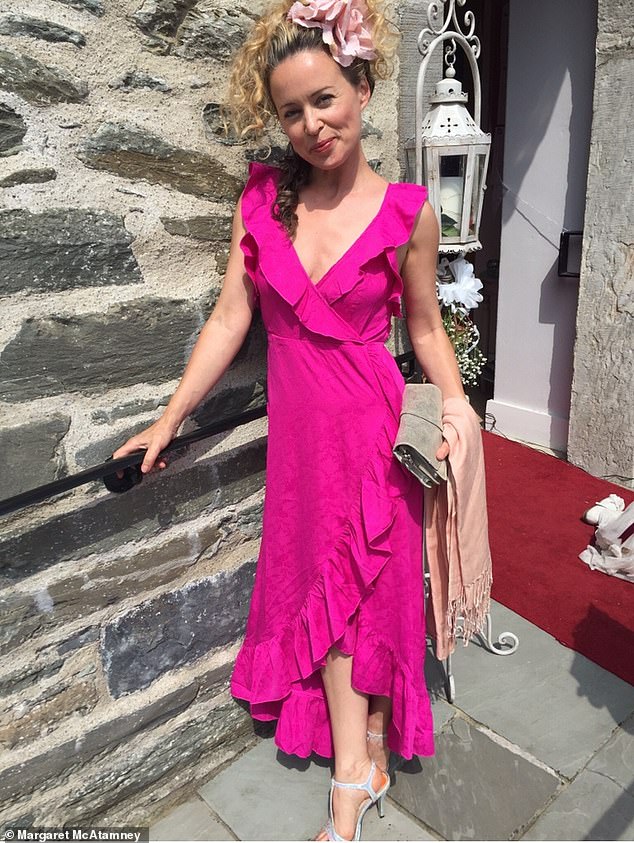 Just talking is a struggle for 48-year-old Margaret McAtamney, from Belfast, pictured before her illness, who contracted coronavirus in March and is still plagued by a debilitating cough and shortness of breath 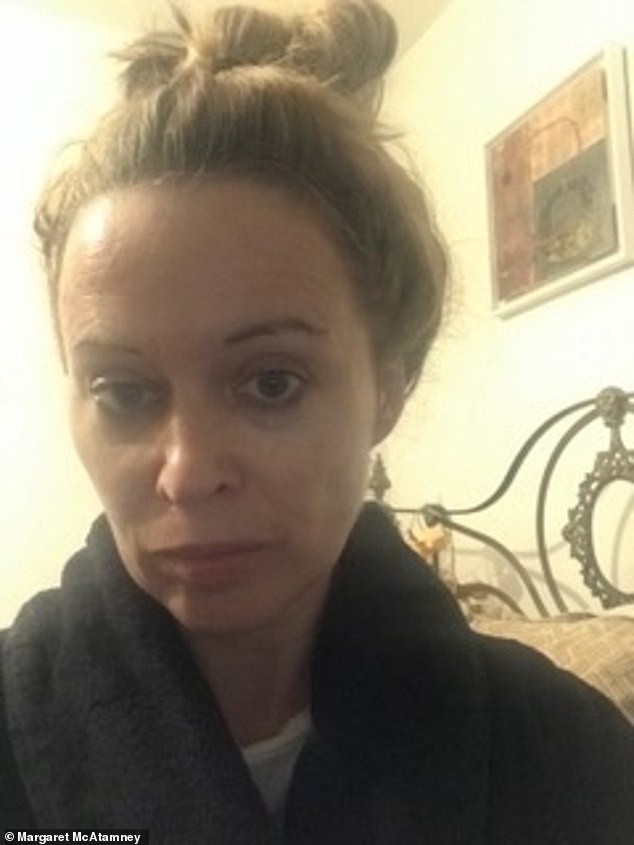 Despite being fit and healthy with no underlying conditions, Maggie is among thousands of unlucky Britons whose battle with Covid-19 has far outstretched the usual two-week bout of sickness. Pictured recently

‘You have moments of real despair,’ she told FEMAIL. ‘I’m going into eight months now and it’s the same, it’s a constant, chronic, every day thing.

‘I’m surprised I’ve managed to hold it together like I have because you could easily go under. I think a lot of people would turn to drink and drugs and goodness knows what to get through, but that’s the worst thing you could do.

‘I can’t work, I had to leave a really well paid job – I couldn’t teach the kids, my throat was swollen and I couldn’t even walk around the room. I have a small amount of savings, but that’s not going to last forever.

‘I think it’s important everyone understands what this virus does. I think it’s been played down.’ 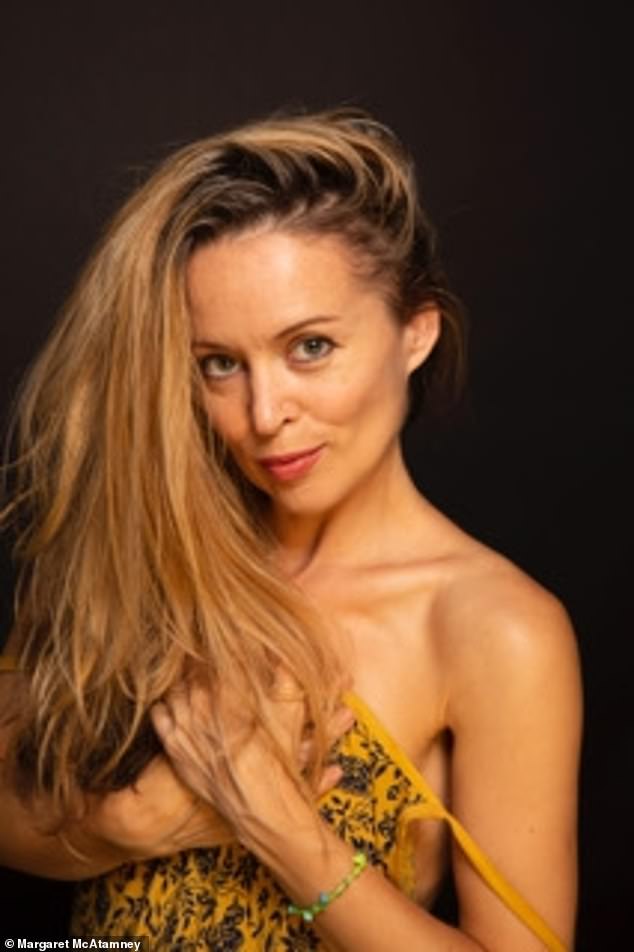 Maggie, pictured pre-Covid, was forced to quit her job as a secondary school art teacher as she was unable to work and has admitted she’s surprised she’s managing to ‘hold it together’

Scientists remain baffled by the lasting effects of Covid – likened to this generation’s polio – with research suggesting one in 10 under-50s who catch it will be plagued by lasting side effects including heart palpitations, muscle weakness and ‘brain fog’.

Last month it was reported the NHS will officially recognise Long Covid and draw up guidelines for doctors on how to treat the debilitating condition.

But Maggie told FEMAIL she and fellow sufferers – many of whom are members of the Long Haul Covid Fighters UK Facebook group – feel ‘forgotten’.

‘We don’t get a voice, people don’t believe you – I don’t think I would have believed it,’ she said. ‘But it’s bad, it’s very debilitating and I think the mental health aspect is just as bad. 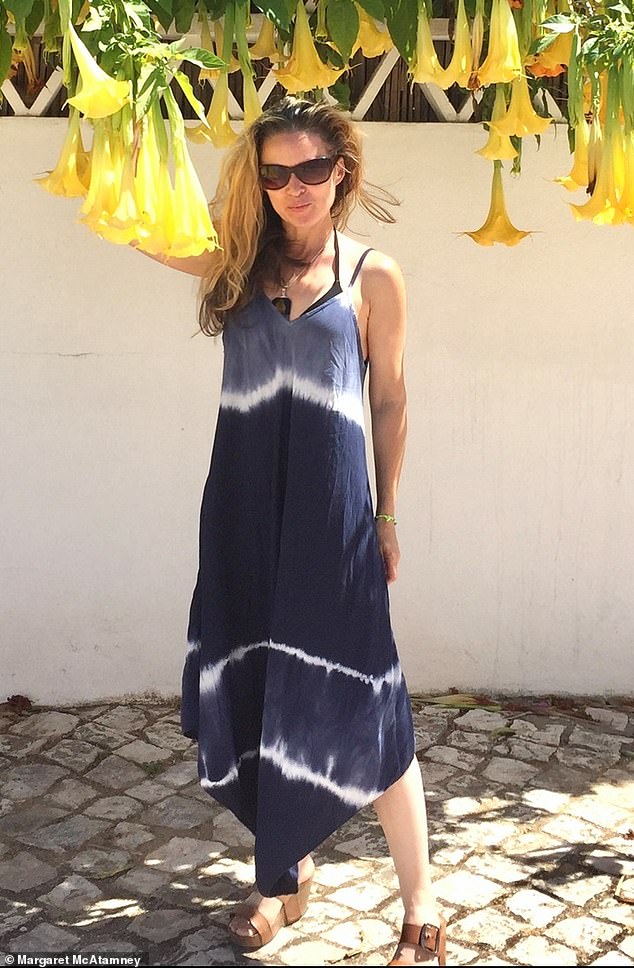 Prior to catching Covid-19, Maggie said she was a very productive, sociable and ‘outdoors’ person who went running and practiced yoga regularly

‘I don’t think there’s any support. In Northern Ireland, the only help we have is from our GP, and they’ve said there’s nothing else they can do, we are just sent home and told to manage our symptoms. I think it’s appalling.

WHAT ARE THE LONG-TERM SYMPTOMS OF COVID-19?

Most coronavirus patients will recover within a fortnight, suffering a fever, cough and losing their sense of smell or taste for several days.

However, evidence is beginning to show that the tell-tale symptoms of the virus can persist for weeks on end in ‘long haulers’ — the term for patients plagued by lasting complications.

Data from the COVID Symptom Study app, by King’s College London and health company Zoe, suggests one in ten people may still have symptoms after three weeks, and some may suffer for months.

For those with more severe disease, Italian researchers who tracked 143 people who had been hospitalised with the disease found almost 90 per cent still had symptoms including fatigue two months after first falling unwell.

The most common complaints were fatigue, a shortness of breath and joint pain – all of which were reported during their battle with the illness.

Another study in Italy showed one in ten people who lose their sense of taste and smell with the coronavirus – now recognised as a key sign of the infection – may not get it back within a month.

The study, published in the journal JAMA Otolaryngology – Head and Neck Surgery, involved 187 Italians who had the virus but who were not ill enough to be admitted to hospital.

The UK’s Chief Medical Officer Professor Chris Whitty has said the longer term impacts of Covid-19 on health ‘may be significant’.

Support groups such as Long Covid have popped up online for those who ‘have suspected Covid-19 and your experience doesn’t follow the textbook symptoms or recovery time’.

‘I was told the waiting list to see a respiratory consultant is three years… I try not to think about that too much, it’s just too depressing.

‘I don’t understand why there’s so much made about lockdown and people not getting Covid – what about the people who already have it and are really ill? We need some support around the country because there’s thousands of people like me.’

Prior to catching Covid-19, Maggie said she was a very productive, sociable and ‘outdoors’ person who went running and practiced yoga regularly.

Her overwhelming memory of her initial symptoms is a burning sensation in her chest, ‘as if someone was sitting on it’. A colleague urged her to go home but she struggled to drive and pulled into a garage before calling NHS 111.

‘They told me to go home and self-isolate and call an ambulance if I got worse, which I did. I couldn’t breathe at all and a couple of days later I called 999,’ Maggie recalled.

‘I was one of the first people who went into the Mater Infirmorum Hospital in Belfast, which they turned into a Covid hospital. It was really frightening.’

Despite feeling like she was ‘going to die’, she was sent home. Over a period of several months, Maggie felt she went round in circles of calling her GP, being told to dial 111, phoning an ambulance and then being sent home from hospital to self-medicate.

‘You were just abandoned,’ she recalled. ‘I was at home in isolation but my sisters would call every few hours and people were dropping me off food. I don’t know what I’d do without friends and family.’

She now manages her condition with a cocktail of drugs and steroid inhalers, having never had asthma in her life – but the chest pain ‘never leaves’.

‘It’s there from early in the morning to night, it gets a bit bearable throughout the day but other times it’s really hard. I couldn’t cope without my inhalers,’ she admitted.

As well as being a secondary school art teacher, Maggie is a designer and was set to launch her own crafts business, called MOTHU, in March – but took the devastating decision to sideline her plans when she fell poorly.

Once at hospital Maggie assumed she’d be tested for Covid, however she claims she was told tests were reserved for people who needed to go on a ventilator.

‘It was my dream and I’d been working on it for two years, but I was so ill for the first two to three months, it was horrendous, so I’ve shelved that for now,’ she explained.

‘To set up a business you have to be in a good place, physically and mentally. Now I get about two or three hours a day when I can work, but the rest I have to lie down.’

Maggie said she and other Long Covid sufferers she’s in touch with have received help and support from the British Lung Foundation.

‘I think in the beginning we needed to be validated; we felt we were being fobbed off, and they got it,’ she said. 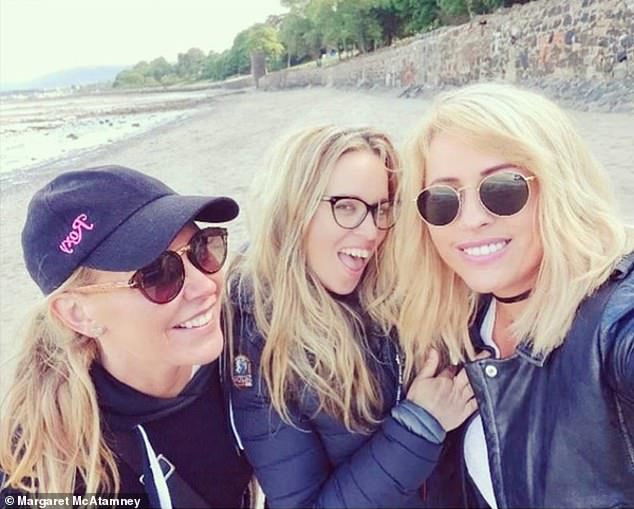 Maggie admitted she felt ‘abandoned’ by the health service during her Covid battle, and said she’s had to rely on friends and family (pictured) 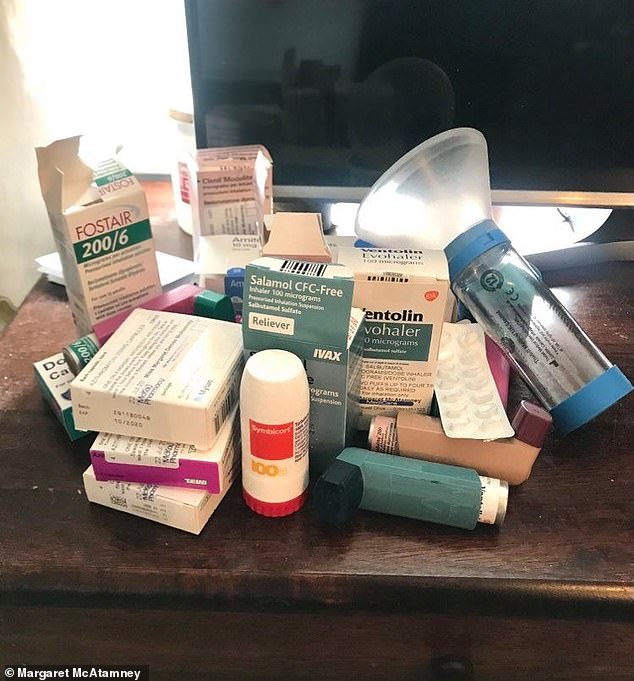 Maggie now manages her cough with a concoction of drugs and steroid inhalers (pictured), having never had asthma in her life, and said the chest pain ‘never leaves’

‘I was on tears on the phone and it was great to have someone who listened and understood. They said you’re not alone and something needs to be done.

‘For me now, my biggest worry is what the future holds.’

Last month Health Secretary Matt Hancock said he is becoming ‘acutely aware’ of the lasting and debilitating impact of Long Covid on people of all ages, regardless of the severity of their initial symptoms. 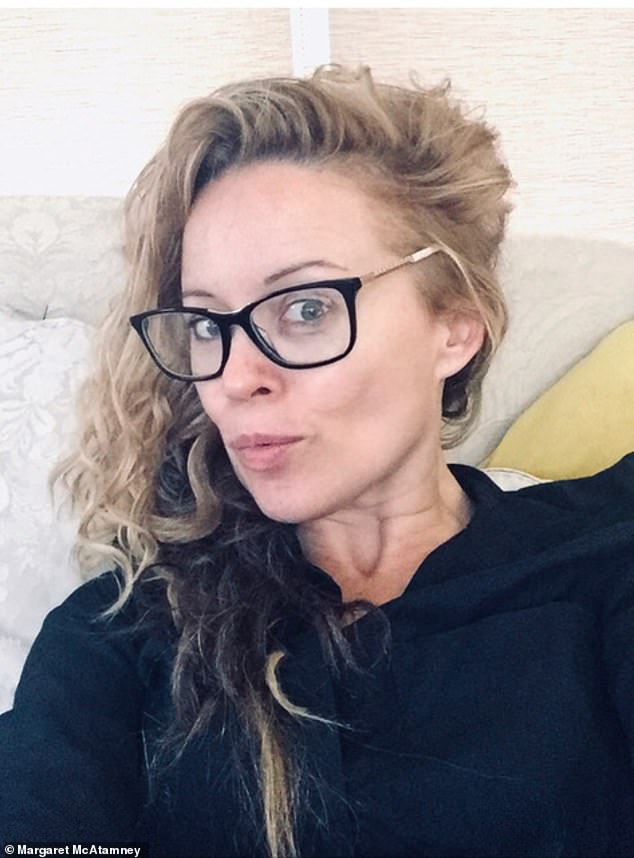 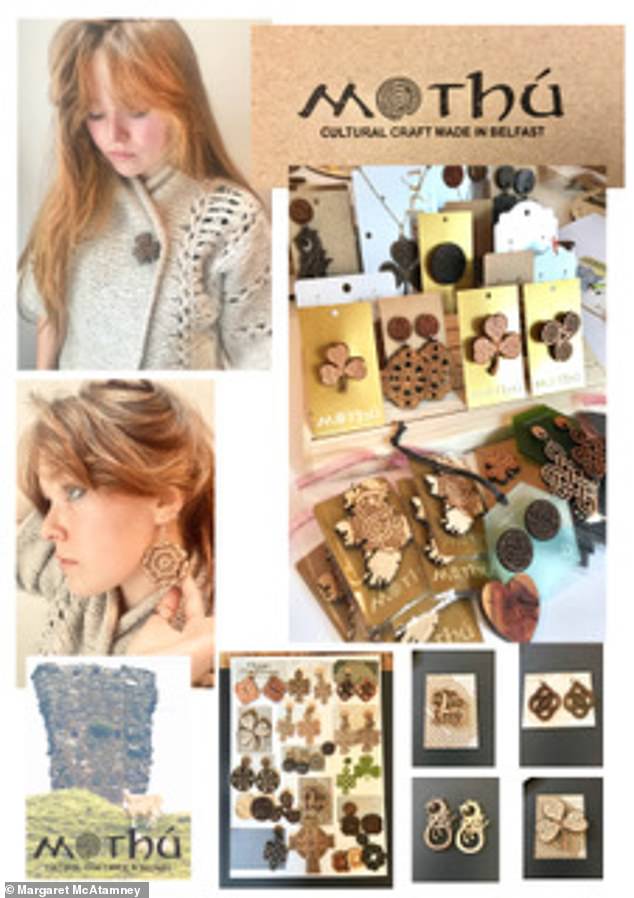 As well as a teacher, Maggie is a designer and was set to launch her own crafts business in March – but everything is now on hold

A Kings College London report found women are 50 per cent more likely to suffer persistent problems after beating the disease, which experts say may persist for more than 12 weeks after the body has fought off the infection.

Scientists uncovered the figures after examining data from 4,000 volunteers who have tested positive for the illness and use the Covid-19 Symptom Study App.

As many as 60,000 people in the UK are thought to be plagued by lingering symptoms such as fatigue, shortness of breath, muscle pain and heart arrhythmias – irregular heart beats – months after beating the disease.

Doctors have cautioned some mental health problems such as anxiety and depression in ‘long-haulers’, as they are known, could be down to lockdowns, as opposed to the virus itself.