When the Stan limited series The Commons, which is set in a near future Sydney straining under harsh demands, was commissioned, it quite possibly appeared to be an act of prediction. By the time it had finished shooting, complete with storylines framed by weather emergencies and climate refugees, it could have had the air of prescience. Now that it’s airing, and Australia is suffering from unprecedented bushfires exacerbated by climate change, it may well be redundant. Reality is now moving faster than any production schedule.

Created by Shelley Birse (The Code), the eight-part drama is set 10 to 20 year ahead of today, when the settings that govern our lives, both public and personal, are being steadily turned to extremes. It provides, in snatches that are sometimes vividly effective and sometimes problematically vague, a sense of tomorrow that feels like a sequel to today: the coastline is evacuated for a “class six” storm, rural dwellers forced off the land are stopped from relocating to the city, and new diseases driven by changing weather patterns spread. 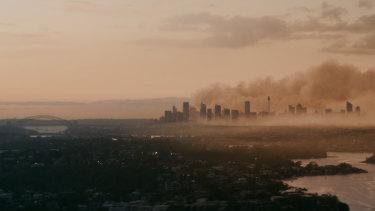 A “Class Six” storm hits Australia in the first episode of The Commons.Credit:Stan

It’s impossible this last week or two, and perhaps any time in the months to come, to watch The Commons and not compare it with our new bushfire reality. Both the show and the television news coverage (which on the whole has been first-rate) feature skies turned otherworldly colours, lost homes, and the mass evacuation of Australians to resettlement centres. That the momentum of real life change has moved beyond the show is undeniable, but that doesn’t mean the series doesn’t provide reflection on what we’re dealing with.

Broadly speaking, the show is about the personal fault-lines between creation and destruction. English expatriate Eadie Boulay (Downton Abbey’s Joanne Froggatt) is a neuropsychologist whose desperation to fall pregnant is straining her marriage to research scientist Lloyd Green (David Lyons). After missing her last chance at IVF, Eadie surreptitiously undertakes an unofficial program, risking her life by suppressing her immune system to make her body accept an embryo. Even as she’s trying to conceive a life, Eadie witnesses the loss of others. 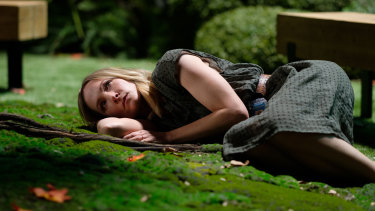 British actress Joanne Froggatt as Eadie in The Commons.Credit:John Platt/Stan

The concerns of The Commons, with their threat of dystopian collapse, are not science fiction, they’re occurring today. It’s now that people worry about whether it’s right to have children given climate change’s growing impact, it’s now that teenagers such as Lloyd’s daughter from his first marriage, Ivy (Inez Curro), struggle with hopelessness (“must have been cool growing up not knowing the world had a use-by date”, the 13-year-old notes), and there is scorn for those who served as climate change denialists.

With such a startling and ambitious remit, it’s understandable that the show is sometimes awkward and tends to the fragmented; themes come and go in individual episodes, instead of intertwining through the narrative. The nightmarish checkpoints keeping rural refugees out of Sydney are contrasted with the cheery country relief centre Eadie visits at one point with a patient, where the triumph-over-adversity spirit is ladled on. By focusing on science over politics there is a hopeful thread running through The Commons, which may be difficult to relate to now but which could attain resonance. 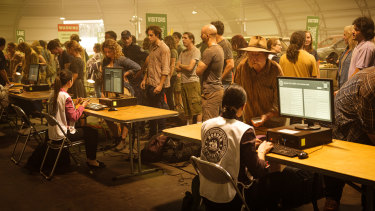 Climate refugees are processed at a checkpoint in a scene in The CommonsCredit:John Platt

The flaws, such as the use on an autistic child as a self-aware truth-teller and the intermittent world-building, are apparent, but it’s hard to lock down the unknown or theoretical. It’s also difficult to watch. Do we want our dramas to show us a future we’re careening towards? It was noticeable that on Sunday night, after a week of grim bushfire headlines, Ten’s I’m a Celebrity… – the epitome of cheery escapism – debuted to impressive ratings.

Writing for Vanity Fair last June, critic Joy Press astutely identified Must-Endure TV: shows such as HBO’s Chernobyl and Netflix’s When They See Us that drew gripping drama from horrific events. Both series, among the best of 2019, were based on historical events. As wrenching as they were, they allowed audiences the comfort of time passing while drawing analogies to present day events. That’s a safety catch that titles which sketch what’s to come don’t possess.

But what’s undeniable is that for every scene or concept where The Commons falls short, another one feels like it’s plugged into a decade that has begun with flames so fierce that they appeared apocalyptic. Timeliness alone gives it a charge. If television is the medium we’re going to turn to first and foremost, then its creative powers will be stretched in contradictory directions. “The best thing about a mess,” Eadie tells a stressed child, “is that you can clean it up.” That’s not always going to be an option for all of us, no matter what we choose to watch.