How many tricky co-workers have you come across? The Computer Says No-er? The Artful Delegator? The Non-Team Player? Work is the place where different personalities are thrown together, and where you are expected to get on with even the "quirkiest" of characters – for a third of your life.

We spend an estimated 92,000 hours working over a lifetime, and a fair few of them will be keeping calm, carrying on and saying to Computer Says No Clive in accounts: "You're telling me you can't file that report for six months so I have to do it myself? Righty-ho, see you at the Christmas party when I'll spit in your pale ale." 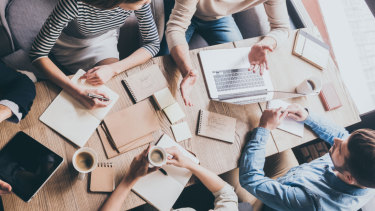 “Building up a rapport is really important; people will trust your judgment more and they’ll listen to
you,” Catherine Stothart says. Credit:Shutterstock

We've all come across a Clive (or a Clare) in our careers. These characters aren't always so cut and dried either – they could be an overbearing colleague, a disorganised scatterbrain, an energy vampire or someone who tells jokes that are far too close to the bone. Basically, someone who isn't our cup of tea.

We're expected to tiptoe our way round colleagues' quirks in the name of professionalism. Sometimes we meet characters who make us miserable, sometimes they're just a daily frustration. Not for a second though do we stop to understand why Clive/Clare behaves the way he/she does. Neither do we stop to think what we are like to work with.

But one person who is asking these questions is Catherine Stothart. A leadership coach by trade, her book How to Get On with Anyone, may hold the answers to a happier workplace.

"The most important way to get on with people at work is learning to be more self-aware. By this, I mean knowing what personality you are, how it affects your colleagues and how they react to you," says Stothart.

So, it's not about buying office cakes every Friday, then? She laughs. "No! You can learn to get on with the people you need to get on with simply by interacting with them in a better way."

According to Stothart, we generally fall into four types of "interaction style" – mobilisers, navigators, synthesisers and energisers.

Mobilisers are quick-moving and energetic. They display determined energy and are driven to achieve an achievable result and get things done. They can be perceived by others as confident, decisive and direct, but also as being a bit bull in a china shop by not listening to their colleagues, and steaming ahead.

Navigators, on the other hand, display more focused energy and prefer to make deliberate decisions at a calm, measured pace. They come across as formal and serious. Unfortunately, they can sometimes be viewed as not very go-getting and lacking in enthusiasm.

Synthesisers are gentle, patient and believe it is worth the time it takes to integrate and reconcile their colleagues' opinions and input. They display approachable energy, and like to consult and gather information. They can be seen by others as unassuming and modest, but also indecisive and slow to act.

Energisers want an "embraced" result. They are persuasive and engaging and like to involve others, share ideas and make collaborative decisions. However, they often get a reputation for lacking focus, throwing in too many ideas and not staying mindful of details and planning.

Stothart tells me the first step to learning how to create workplace harmony is to figure out which of these styles you fall into. "You might be a little bit of one, a little bit of another, but will probably have an overriding preference," she says.

By knowing your own work personality, you will start to become more aware of how your actions affect other people. As Stothart puts it: "You can't change other people's behaviour, you can only change your own. If you can change how you act, then people will change how they act towards you."

So, for example, if you're a mobiliser you may need to slow down, listen to co-workers and get their buy-in.

Navigators might need to speed up and show colleagues how they can contribute and what they need from them. Synthesisers may need to demonstrate more urgency and prove that they have a course of action.

And Energisers may need to recognise when consensus is not needed.

It helps to recognise the categories your colleagues might fall into – although Stothart warns that it's important not to pigeonhole them. "We like to put people in boxes, but people don't fall into them neatly, and there are dangers in making assumptions," she says.

In these pressured times, when we all seem to be doing three people's jobs, Stothart insists that it is all the more important to take the time to get on with co-workers.

If we work better with people, she argues, we will get more things done in the right way. Also, and perhaps even more crucially, we should do so because work is inextricably linked to our wellbeing, with self-worth and confidence forming a big part of who we are. In other words, it's about strengthening our mental health, and that of the people we work with.

"Building up a rapport is really important; people will trust your judgment more and they'll listen to you," Stothart says. "Also, no one comes to work to be intentionally nasty or difficult. They want to do their job to the best of their ability."

So remember, Clive in accounts has other things on his plate. If you approach him on his level, he might then do you a favour and get your report done in time. This will save you the job of spitting in his pale ale at Christmas – although, of course, you were never really going to carry out that threat, were you?

So, does it work?

After years of working on a fast, deadline-driven website, I recognise I am mostly a mobiliser, and that I'm far too impulsive for my liking. Making a conscious effort to slow down has helped me to connect with colleagues and feel happier in myself.

As with all these things, it's not an exact science, but being more conscious of what I do and say is a good habit to get into.

How to Get On with Anyone (Pearson Education UK) by Catherine Stothart is out now.

1. You have been made captain on the office paintballing away day. You …

A. Tell your team your plan: kidnap The Boss until it's time to go home.

B. Take your time to discuss various tactics. No rush, is there?

C. Take a vote: do we paintball The Boss or not? You're still discussing this when The Boss splats your whole team.

D. Ask others what they think the strategy should be. You can't agree, of course, so it turns into a referendum.

A. Still in the office getting a head start with Monday's chores.

B. Still in the office because there are people in your team who are working late. Solidarity!

C. Still in the office because you haven't finished your work – you were helping a teammate with theirs.

D. Still in the office because you have a massive deadline to meet, and you haven't finished your work because you were too distracted in the week. (For the third week in a row.)

3. The office party is being held in a dodgy local pub this year ("costcutting" says The Boss). You …

A. Enforce Hollywood-themed fancy dress. If you have to drink warm wine, you might as well do it glamorously.

B. Tell everyone about how you went somewhere similarly cheap and cheerful and the wine wasn't that bad.

C. Throw a pre-party for your team only with some fancy fizz and cakes.

D. Send an all-office email to see if people want an early dinner first and wait to see where they'd like to go. No one can decide, so nothing happens.

4. A member of your team is about to go on maternity leave. Your first thought is …

A. "Amazing news … let me plan an office baby shower."

B. "Let me email her and ask what she'd like to do for a send-off."

C. "Let me email her close friends and ask what they think she'd like to do for a send-off."

D. "Let me email the office and get everyone's ideas of what to do for the baby shower."

5. There's an office bake-off and you've been split into teams. You …

A. Get a professional to bake a 10-tier cake for your team, complete with sugar-work flowers and ivy.

B. Consulting recipes before opting for a modest sponge that "no one can go wrong with".

C. Organise a cake committee. Plan the cake, talk about the cake for weeks, run out of time. Buy a supermarket cake and slap some chocolate buttons on it.

D. Organise a cake committee. Get everyone baking different parts of the cake and making decorations so you can assemble it together. The finished result looks chaotic, but who cares?

A You are a Mobiliser. You have great ideas but your co-workers have good ideas, too. You might want to tone things down a little.

If you've answered mostly B You are a Navigator. You make decisions, but in your own time. Some people get frustrated with you as they think you're taking too long.

If you've answered mostly C You are a Synthesiser – great at giving your teammates the time of day, but sometimes slow to act. Speed up a little.

If you've answered mostly D You are an Energiser. You want everyone to have their input, but sometimes this descends into chaos.

• When dealing with someone difficult, pretend children are watching to help you to keep a calm head.

• Give compliments. Often, the focus is on what people do wrong.

• Treat everyone with equal respect, from The Boss to the delivery guy.

• Always work at least as hard as anyone working for you.

• Voice ideas but add that others may have equally good thoughts.

• Say no more often, especially when you don't have time to do what's being asked.

• Everyone makes mistakes, so own up when you make one.

This article appears in Sunday Life magazine within the Sun-Herald and the Sunday Age on sale April 28.