The Victorian coronavirus outbreak will set back Australia's economic recovery, Reserve Bank governor Philip Lowe has warned, saying it is unlikely the economy will start growing until the final three months of the year.

Dr Lowe, giving evidence to the House of Representative's Economics Committee, has also revealed inflation is unlikely to get back to the RBA's target band of 2 to 3 per cent for at least three years, signalling no change in official interest rates for a similar period of time.

The government and RBA had, before the outbreak in Victoria, been expecting a lift in the September quarter after a deep fall in activity through the June quarter. 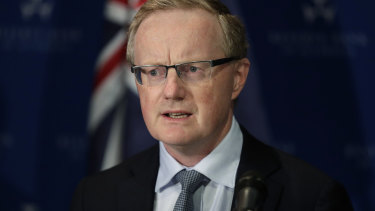 RBA governor Philip Lowe has told a parliament inquiry that the Victorian virus outbreak has set back the national economic recovery.Credit:AP

Dr Lowe said the June quarter was likely to show the economy shrinking by 7 per cent, the largest contraction in "many decades". The events in Victoria now meant it was unlikely the economy would recover sharply.

"We expect the (Victoria) outbreak will reduce GDP growth in the September quarter by at least 2 percentage points. This will broadly offset the recovery that has been taking place in most other parts of the country," he said.

"As a result, we are now not expecting a lift in economic growth until the December quarter."

The RBA cut official interest rates to a record low of 0.25 per cent in March.

Dr Lowe said the bank would not be lifting rates until there was a shift towards "full employment" and inflation was sustainably back within the RBA's 2 to 3 per cent inflation target band.

"Given the outlook I discussed earlier, these conditions are not likely to be met for at least three years," he said.

"So it is highly likely that the cash rate will be at this level for some years."

Dr Lowe said it was clear ongoing government support for the economy would be needed.

He said the construction sector was now facing a scarcity of new contracts, running down the pre-virus pipeline of work it had enjoyed.

Consumers were changing their attitude towards spending, with households and businesses likely to be more cautious in terms of consumption and investment.

The governor said this would all feed into unemployment of around 10 per cent by year's end, with that likely to take some time to fall.

He said addressing unemployment should be high on the nation's list of priorities.

"Looking forward, an important priority will be to boost jobs. Based on the forecast I discussed earlier, high unemployment is likely to be with us for some time, which should be a concern for us all," he said.

"The Reserve Bank will do what it can with its policy instruments to support the journey back to full employment.

"Beyond that, government policies that support people's incomes, that add to aggregate demand through direct government spending and that make it easier for firms to hire people all have important roles to play."