A virtual sitting is on the cards for Federal Parliament with strict rules around how politicians can join via video link – right down to what can be on the wall behind them.

Hard borders and strict quarantine rules have made it nearly impossible for MPs from at least two states, let alone their staff, to travel to Canberra for the fortnight of sittings starting next Monday. 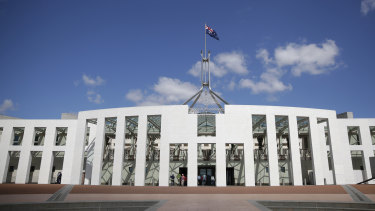 Hard borders and strict quarantine rules have made it nearly impossible for MPs from at least two states to travel to Canberra for Parliament.Credit:Alex Ellinghausen

The lower house is working on arrangements for those unable to make it to Parliament House to give speeches and take part in question time via secure video link from their electorate offices, sources say.

However they will not be able to vote, their numbers won't count towards a presence in the chamber, and it's expected they will have to give 15 minutes' notice of wanting to talk, rather than being able to jump to their feet and be recognised as usual.

Virtual backgrounds might have spiced up many a Zoom meeting during the coronavirus period but they will be strictly banned from Parliament.

Nor will MPs be allowed to have pictures, political posters or any paraphernalia behind them – only blank walls or Hansard books.

They must also stick to the chamber's dress code of professional or business attire.

The Senate is expected to agree to similar rules around senators being able to participate virtually.

Victorian MPs and senators have had to choose whether to undertake a strict two-week quarantine period either in Canberra or at home before travelling to the capital.

Just 12 of the state's 50 representatives have taken up the option.

Former Greens leader Richard Di Natale will give his valedictory speech remotely after deciding it was too hard an ask of his family to make them quarantine or have him absent for a month.

But he says those in charge of Parliament have had to be dragged into allowing virtual participation.

The Victorian senator hopes flexibility of working will be a coronavirus legacy that allows more parents and people with caring responsibilities to be able to join Parliament.

"If you do that you start to encourage a different class of people to represent you," he said. "But if you keep organising Parliament the way it's been done for 100 years, it's no surprise you end up with the sort of representation we've got."

Annastacia Palaszczuk's hard border closure against people travelling from the ACT and NSW has also made it tough for Queensland's 42 MPs, who would have to spend two weeks in quarantine after the parliamentary sitting.

Pregnant MPs had also warned they risked being shut out of parliamentary discussions if the government didn't come to the table and allow those who couldn't travel to use video links.