The first season of The Punisher ended on a terrifying note. Frank Castle’s violent response to Billy Russo’s betrayal was beyond the pale, leading him to begin smashing Russo’s face into the mirrored panels of the carousel they were fighting on. Most thought this was the end of Russo, but as the finale drew to a close, fans were shocked to see Russo was alive, his face wrapped in gauze. Whatever happened next, Castle now had created his own worst nightmare of an enemy. What happened to Billy Russo since fans last saw him? Warning: Spoilers for The Punisher Season 2 follow.

When viewers see Russo for the first time in Season 2, he’s still in the hospital, now wearing a mask to hide his face. To make it more disturbing, Billy has drawn cracks and black spots all over the mask, too. The art was at the encouragement of his therapist, Dr. Dumont, who is encouraging him to dig into his trauma to heal.

There’s just a couple of problems with this. The first is Russo doesn’t even recall his trauma when he’s awake. His memory stops back in the Iraq War. He remembers Frank, but only as his best friend. The only time he recalls the incident at the carousel is in his dreams, but in those images, he only sees the Punisher skull, not Frank’s face.

The other problem is that when Dr. Dumont pushes Billy to remember the trauma when he’s awake, he gets a little violent. Sometimes very violent. Like, breaking-out-of-the-hospital violent. 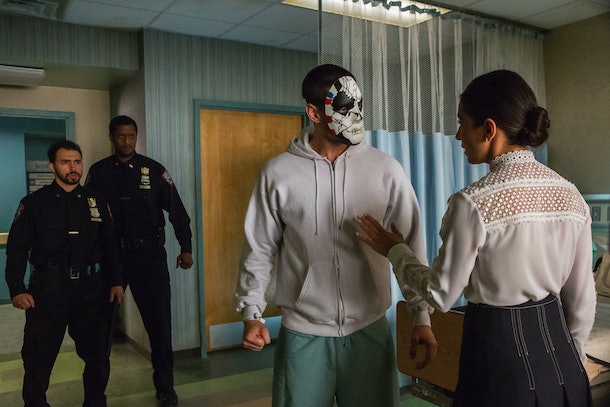 Dr. Dumont, for the record, has been taken in by Billy’s plight, and not only allows him to escape, but when he stalks and shows up at her apartment, a wanted fugitive, she takes him in and winds up bedding him. Turns out the therapist could use a therapist over her own life choices.

There’s only one person in Billy’s life who doesn’t believe he’s lost his memories: Agent Madani, who, as fans of Season 1 will remember, wound up bedding Billy herself before she caught on to what a terrible person he was. Billy also shot her in the head in the season finale, a wound she miraculously survived, at least physically. 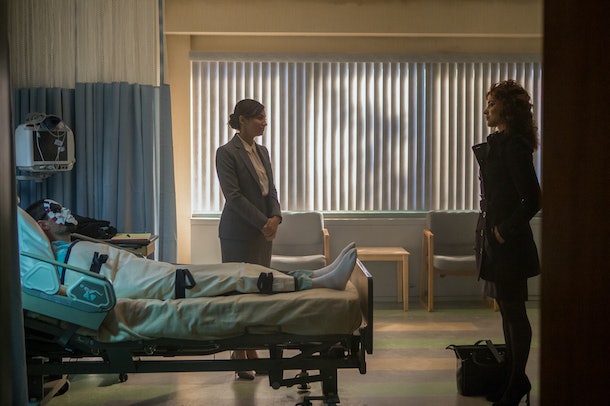 But mentally? Madani is obsessed with Russo. She visits his hospital room every day. And when he escapes, she goes ballistic, especially when she gets her hands on Russo’s hospital diary and sees it’s full of images of the Punisher skull from his dreams.

The lucky thing is, for Madani, Castle only just got in touch with her the day before, having wound up in prison after landing in his own brand new adventure involving a religious hitman and a teenage girl with a few rolls of film in her possession. Madani doesn’t give a damn about any of this, though. She yanks him and the girl out of their situation (using Homeland Security’s equipment and authority) for her own ends. If Billy Russo is loose in New York City, then the best way to take him down is to let The Punisher loose in New York City as well.