Yes, parenting is a series of heart-popping, eye-watering, unimaginable joys, but it’s also a journey occasionally rutted with failure and disappointment – two emotions you’ll see writ large on your offspring’s angelic faces when you stuff up.

Being the father of a daughter seems to provide endless opportunities for this kind of painful parental failure. Indeed, while I fully realised before I had children that I knew very little about women, it was only once I had a little girl of my own that I discovered just how vast my ignorance is. 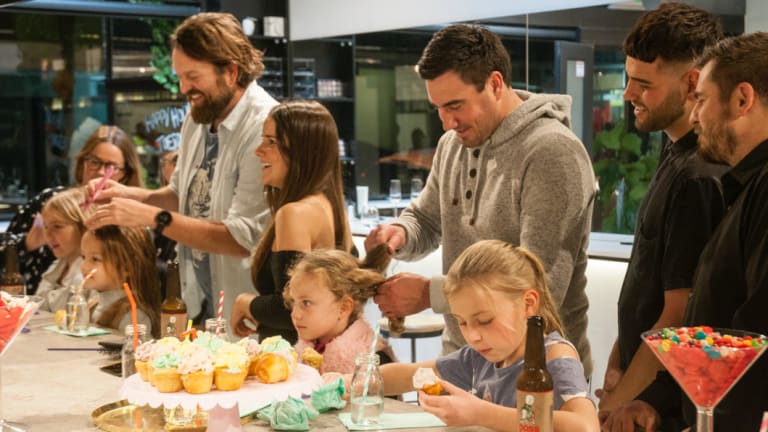 There are many areas in which my daughter finds me bafflingly ill-informed or inept – from putting dresses on dolls, to the importance of make-up and my inability, and reluctance, to walk in high-heeled shoes.

Perhaps my greatest failing, though, has long been my failure to do her hair properly, a lack of skill that runs the full gamut from brushing to braiding and even the seemingly simple pony tail (I tried to explain to her that I thought a “hair lackey” was some kind of barber’s servant, but she was not amused). 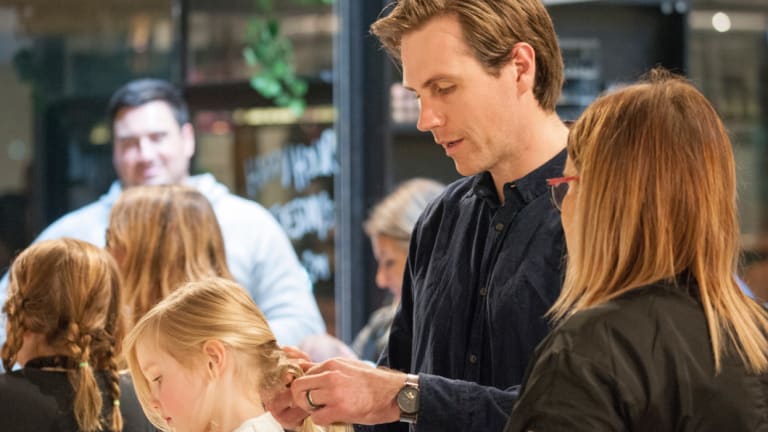 Plaits are difficult at the best of times, Max Wagschall, with daughter Charlotte Wagschall, masters the art.

Unfortunately and heart-achingly we long ago reached the point where she will run screaming from me if I dare to approach her with a hair brush. 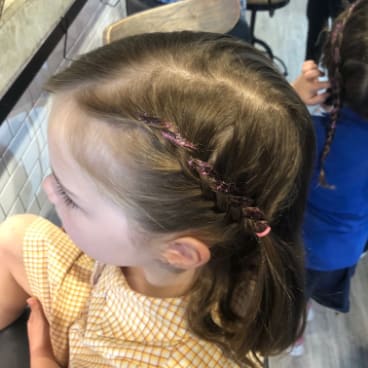 Some of the author’s handiwork after his ‘Dads and Daughters’ hair styling session. Nice.

Thankfully, help is finally at hand, as I discovered that my local Blow Bar (an establishment that has provoked much curiosity from blokes in Balmain – apparently it’s like a hairdressers with no scissors where you get your hair “done” but not cut) is offering a Dads and Daughters Date, where baffled blokes can be taught the dark arts of plaiting and piggy tailing.

Cleverly, this event features piles of popcorn, donuts, juice, and other temptations to keep your daughter distracted and yet highly energised. And, for the dads, beers all round, to help salve those always present feelings of competitive tension. Because even when it comes to doing a young girl’s hair, men want to be the best.

What follows is 90 minutes of blokes making faces that are a mix of awe, confusion and consternation, as they attempt to follow the seemingly simple instructions of the hair-twirling experts while not causing their dearly beloved daughters to scream at them.

Suffice it to say that braiding seems to be some form of witchcraft, requiring fingers not just dextrous but capable of supernatural levels of coordination.

Plaiting is nearly as hard, but almost achievable, or so you think, until your daughter says, sotto voce: “Daddy, you need to stop now, my hair is getting frustrated.”

On the plus side, I did learn some very basic things I’d somehow never managed to pick up before about how to brush hair without making someone yelp (go from the bottom up, apparently), and how to do a pony tail semi-properly (a huge achievement for me, personally).

To reward the girls for their almost supernatural displays of donut-fuelled patience, the experts finally step in to intricately braid their hair for you, finishing it off with a flourish of glitter, which you can choose to apply to your own manly eyebrows as well, if you really want to embarrass your child.

Daddy, you need to stop now, my hair is getting frustrated.

Yes, the small number of skills I learned were wonderful to take home, but really it was the experience of doing something one-one one with my daughter which showed her that, while I may be incompetent and useless, I’m still determined to do my best.