A new season of The Marvelous Mrs. Maisel is finally here, but if you forgot some of the details from the end of Season 1, then you might find yourself a bit lost at the beginning of Season 2. In particular, you will probably be wondering what is going on with Midge Maisel’s manager Susie Myerson during the premiere episode of the new season. To understand that, you will need a refresher on who Harry Drake is in Marvelous Mrs. Maisel. Harry only popped up briefly in the first season of Mrs. Maisel, but he has a profound impact on Season 2, so read on to remind yourself why he is so important.

Spoiler alert: This post will contain details from the premiere episode of The Marvelous Mrs. Maisel Season 2. For the most part, even casual viewers of the first season of Mrs. Maisel should not have trouble following what happens in the Season 2 premiere. The bulk of the episode centers on Midge’s mother Rose starting a new life in Paris after declaring the she no longer feels she has a life in New York City. The only real backstory here is that Rose often went ignored in Season 1, as Midge was unreceptive to her efforts to reunite her with her ex Joel, and her husband Abe often came off too self-centered to really pay attention to her. All of that is easily inferred and explained in the Season 2 premiere, though.

But you might find yourself a bit lost when Midge’s manager Susie gets kidnapped. In the premiere episode, two large men force Susie into a car and drive her to their home, never explicitly revealing why she is being taken. Thankfully, Susie manages to bond with the men and her charm saves her from being killed, but the men warn her that there will likely be more people coming after her. 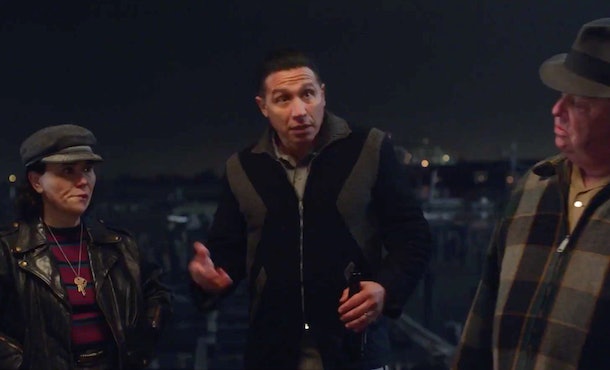 Although the kidnappers never say who hired them, Susie quickly deduces that they must be Harry Drake’s men. It is totally understandable if you forgot who Harry Drake is, since he was not a major role in Season 1, but he looms large over this new season. Harry is Sophie Lennon’s manager who blacklisted Midge and Susie from comedy clubs all over New York at the end of Season 1.

Harry was introduced as one of the more successful comic managers in Season 1, and Susie is able to work out a deal with him to have Midge open for one of his star clients, Sophie Lennon. However, when Midge discovers that Sophie’s salt-of-the-earth act is all a sham (involving a fat suit and a put-on Queens accent) and that Sophie is actually incredibly wealthy and stuck-up, she cannot stop herself from exposing Sophie’s secret at her next stand-up gig. Unfortunately, Harry happens to be in the audience and he is not at all happy about his client’s cover being blown.

It appears that Harry Drake is not content with just blacklisting Midge Maisel from New York comedy clubs, but now he is sending mobsters after Susie, seemingly to kill her. Whoever said that the comedy business was just all laughs?