Niko Valdes, 25, decided to get his own back on his other half, Cristal, after she had waxed his whole body with strips.

In a video posted to his YouTube channel, Niko is seen placing what appears to be a wax strip onto his sleeping wife’s eyebrows.

She immediately wakes up and – when it dawns on her what has happened – Cristal begins tearing up.

“You think you can just wax my legs Cristal without me getting you?” Niko says as he puts more pressure on the “wax” to make sure it is stuck on.

“Why would you do that, please tell me this is a joke,” an emotional Cristal says.

The man then takes his heartbroken partner into the bathroom to try and get the strip off.

“How am I supposed to get this off Nik, it doesn’t come off,” she says.

When Cristal bursts into tears it finally dawns on Niko that he may have gone too far.

He then reveals that the strips aren’t actually wax at all and are just double tape. 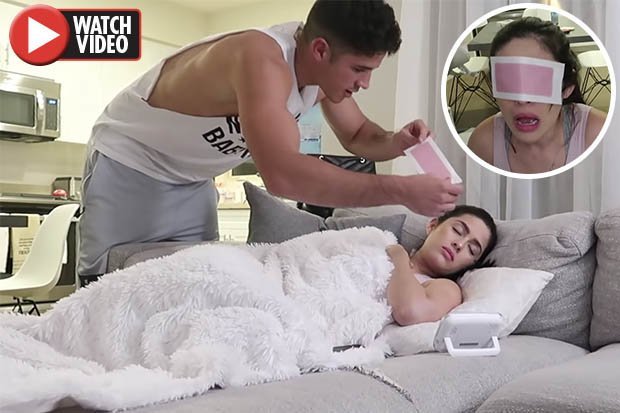 The strips are finally removed and, indeed, it is just her make-up that is taken off.

More than 70,000 people have seen the clip since it was posted on April 17, with thousands of viewers condemning Niko’s actions.

“Really not funny, she would be wise to consider divorce I would say,” one wrote.

Another commented: “It’s not a good prank.

“Eventually, you will keep tricking each other until it will hurt one of u that u decide to separate… be more respectful to your other half.”