After all those months of detailed, intelligent, intricate coaching from Unai Emery, all those hours in front of the video screen analyzing themselves and their opponents, all those days spent on the training field making the finest of adjustments to their body positions, they reverted to type.

The moment that encapsulated it best came not long after Manchester United’s second goal, its second equalizer in this 2-2 draw, though that was telling in itself. That second United goal had come only a minute after Arsenal had reestablished its lead, after Jesse Lingard had found himself in front of Bernd Leno, the Arsenal goalkeeper, with the ball at his feet, almost by accident.

He had wandered there — ambled, even — straight from kickoff. His movement belied no great sense of strategy, no cunning purpose. He took three paces backward after restarting the game, into Arsenal’s half. He jogged a little to his left, turned, and then watched as Romelu Lukaku and Shkodran Mustafi jostled for the ball. 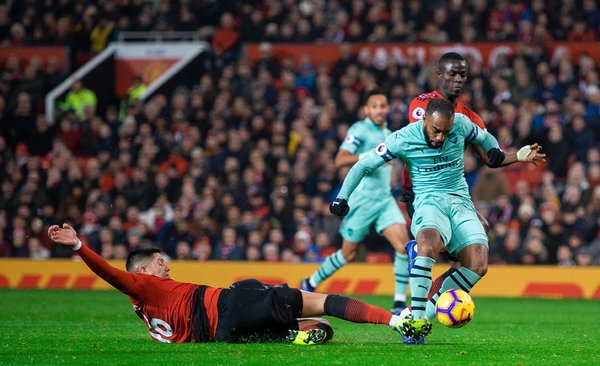 More in hope than expectation, he took a couple of steps forward. Sead Kolasinac, for reasons best known to himself, tried to play a pass back to Leno. It made it only as far as Lingard, who needed a beat to realize quite what had happened, to process the nonsensical sequence of events that led him here, to the point where he was about to score a goal.

More telling still, though, was what happened a few moments after Lingard’s goal. Arsenal poured forward, desperate to atone for the string of errors that had allowed United to draw level. The move broke down. Suddenly, Lingard had the ball in the middle of Arsenal’s half, with three teammates around him. Arsenal’s defense had evaporated, its fullbacks marooned upfield, their responsibilities forgotten in the excitement. United blew the chance, but still. It was all very Arsenal.

This is what always used to happen, of course: the lapses in concentration, the drifting into complacency, the lack of discipline, the shortage of tactical common sense. These were the shortcomings that pockmarked the last years of Arsène Wenger’s reign as Arsenal manager, when his team was always one defeat away from a crisis and rarely more than a set piece away from a defeat.

They were the gifts that would be greedily gobbled up by opponents, the moments that would draw a roar of discontent from fans, the incidents that would come to dominate the post-match inquests and the radio phone-ins and, increasingly, the hyperbolic, performative fan channels on YouTube. They were the proof that Wenger had lost it, that his time was up, that he had to go.

They still happen at Arsenal. They have happened quite frequently recently during this moderately unlikely — and somehow slightly underwhelming — unbeaten run. Some things do not change, or at least they do not change that quickly.

What is different, though, is the reaction. The bile no longer bubbles up so rapidly. Arsenal’s traveling supporters no longer carry with them a sense of imminent mutiny. Not every game seems like a referendum on the future. Not every setback leaves the players on their haunches, staring off into the middle distance, wondering where it all went wrong. It is almost as if everyone involved, for the first time in a long time, feels able to enjoy it all, good and bad alike.

And so, as this game — once the Premier League’s marquee game — descended into a glorious chaos, a contest defined not by either team’s strengths but by their glaring flaws, a reminder that soccer, that sport, is essentially arbitrary and that the temptation to draw sweeping conclusions at all times is to be resisted, Arsenal’s fans did not chide their team for their mistakes.

They did not growl at every misplaced pass, or groan whenever an attack broke down, or harrumph at the sight of a Manchester United player scoring without actually trying. Instead, they sang. They serenaded José Mourinho, thanking him for the job he is doing leading their old rival, and they offered hymns to Emery and forward Alexandre Lacazette and anyone else whose name more or less scanned.

There is no question that Emery, in his five months or so at the Emirates Stadium, has improved Arsenal. He has taken Wenger’s team and — with a handful of judicious, relatively cheap additions — fine-tuned it. Arsenal has tactics now. It can change its formation. He makes substitutions because he thinks it might influence the game, rather than because after 70 minutes of a match, he feels it is what society demands.

He has worked, intensively, with the players he felt were underperforming most under his predecessor, not necessarily instituting major changes in their styles of play but offering advice, tweaks, minor improvements. He has taken a tougher line with those he felt were being indulged, like Mesut Özil, and those who might have liked to be, like Aaron Ramsey.

But Emery is not a magician; five months is no time to transform a club entirely. As is to be expected, some of the old traits — the old flaws — remain, and they will for some time. Arsenal is still Arsenal. It is still a little flaky, a little prone to the occasional stutter and stumble, still finding its way. It is still in danger of missing out on the Champions League next season.

What is different is the reaction to all of that, the way those weaknesses and failings are interpreted, the atmosphere in which they occur. That is the greatest change Emery has wrought, the most important thing he could have achieved in the first flush of his time in the Premier League. Arsenal is not so different, but it feels a world apart: no longer a club wondering where it is going, but one, at last, enjoying the journey.