Australian surfer Julian Wilson will have to wait at least another day to potentially provisionally qualify for next year's Olympics.

Wilson is one of three Aussies in the round of 16 at the season-ending Pipe Masters in Hawaii, along with Jack Freestone and Soli Bailey, but the event has been put on hold due to a decreasing swell. 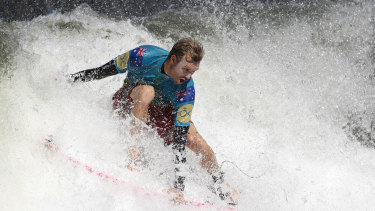 Julian Wilson’s Olympics fate is in the balance in Hawaii.Credit:Getty Images

The next call on when action will recommence will be on Sunday (Monday 4am AEDT).

Irrespective of other results, Queenslander Wilson will join Owen Wright as Australia's two representatives at Tokyo 2020 if he defeats Yago Dora and books a place in the last eight.

Wright was eliminated at Pipeline by Brazilian Dora in the round of 32 but has scored enough points to be one of 18 male surfers on the World Surf League tour to provisionally qualify for the Olympics.

Wilson is 11th in the rankings and progression to the quarter-finals would make it impossible for Freestone to overtake him.

Freestone faces Kiwi Ricardo Christie in the last 16 and needs to win the event at Pipeline and hope for Wilson to lose to Dora if he is to grab one of Australia's spots in Tokyo.

Meanwhile, Italo Ferreira and Gabriel Medina of Brazil and American Kolohe Andino – who have all qualified for the Olympics – remain in contention for the world title with the trio in the round of 16.