Pat Cummins unleashed carnage on India but Australia are still facing a grim fight for survival after an embarrassing batting collapse which rammed home how difficult life will be if Steve Smith and David Warner are exiled forever.

The home side need a weekend miracle if they are to escape defeat at the MCG and keep alive their hopes of retaining the Border-Gavaskar Trophy after India strengthened their grip on the match on Friday. 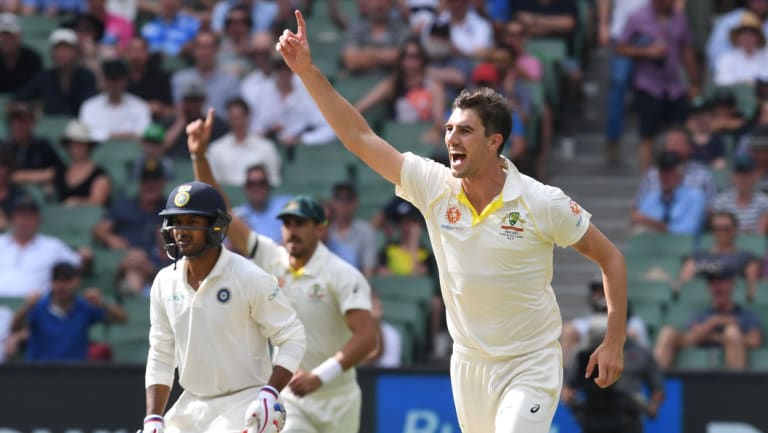 Cummin’s outstanding spell will leave many wondering what could have been had Australian shown more application with the bat.Credit:AAP

At stumps India were 5/54 but 346 ahead despite the dramatic collapse triggered by Cummins, who ripped through the top order with four wickets in eight balls. Given the way Australia surrendered in their first innings, India most likely have enough already. History suggests they have.

Australia's batting has been moderate this series but this was the first time without their suspended lynch-pins they have utterly failed.

It will force their prized quicks to bowl for a fourth consecutive day.

"This morning we were all hoping we’d have our feet up, have a big dent in the first innings score and be right in the game or take the result away from them," Cummins said.

Cheteshwar Pujara and Virat Kohli laid out the blueprint on how to play the slow pitch but Australia took no notice.

"They pace their innings the same the whole way through, they adsorbed the pressure so well," Cummins said. "On this kind of wicket it's hard to score runs, you need to face a lot of balls to get your big scores.

Apart from Shaun Marsh, who was befuddled by a wicked slower ball from Jasprit Bumrah, their frontline batsmen triggered their own downfall.

Instead of playing straight, Australia's batsmen hit across the line. Travis Head and Mitchell Marsh will not be happy with where their heads ended up.

Though Marsh has been applauded by teammates for his role with the ball here, he has made only 119 at 9.9 since his agenda-setting 96 in Durban.

The numbers make for grim reading if your allegiances are with the baggy green.

Australia capitulated for 151 in only 67 overs on a pitch that had been slammed by critics for being too friendly to batsmen. At the corresponding stage of their first innings, India were 2/165. Four Indian players faced 100 balls, none did for Australia. Six Indians passed 30, Australia's top score was 22.

No doubt India had the more favourable conditions in which to bat but few would accept this is an all out for 151 wicket. Kohli would have been upset he did not make that himself. 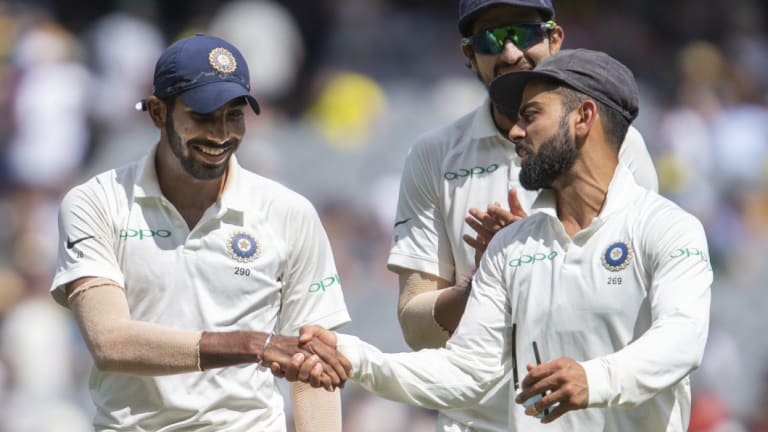 Virat Kohli, right, shakes hands with Jasprit Bumrah after the latter got 6 wickets during play on day three of the third Test.Credit:AP

Bumrah was the destroyer, claiming a career-best 6/33 – the third best return by an Indian bowler behind Anil Kumble and Kapil Dev. The paceman with the short run-up and unorthodox action attacked the stumps and was rewarded grandly.

As a child, Bumrah used throw the ball against the wall at home, aiming for the base rather than bouncing it so as to minimise the noise for his mother. The result is his yorker, which is a weapon.

Bumrah's slower-ball yorker to Shaun Marsh was a stunner, swerving late and dipping under the bat to find his pad.

The tail were also no match for Bumrah, who completed his haul with a pair of thunderbolts.