A sign of an above average three-year-old is the ability to beat older horses early in the season, and in-form filly The Art Of The Bar will attempt that feat at Warwick Farm on Wednesday. 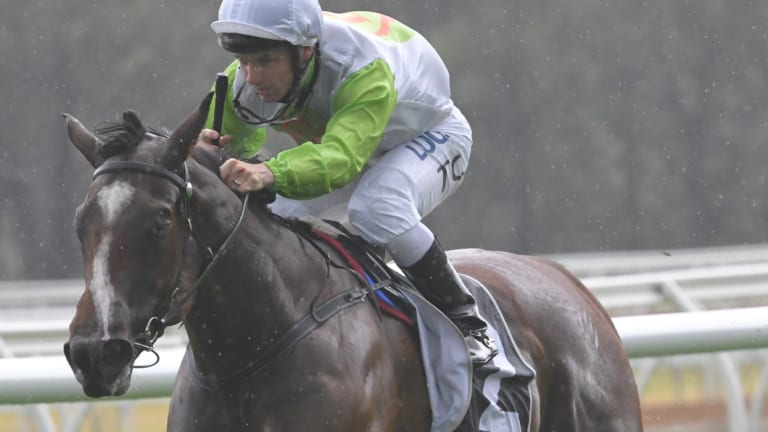 Lapping it up: The Art Of The Bar gets through the heavy going for an easy win at Warwick Farm last week.Credit:AAP

“She’s taking on older horses so it’s another step up for her, and she has to do it on the dry track,’’ Clark said.

“It’s not easy to do, but you’d like to think she will be very hard to beat.

“There are a few extra hurdles she has to overcome but she’s always shown ability, and it’s nice to see her putting it together.’’

The Art Of The Bar will be a short-priced favourite to make it three straight following a  win over 1000m on a good track at Kembla and last Wednesday’s easy win on a heavy track at the Farm.

Enough was thought of the filly by trainers Gai Waterhouse and Adrian Bott to debut in a listed race a year ago, and she was sent out favourite at her second start before finishing fourth behind Graff in April.

“She’s improving with racing, only lightly raced still and hasn’t been this far into a prep before,’’ Clark said.

Meanwhile, the Winx colours will be in action on the consistent Miss Shanti in the Agency Real Estate Handicap (2200m), but she faces strong opposition from an emerging stablemate in Saint Katarina.

The four-year-old has been taken along slowly by trainer Chris Waller and brings winning form to town from a dominant victory over 1850m at Newcastle last month.

It’s a path used with success regularly by Waller, and being the horse on the way up where her rivals are at their level makes her appealing.

She’s been to 2000m once for a second placing back in May and, with the maturity time affords, she should be in for her best preparation yet.