BJ Watling marshalled New Zealand’s tail to keep the home side in command as they posted 431 on the second day of the first Test against Pakistan at Mount Maunganui.

The Black Caps wicketkeeper built on captain Kane Williamson’s hundred and a half-century from Henry Nicholls, hitting 73 and sharing a valuable seventh-wicket partnership of 66 with Kyle Jamieson.

However, Pakistan’s disciplined bowling attack largely kept the brakes on New Zealand and leg-spinner Yasir Shah finished off the innings with three wickets before the tourists reached 30-1 at stumps, trailing by 401.

It took Williamson, who had been 94 not out overnight, until the eighth over of the morning to advance to his 23rd – and slowest – Test ton, drilling Naseem Shah through the covers for a boundary. However, it was Naseem who finally broke the fourth-wicket stand of 133, having Nicholls (56) caught in the slips off a mistimed hook that appeared to have struck his arm rather than glove or bat.

Yasir finally prised out Williamson for 129, luring the batsman forward and finding the edge, with Haris Sohail diving to scoop up a catch that was eventually confirmed by the replay.

However, Watling took up the baton as he and Mitchell Santner (19) lifted the total above 300 before Jamieson (32) unveiled a series of flailing blows against Yasir – some with greater success than others. 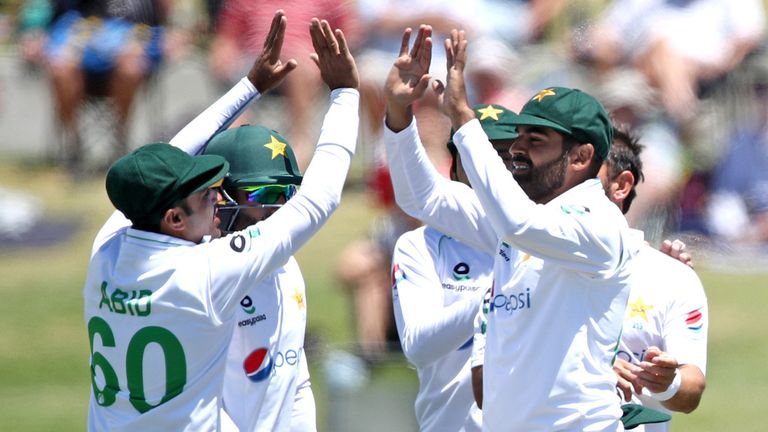 Shaheen Afridi (4-109) eventually got rid of Watling after more than three and a half hours at the crease, with Yasir (3-113) wrapping up the innings by removing Tim Southee (0) and Neil Wagner (19).

That left Pakistan’s openers to negotiate 20 overs before the close and they got through 15 of those before Jamieson struck, having Shan Masood (10) caught down the leg side.

However, Abid Ali (19 not out) looked fairly untroubled and, together with nightwatchman Mohammad Abbas (0no), he saw the tourists through to stumps.