To gain life membership at Essendon, you must do one of three things: play 150 games, give 10 years' service or be part of a premiership team.

Brendon Goddard didn’t achieve any of those things, but as an intimate dinner at the exclusive Cathedral Lodge golf club with players and staff from Essendon and St Kilda came to a close, he became one.

“It was a thank you dinner that turned into more of a retirement dinner,” Goddard said. 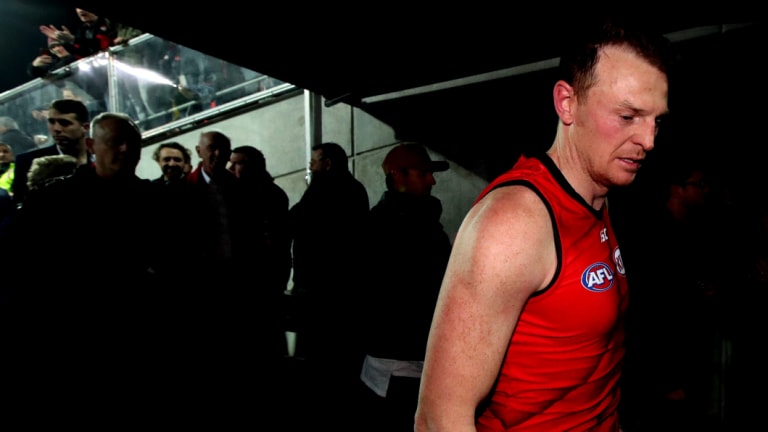 Brendon Goddard has been made a life member at two clubs.Credit:AAP

“(Essendon footy boss) Dan Richardson got up, then Ned (Goddard’s manager Craig Kelly) and then at the end (Essendon CEO) Xavier Campbell got up and I thought he was saying a few words on behalf of the club and then he said he wanted to make a presentation.”

During that presentation, Campbell explained that the club’s board had voted to induct Goddard as a life member because of his “extraordinary service”.

It's a move the club has made only a handful of times in its long history. Senior figures at Tullamarine can’t even remember the last time it happened, but felt it was warranted by Goddard’s contribution to Essendon.

Goddard was blown away. And not in the way in which a player is shocked at winning an award after a dominant year. This wasn’t humility-driven shock. He genuinely couldn’t believe it.

“Oh, I completely couldn’t,” Goddard said, “It didn’t even cross my mind. To say it was a surprise was an understatement.

Goddard knows all to well about what it takes to be a life member at a club. After 208 games, he is one at St Kilda.

“Apparently, the board have the power to hand out life memberships to people who don’t naturally qualify … that makes it even more special.”

Goddard will be formally announced as a life member alongside two of his friends and former teammates – captain Dyson Heppell and star swingman Michael Hurley – after the pair reached their 150-game milestones earlier this year.

Barely 12 weeks after Goddard arrived at Essendon, the club was embroiled in arguably the most devastating drugs saga to occur in Australian sport.

It sometimes gets lost what a pick-up Goddard was for Essendon. He arrived at the club as a 200-gamer, a two-time All-Australian and one of the best utilities in the competition.

But it was off the field that he had to develop quickly when he arrived at his new club.

“It’s easy to be consumed by just football at a younger age,” Goddard said.

“But once you get older you start to understand what’s really important both in life and football.

“My role at Essendon was vastly different to what my role was at the Saints.

“If I had a choice I wouldn’t be playing that role because we wouldn’t have been in that position but I didn’t see it as a burden or anything like that.”

Instead of seeing it as a burden, Goddard used it as motivation to develop his leadership.

As the supplements saga deepened and players were suspended, Goddard captained the club in 2016, when the Bombers won just three games in tumultuous circumstances.

“Everything that happened three months after I arrived … no one had any idea of the magnitude of what it was.

“I mean, personally, it was the prime of my football.

“Two or three years of my football was somewhat wasted, but I look at it as a time that I grew not just as a footballer but as a person and a leader.”

And that’s what symbolises Goddard’s career at Essendon; the personal sacrifices he had to make to the second half of his career.

That’s not to describe him as a martyr, as he couldn’t have foreseen what was going to happen.

He wasn’t a knight in shining armour that came to save the damsel in distress. But he found positive motivation in dire circumstances.

Selflessness is one of the attributes that stands out for Craig Kelly, Goddard’s long-standing manager and head of giant sports management agency TLA.

Kelly was sitting close to Goddard when Campbell announced his life membership.

“The feeling in the room was pretty special,” Kelly said.

“The common theme was that he’s very, well … the general public have a very different perception of what the real man is about.

“He’s a very special person, he’s loyal and he just wants to make places that he’s been at better.

“It’s never about him, it’s always about his club and his teammates.”

And, intriguingly, the football world had to wait until this week to learn of Goddard’s official retirement.

While not many genuinely thought we would be seeing him at a third club in 2019, the possibility still lingered.

And while he was chaired off the Adelaide Oval by Hurley and Cale Hooker, following the Bombers’ resounding final win against Port Adelaide, his retirement was much more subtle.

“The thing of retiring … it’s not important for it to be public for BJ,” Kelly continued.

“I don’t think the public really know the real Brendon … and they probably never will.”

As far as what lies ahead for the 33-year-old, Goddard is remaining tight-lipped. But one thing is for sure, he’s leaving football behind.

“There’s a few balls in the air,” Goddard said with a chuckle, perhaps subtly referencing future plans for his second love, the game of golf.

“I have been planning for life after football. Just taking my time and seeing my family and doing things we haven’t been able to do together in a long time.

“Once I got out of the football bubble and the reality of not returning to Essendon kicked in … I found myself not being desperate or super hungry to get back into it and playing again.

“The reality of playing for someone else and potentially moving, it just wasn’t that appealing.

“I will miss it, it’s what I know and what I’m good at. There might be something in a year or two but for now there will be a gap year … at least.”

Unfortunately, there were three significant absentees who couldn’t make it to Goddard’s farewell dinner: two of his coaches – Ross Lyon and Grant Thomas – and close friend and St Kilda champion Nick Riewoldt.

Kelly, when asked to describe his time working with Goddard, said: “It’s been an absolute pleasure to be part of his football life.”