Cameron Bairstow is no stranger to hitting the floor and bouncing back up.

The former Chicago Bulls and Rio Olympic centre will fall to the floor multiple times a game, usually after wrestling or grappling with multiple opponents for a rebound or loose ball. 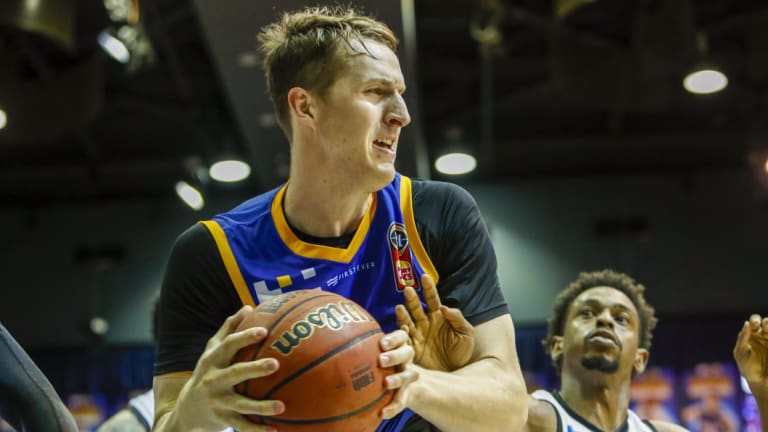 But Bairstow is on a rebound of a different kind after an 18-month recovery from his knee injury, suffered almost two years ago after returning to his home town Brisbane Bullets in the NBL.

The knee injury and related setbacks left him well behind the eight ball physically at the start of this season but the Bullets, coach Andrej Lemanis and his teammates knew the 28-year old centre would regain his touch and he is starting to repay that faith.

During Monday night’s 90-74 win over Melbourne United, Bairstow was at the heart of much of the Bullets’ best play.

At times he would be jostling or wresting for position with Melbourne’s big men; at other stages he was setting screens or taking up space around the basket.

There was an offensive rebound in the second half where he extended his arms and rose through a pack to pull in the ball. In all he had 13 points and six rebounds in 21 minutes.

Bairstow was never a numbers player; his value is usually found outside the stats sheet and within each play as his screens, passing and physical play open avenues for his teammates. That play was what made him so invaluable in the national setup.

Bullets and Australian coach Lemanis spoke glowingly of what he has seen from Bairstow in the past year and a half.

"Seeing him over the last 18 months in and around the practice facility with all the work he has put in to his rehab and getting himself physically right – he had some setbacks as well but he has dug deep and got through that," Lemanis said.

"When you come back from that it is not physical part of it, then it becomes the mental side which I think is a greater challenge.

"First you need to get confidence back in your knee, then in your entire body that you can play to the level you used to play at.

"Then it's the speed of the game. In pre-season games it was really baby steps. We would have some massive victories where he would get through a game, couldn’t make a shot, couldn’t catch the ball but he got through the game, didn’t injure himself, make some spin moves and felt good about it.

"Then we would tick that off and go the next step."

Before he injured his shoulder during the knockout rounds of the Rio Olympics, Bairstow was a key contributor off the bench for the full-strength Boomers and his ever-improving form and fitness are raising hopes he could be back to his best in time for next year's FIBA World Cup in China.

Bairstow was in the extended squad for the Boomers' most recent side and if his match fitness continues to grow he could well be knocking on the door of the side again.

But Lemanis isn't looking that far ahead, he just wants to see Bairstow back to being a regular contributor to the Bullets, who are right in the thick of the NBL finals race.

"We will just continue to see him grow and get better," Lemanis said.

"His aerobic capacity needs to build every week. As we all know he is a really talented player and we have been able to build with him. Now we are at a nice spot where we can rely on him and he is contributing to the group.

"It's a credit to the entire group that no one ever questions or loses their faith in anybody, everyone just continues to help each other be the best they can be.

"I look forward to his continued growth."

Lemanis was coaching Bairstow when he went over on his knee while playing for the Bullets and he takes great joy in seeing him back and making a difference.

"When you see an athlete go down, you just feel so sorry for them," Lemanis said.

"You could see the hurt in his eyes and the 'what now?'

"For some of the guys this is all they have known and it's a really difficult place mentally for them to come back so just to see him out and playing again is such a beautiful thing."