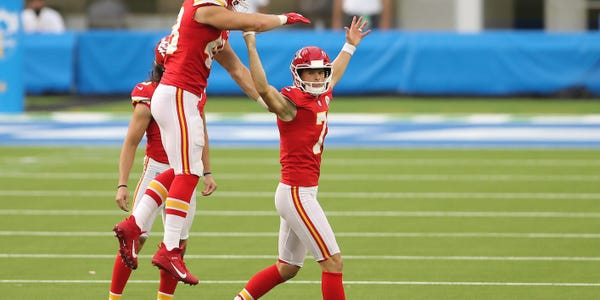 There wasn't a doubt in Harrison Butker's mind that his game-winning field goal attempt was going through the uprights.

On Sunday, Butker nailed a 58-yard field goal in overtime to give the Kansas City Chiefs a 23-30 win over the Los Angeles Chargers.

Perhaps most impressive, Butker hit the kick three times — the first was waved off due to a penalty on the Chiefs that moved them back five yards, and then the Chargers called a timeout to try and "ice" Butker. He nailed both attempts.

On the third and final attempt, Butker kicked the ball, turned, and immediately began celebrating before the kick had even gone through.

It's the kind of long-range marksmanship and confidence that Stephen Curry has displayed before.

After the game, Butker told reporters that the two prior kicks before his game-winner actually helped him warm up.

"To have two practice kicks is only going to help you," Butker said. "I got a little bit more angry with every kick because I was trying to finish it off. I felt more confident on the last one. I slowed down my leg swing and hit a better ball."