Chris Gayle struck 53 off 45 balls in his first knock since January as Kings XI Punjab chalked up an eight-wicket win over Royal Challengers Bangalore in a last-ball thriller in the IPL.

Gayle made an instant impression on his T20 return with five sixes, providing a formidable foil for skipper KL Rahul (61no), whose 20th IPL fifty came up off 37 balls.

The pair shared a second-wicket stand of 93 after Mayank Agarwal had struck 45 off 25 balls, to help steer Kings XI to their victory target of 172.

But the franchise only completed their second win of the campaign after late drama; with two runs needed off the final over, Yuzvendra Chahal conceded just one run off four balls before Gayle was run out chasing a quick single.

With one run needed off the final delivery, Nicholas Pooran held his nerve to strike six down the ground – just about clearing the fielder on the rope in the process.

Kings XI remain bottom of the table but with four points and Gayle back after a bout of sickness, their play-off hopes are not entirely at an end.

RCB went into the match with five wins in seven matches and had the upper hand early on after Virat Kohli won the toss and chose to bat first in his 200th IPL appearance.

The skipper creamed his second ball through the covers for four after RCB had lost a wicket in the batting powerplay for the first time in the tournament – Devdutt Padikkal (18 off 12) poking Arshdeep Singh to extra cover.

Fellow opener Aaron Finch (20) just about saw out the first six overs before he was bowled by Murugan Ashwin’s third delivery as he played back to a quicker ball.

RCB sprang a surprise as Washington Sundar walked out at four ahead of AB de Villiers, who but two days ago smote a spectacular 77 from 33 balls against Kolkata Knight Riders.

Nor did the South African appear at five as another left-hander Shivam Dube appeared once Sundar was well taken in the deep by Chris Jordan off Ashwin.

With the score on 103-3 off 14 overs, RCB needed to up the ante and Dube stepped on the gas to strike back-to-back sixes off Ravi Bishnoi only to then miscue a short ball to hand Jordan his first scalp of the tournament.

By the time De Villiers walked to the wicket there were just four overs remaining – the score on 127-4 – and he had no option but to go hard straight away.

The South African’s adventure proved short-lived as he sliced Mohammad Shami to extra cover to fall for two off five balls and two deliveries later Kohli departed within sight of his fifty, the skipper deceived by a Shami slower-ball bouncer that took the glove and deflected behind to KL Rahul.

Shami’s figures at that stage were 2-21 but were somewhat tarnished in the final over as Chris Morris (25no off eight balls) ended the innings with back-to-back sixes – 34 runs coming off the last two overs.

Kings XI’s decision to keep faith with Rahul and Agarwal at the top of the order ahead of Gayle paid dividends as the pair slapped 33 runs off the first four overs – Agarwal helping himself to 14 runs off four balls from spinner Chahal, including a sumptuous six over long off.

Not to be outdone, Rahul swung Navdeep Saini over midwicket for a second maximum of his own and another six brought up the fifty stand off 5.5 overs – Agarwal pumping Isuru Udana’s slower ball over long on. 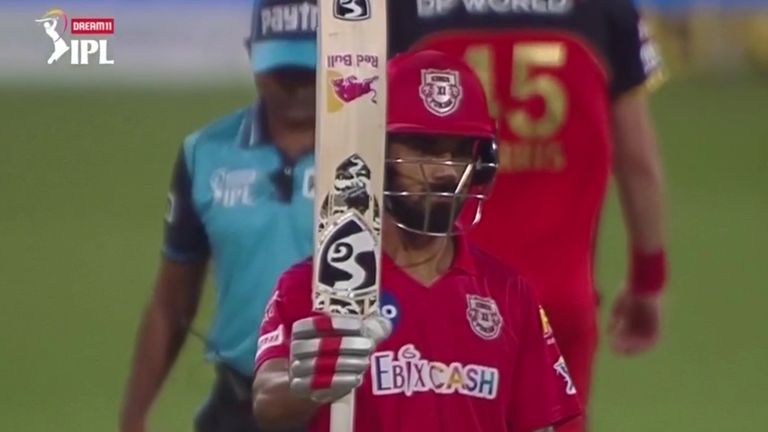 The pair improved their stand to 78 before Agarwal swung across the line and was bowled by Chahal, from which point RCB tightened the screw.

Gayle was typically watchful at the start of his innings, with his timing more than a little rusty, as Saini and Sundar in particular tightened up – RCB 84-1 at the halfway stage.

Rahul’s response was to strike successive sixes off Mohammed Siraj and Gayle followed up by striking his first boundary off his 16th ball and his second maximum three deliveries later.

But thereafter Gayle and Rahul took centre stage with an impressive range of hitting – Gayle helping himself to a brace of sixes in two Sundar overs to put victory within grasp.

Closing out the match seemed a formality only for Chahal to serve up one late twist before Kings XI coach Anil Kumble, agonising on the sidelines, could finally celebrate.

Our live coverage of the Indian Premier League continues on Friday when Mumbai take on Kolkata from 2.50pm on Sky Sports Cricket.