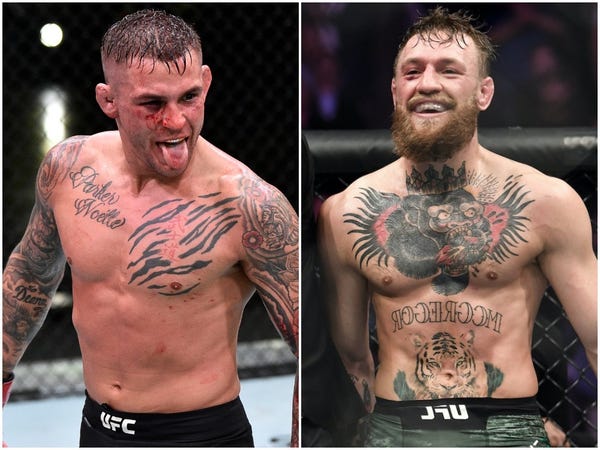 Conor McGregor accepted a Dustin Poirier fight deal after the UFC issued a "take it or leave it" ultimatum.

The fighters had openly discussed a charity MMA exhibition in Dublin later this year but accepted an opportunity to fight for money in the UFC.

Regardless, McGregor told Poirier he would donate $500,000 to the Louisianan's "The Good Fight" nonprofit, which raises funds for local food drives, supplies for schools, and water supplies in Uganda.

Poirier confirmed earlier in the week that negotiations for the fight were "alive" but stressed that there was a scheduling issue — McGregor was adamant that the match had to happen next month or in December.

The UFC's end-of-year schedule for pay-per-view fights is set, however, and the company wouldn't budge on that.

"We offered him a fight, we got him his own date," UFC President Dana White told ESPN MMA reporter Brett Okamoto. "We didn't have a date this year. We have everything laid out for this year, with world champions fighting for titles.

"He's been offered Dustin Poirier on January 23. It's a yes or no answer."

He tweeted Wednesday: "I accept, January 23rd is on! My goal is to see this fight take place in Cowboy stadium. Proper style!

A shot at Khabib Nurmagomedov's title beckons for the winner

A bout between Poirier and McGregor could be a decider for who gets a potential 2021 shot at the UFC lightweight championship.

Poirier and McGregor have both lost to the current titleholder Khabib Nurmagomedov, but would be eager to secure a rematch.

White has long talked-up a super-fight involving McGregor and Nurmagomedov, but it is not the only mega-bout the former two-weight UFC champion has his eye on as he also targets a boxing rules contest against Manny Pacquiao.

He even finished his midweek Poirier confirmation tweet by saying: "Then Manny."