Douglas Lima will jump up a weight class in an attempt to become a two-division champion when he takes on Gegard Mousasi at Bellator 250. The welterweight world champion also speaks about Michael ‘Venom’ Page and Kamaru Usman.

Brazilian fighter Lima (32-7) will look to cement his place as arguably the best fighter in Bellator history when he fights Mousasi (46-7-2) for the vacant middleweight championship.

Lima has been preparing in training for Mousasi who has been victorious in nine of his last 10 fights and defeated Lyoto Machida by split decision last September. 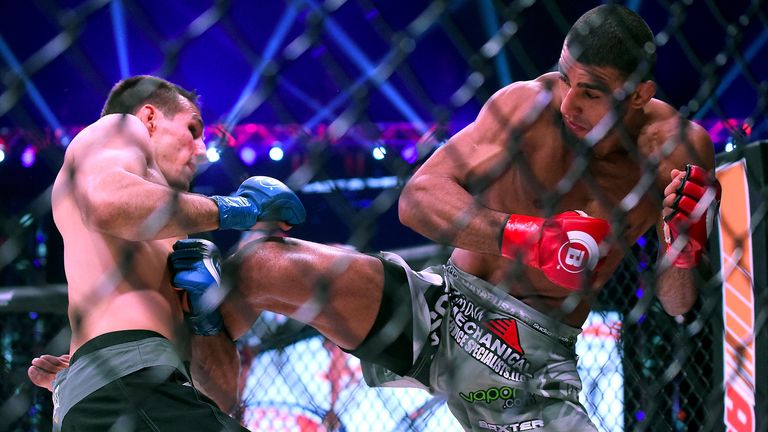 Looking to add another belt to his collection, Lima spoke to Sky Sports’ Ed Draper about a number of subjects, including his legacy.

“I mean I do think about that a lot,” Lima said. “I’m just thinking about a way to win this fight and I need to win it. It does, for the legacy of being a double champion and especially beating a guy like Mousasi, it’s huge, it’s huge for my career. Like I said, he’s a veteran of the fight game and a win over him is super important for me.

“My goal is to defend belts at both weight classes so for that I have to win this fight and stay at middleweight and welterweight. Hopefully after this they will do a middleweight tournament which would be amazing because I will be right at it.

Asked if he gets enough recognition at welterweight with Kamaru Usman making all the headlines in the UFC world, Lima said: “Recognition is getting better and every time that they do talk about this fight with Usman I do get a lot of love.

“People are starting to realise that Bellator fighters are for real and we’ve had guys that have come over from UFC. The real fans know what’s up.

“If that fight with Usman would happen it would be amazing, but UFC has much more to lose. I think it should happen but it’s a bit like boxing. It’s not about the organisation, it’s about the fighter. Let’s find out how who the better fighter is.”

Lima also discussed recent comments by Michael ‘Venom’ Page calling for a rematch with Lima, saying that he does not see ‘MVP’ as a contender for his title.

“He fights newcomers or guys with a four-fight record. I’m not taking anything away from anybody but if he wants this fight he’s got to fight guys that are in line for the title before saying my name.

“I had to go through a tournament to fight for my belt again and if I lose my belt I’m going after the number one guy that’s in line for it, I’m not going to just take any fight.”

Lima added: “A rematch sometimes for me would be much better. I know how he fights now. I know where he’s good and I know where he’s not. Next time it’s going to be even easier. If you think I’m scared of him, he needs to rethink what’s going on. I’m the one in his head. I’ve got bigger fish to fry before getting to him.”

Watch Lima vs Mousasi at the Mohegan Sun Arena in Uncasville, Connecticut live on Sky Sports Arena from midnight on Friday.