The surfer didn’t see the shark when it attacked him for the first time, coming from below him and chomping into the back of his board with its bottom jaw.

He saw the shark the second time; a huge dorsal fin on the horizon and gaining speed before slipping underneath the surface of the water and then hitting him again from underneath.

He started to frantically throw punches, doing whatever he could to save himself. When the shark attacked a third time, he was left with no choice. 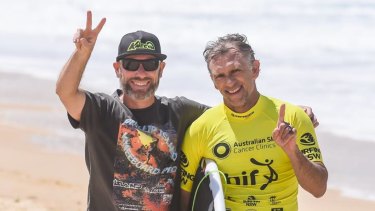 “That’s when I thought, ‘I’m out of there’,” the surfer recalled. “I wasn’t waiting for the fatal blow.”

He started paddling for his life …

The surfer is not three-time world champion Mick Fanning reliving the time he fought off a massive great white shark at the J-Bay Open at Jeffreys Bay, South Africa, in August 2015.

The surfer is Matt Gallagher, 50, a kneeboarder who last week survived an almost identical experience in the mouth of the Bellinger River at Urunga on the NSW north coast. 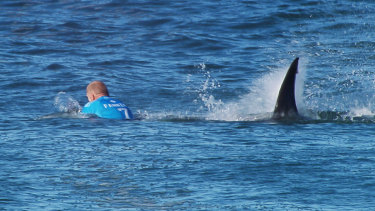 Heart-stopping: Mick Fanning came face to face with a hungry great white during a competition at Jeffrey’s Bay in South Africa.Credit: WSL

Only a few hours after surviving the attack, Gallagher received a text message: “Hi, it’s MF. I heard what happened. If you want to have a chat, call me anytime.”

The “MF” was Fanning, who had heard about the incident from a close friend who knows Gallagher’s younger brother, Phil.

A few days later, Gallagher was ready to talk.

“It was an easy conversation because we’re in a similar club now — not that I wanted to be in it,” Gallagher told the Herald. “It was like seeing a surfer at another spot, having a chat. It was a similar incident. The shark hit and then it turned, only his was massively in the public eye and mine was in solitude.

“He was really good. He had talked to a lot of different people like soldiers, divers and other surfers who had near death experiences. He sourced other people to get his head around what had happened.

“The first thing I asked: ‘How long did it take you to get back in the water?’”

Gallagher has surfed the river mouth at Urunga for about 35 years; often at dawn and by himself. In that time, he’s seen two or three sharks.

At 6.15am on February 4, he paddled from the breakwall on the Urunga side of the river, across the mouth towards North Beach. He’d made the 10-minute paddle countless times before. 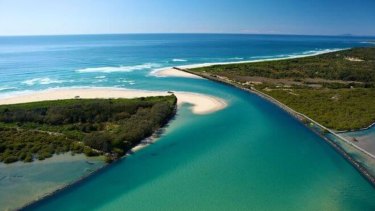 The scene: The Bellinger River mouth at Urunga, where Gallagher was attacked.

“I got over there and I hadn’t even had a chance to sit up on my board when the shark hit me from underneath with its jaws open,” Gallagher said. “It hit me bottom jaw, full force, and threw me up in the air. It didn’t have the chance to bring the top jaw down for the connecting bite, which was my saving grace.

"I came off my board and realised straight away what had happened. I scrambled for my board, got on, and because I was so far away from the beach I just lay there and thought, ‘I will just have to stand my ground and take a chance’. Then it came at me with its fin up from the horizon, right towards me. The fin went down and I’m like, ‘Where is it? Where’s it going to get me?’

“And then it’s come from underneath again on my left side, but not mouth open. Just fully rammed into me. I’m kicking and punching it away from me. It’s disappeared and it’s come right-side and done exactly the same thing; a full charge from underneath.

“I was out of there. I turned, legs up, and sprinted back across the river mouth towards the Urunga-side breakwall. I was paddling flat out but excepting to be chased down, like you’d see in the movies. I was expecting to be mowed down.”

“I got to the waist-deep water and slipped off my board to gather myself. Then I started thinking, ‘Is it deep enough? Will the shark come again?’ I was looking for the fin to pop up.”

A man on the breakwall who had been looking for a blissful start to his day witnessed the entire episode. The pair hugged after Gallagher got out of the water. “I thought the shark had got you,” he told him. 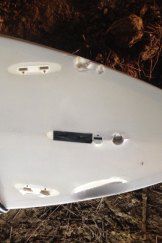 Once bitten: Gallagher’s board, complete with bite marks, after the attack.

Its assessment, based on what Gallagher told them and the photos of the bite marks in his board, was that he’d been attacked by a “juvenile to adult” shark, likely to be a great white or bull shark.

“The fin was big,” Gallagher said. “It was a big hit. The bite is across the width of the back of my board. My only saving grace was that I was using a bigger board that morning.”

“The more I’ve thought about it, if it hadn’t hurled me in the air and just came through a bit higher and brought its jaws together, I wouldn’t have made it. I was that far from the beach, about 200 metres on either side, and with the blood loss I don’t think I would’ve made it to the other side and got up the breakwall on my own.”

Gallagher remains shaken. When he looks at his children — Jamaya, 12, Zephyr, 5, Florence, 3, and Wenonah, 1 — he understands what he would’ve left behind if the shark had beaten him.

He’s yet to return to the water. He took one look at the ocean from the Hungry Head headland on Saturday and started shaking.

He’s spoken to father-of-three Joel Mason, 36, who suffered deep lacerations to his leg after being attacked by a shark at Nambucca Heads, 20 kilometres south of Urunga, on December 10. 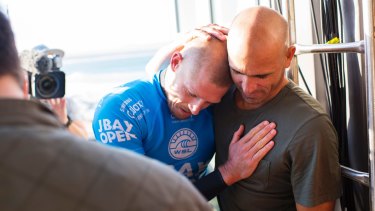 And he’s spoken to Fanning, who returned to the water 10 days after he was attacked and then, a year later, won the J-Bay Open.

“It’s totally on your terms when you return,” Fanning advised. “Everyone’s different. There’s no pressure to get back in the water. There’s no rush.”

Said Gallagher: “Hearing it from a sporting hero of mine meant a lot. Some mates have said to get back into it as soon as you can because you could be out for months.

"Mick said to surf somewhere with more people, different beach, different time of the day. He’s still spooky about J-Bay and that might never go. When he first went back to J-Bay, he caught one wave and came in because he just wasn’t feeling right. He said I might need to feel that myself.”

Yet Gallagher has no doubt that he will surf again.

“I’ll get back in — I’m a surfer,” he said. “The river mouth is where I grew up surfing. It’s my home break. But I’ll just think about my choices. It’s unpredictable. It’s the ocean.”