OLE GUNNAR SOLSKJAER has been mercilessly mocked on social media after forcing a "little wet woman" to hold his umbrella for him during a torrential downpour.

The Manchester United boss was preparing for his side's Carabao Cup clash with Brighton when the heavens opened. 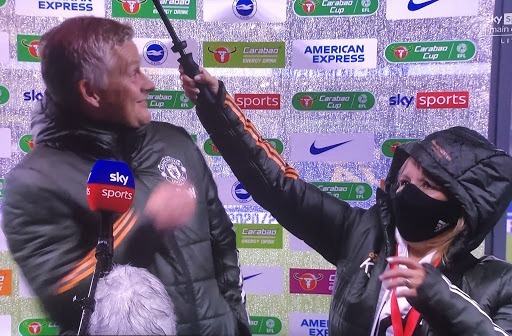 But rather than hold his own brolly to keep dry, Solskjaer had "some little wet woman" – as former X-factor winner Steve Brookstein put it – do it for him.

Brookstein – who won the first series of the singing competition – tweeted: "Raining in Brighton.

"A smiley Ole making excuses with his hands in his pockets while a little wet woman holds his brolly above his head."

Say what you want about Steve McClaren, at least the 'wally with a brolly' held his own umbrella…

And fans were quick to jump on the bandwagon in taking the mick out of United's own 'Ole with a brolly'.

One tweeted: "Hope Ole Gunnar Solskjaer’s arms get better soon, must be a serious injury when you can’t hold your own umbrella!

"Not much social distancing going on either!"

Another let rip, saying: "No wonder Solskjaer can't get this team moving…

"Soft c**t can't even talk and hold an umbrella at the same time."

A third joked: "Can’t hold on to a lead? Can’t even hold his own umbrella.

"This is peak Alan Partridge."