MLS side FC Cincinnati have been ridiculed online following their unveiling of Jaap Stam as their new boss after they posted a picture of the wrong man.

Instead of the Manchester United legend's face, the American outfit used a photograph of Tinus van Teunenbroek – a youth team coach at Ajax. 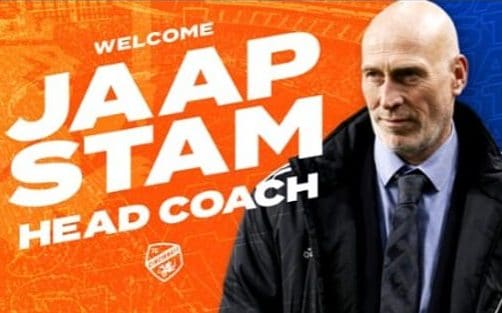 Taking to Twitter to announce their news, the club tweeted: "Join us in welcoming the new head coach of #FCCincy, Jaap Stam."

After fans and fellow clubs poked fun at Cincinnati, a new message went out with the correct photo, as they said: "Join us in welcoming our actual new head coach, Jaap Stam."

In fairness to the club, Stam does bare a striking resemblance to Van Teunenbroek, with the man himself admitting he is often mistaken for the former Reading gaffer.

Upon hearing news of the gaffe, he told Fox News: "I heard about the incident through a mother of a former pupil of mine.

"Everyone now asks if I have made a transfer to America. I have once been mistaken for Jaap Stam in Ajax Showtime [a website] by Ajax itself.

"It happens to me more often, such as on vacation, that people shout: 'Hey, that's Jaap Stam!'''

Despite the swift correction from Cincinnati, they were mocked on social media, with Columbus Crew tweeting a picture of British actor Jason Statham to congratulate Stam to the league.

New York Red Bulls then welcomed Stam with a picture of Arsenal fan Mark Strong, while the Premier League's US account posted a snap of Brad Friedel.

Commenting on the incident, one fan messaged: "This is the best thing to happen in soccer this year."

Another quipped: "You guys hiring a new marketing team? I’m a free agent."

Stam has joined Cincinnati on an initial deal to run until 2021, with a one-year option for the 2022 season.

Speaking to the club's website about his excitement at managing in the States, he said: "For myself, to get the opportunity to work in America and to work in MLS for a club like FC Cincinnati, it's a dream.

"To get the opportunity to work for FC Cincinnati and this project by building the club – hopefully even further than where they already are, because I think they've already done a great job – but being a presence as a team, even more in MLS, getting results and working together with the fans and everybody already working within the club, for me it's a big challenge to do well."

Stam had been without a job since October after he resigned at Feyenoord after just 18 games in charge.