IF YOU’VE ever felt golf needed to be revved up a notch or two, the Finn Cycle could provide the perfect kick start.

The latest thing in golf carts looks like a motorbike, and helps you scoot around the course in roughly half the time it would normally take to play 18 holes. 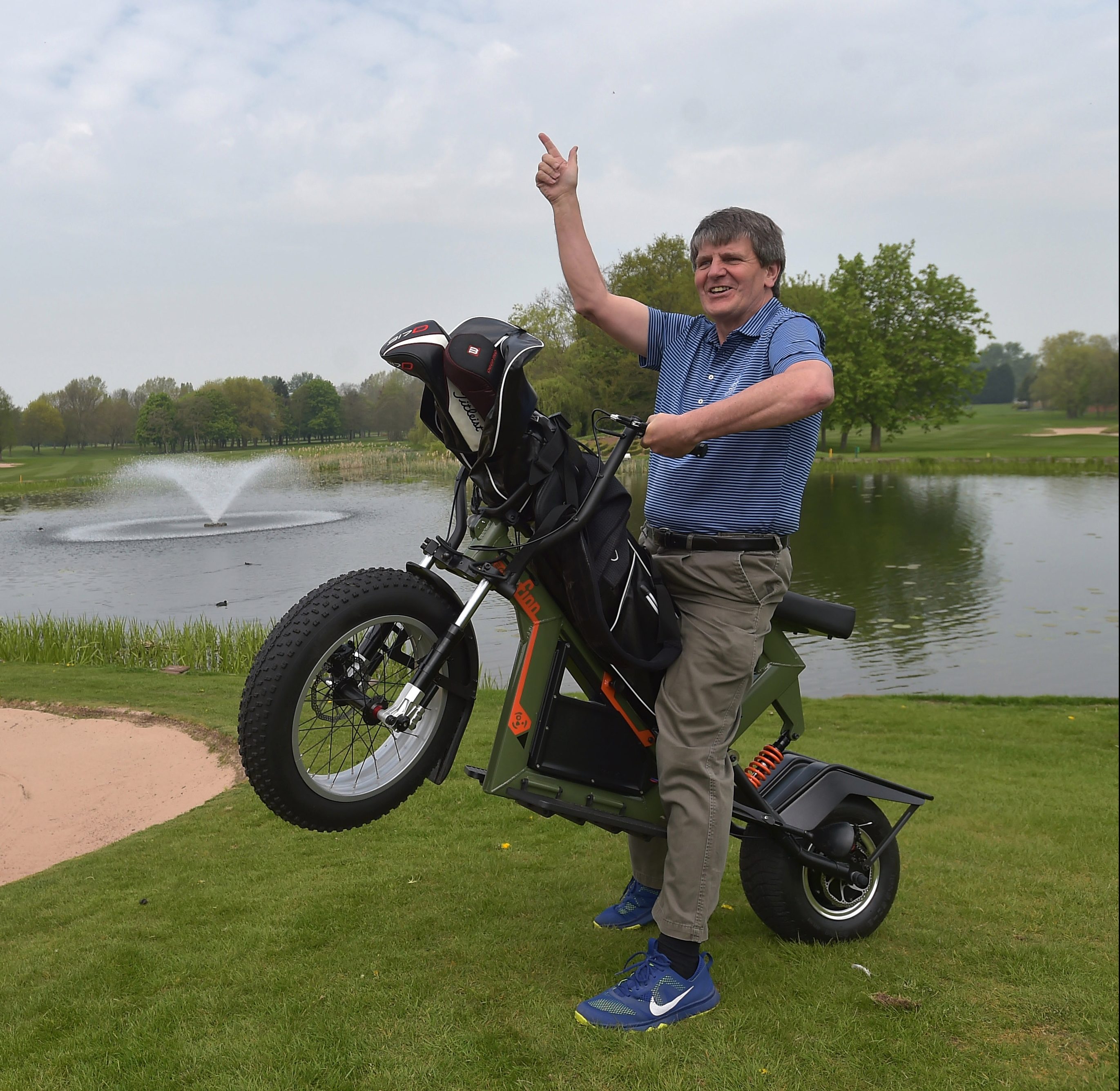 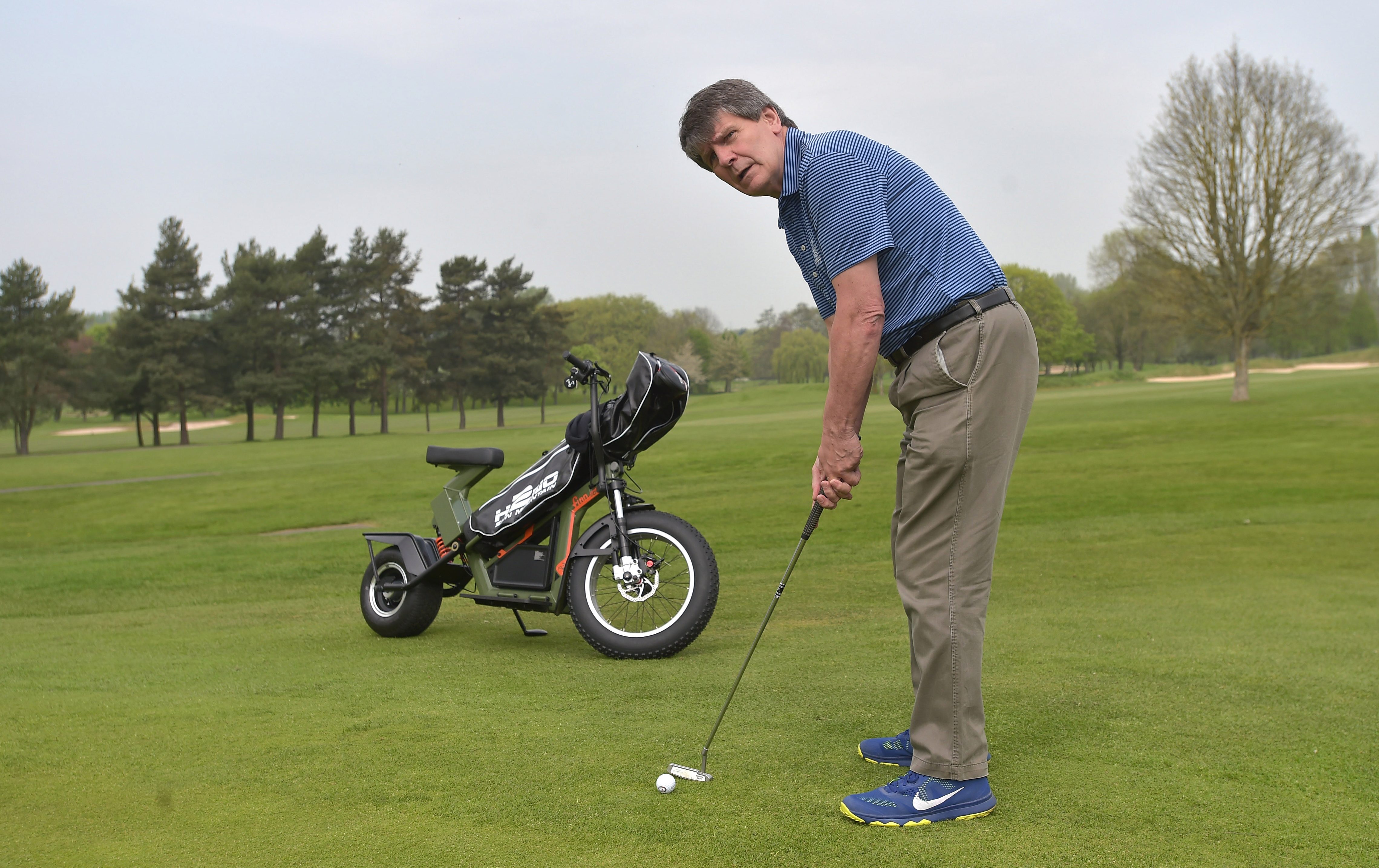 And, just as importantly, it makes golf seem like fun again – especially if you ever imagined yourself as Evel Knievel (ask your parents), or Steve McQueen in The Great Escape (ask your grandparents), but did not want to be quite THAT daring.

And it handles so well that this really is another Easy Rider (ask your – no, just Google it).

Actually, the element of ‘danger’ is all in the imagination. The Finn Cycle has a top speed of 15miles an hour, roughly the same as a conventional golf cart.

But it certainly looks and feels a lot quicker – and cooler. And as UK distributor Nigel Freemantle pointed out, the other big selling point is its flexibility.

He proved that by turning up with two for us to test drive at iconic Ryder Cup venue The Belfry – with both in the back of his Mini!

He explained: “The Finn only weighs seventy pounds and if you take off the front wheel – which is pretty simple to do – they will fit in most boots. And they are light enough that you can lift them pretty easily.

“I did have to put the back seat down to get them both in the Mini, but we don’t use the back seats much anyway.

“And once you get on the course, you can take them pretty much anywhere – in the trees, right next to bunkers and water hazards, and closer to the greens than you would with conventional carts.

“People look at them and say don’t they damage the course more than ordinary carts? But it’s the exact opposite. A normal golf cart weighs around 400 pounds, about six times more than a Finn, even before you put two people in it.

“And the real beauty of the Finn is how much quicker you can play. If you are a hooker and I’m a slicer, it’s off to opposite side of the fairways, and see you on the green.

Their chief executive named it after his dog, Finn, who apparently, is also a bundle of fun. I know, only in America

“When I went over to the States to try them out, on a pretty hilly course in Montana, our fourball played 18 holes in just over two ours twenty minutes, without ever feeling like we were rushing.

“I think everyone agrees slow play is one of the curses of modern golf. Not any more!

“And because it looks so cool, it really appeals to younger people, and those are the ones we want to attract to the game.

“The American company who developed it, Sun Mountain, actually wanted to call it the Fun Cycle – but that name had already been taken.

“So their chief executive named it after his dog, Finn, who apparently, is also a bundle of fun. I know, only in America….”

The admiring looks we got from golfers of all ages – and the constant enquiries of ‘where can I get one ‘ – suggests the young at heart will be just as keen to try it out for themselves.

The reaction was not lost on the Belfry staff, who were immediately keen to lease out a couple of dozen to see just how popular they would prove.

The problem is that it will be at least a few more weeks before Nigel’s company, Brand Fusion International, can get their hands on that many.

He added: “We were promised around five or six dozen by now, but they are selling so quickly in the States that they are struggling to meet demand.

“But we should have enough to take around the country on a road show some time in May, and I’m sure they will prove just as popular over here. The reaction so far has been all positive.”