Friday only deepened the feeling.

While the reigning women’s champion Ashleigh Barty was hoisting a beer and jumping out of her seat in far-off Brisbane at an Australian rules football match, Simona Halep, the favorite to succeed her, was crushing any suspense out of a rematch at Roland Garros.

The opponent was the American teenager Amanda Anisimova. In 2019, Anisimova broke through in Paris, upsetting Halep in the quarterfinals 6-2, 6-4 and dropping her racket on the red clay in shocked delight after hitting a winner on match point.

But that was on a sunbaked day in June, not a gloomy afternoon in September. It was a time when Anisimova was in a more carefree place in her life and Halep was still lugging what she perceived as the burden of being the defending French Open champion after finally breaking through to win her first major in 2018.

But the top-seeded Halep looked like a champion back on a mission Friday, fighting off five break points in her opening service game and then accelerating to win 6-0, 6-1 and advance to the fourth round in just 53 minutes.

“Every defeat is important in my opinion, because you realize what you did wrong,” Halep said. “I got better after that match from last year. I was very, very disappointed, and if I remember really well, it is because of the way I played, not because I lost the match.”

Halep and her coach Darren Cahill had the right game plan, with Halep tighter to the baseline and frequently hitting behind the 5-foot-11 Anisimova to exploit the gaps in her footwork and keep her off balance.

But Anisimova, 19, was still far from her best. She went for too much too soon, missing too many first serves and hitting the net with her powerful groundstrokes again and again as the frustration and the unforced errors — more than 30 in all — piled up.

She looked tight from the start, and though she has the big weapons to succeed at this level, she lacks the aim and the confidence right now.

“This year has been very difficult for me, especially mentally,” Anisimova said. “I’m doing a lot better now, so I’m just happy. Honestly, today I’m just looking at the positives. This isn’t the worst thing in the world for me.” 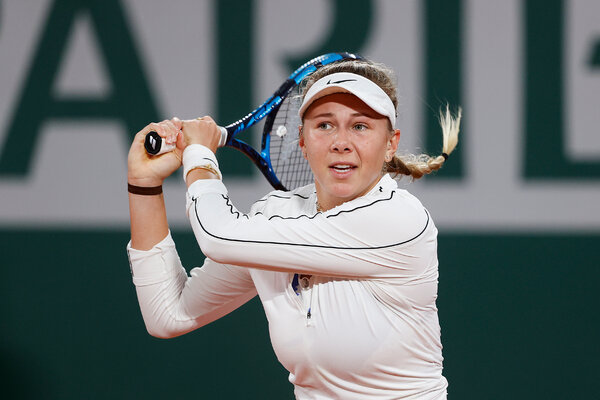 Anisimova’s father and longtime coach, Konstantin, died suddenly of a heart attack in August last year at age 52 not long after Anisimova’s parents had separated. She withdrew from the 2019 United States Open and returned to the circuit later in the year but has struggled to match her earlier results.

Her earnings have increased dramatically since she signed major sponsorship deals, including one with Nike, but she is still searching for consistency on court. She has shuffled through traveling coaches this season while continuing to work with her longtime mentor Nick Saviano when she is at home in Miami.

“It’s been very tough time for Anisimova,” said Lindsay Davenport, a former No. 1 who is now a Tennis Channel analyst. “Everyone can see how good she is and how good she is going to be and the potential. Maybe just give her some time.”

Halep, 29, needed time to find the keys to playing her best when it matters most. Her counterpunching game demands great focus and a high work rate. She is now a major threat on all surfaces. Her straight-set victory over Serena Williams on grass in last year’s Wimbledon final was her most immaculate performance under major pressure.

“That match was perfect,” she said this week.

But clay remains her most natural habitat, even if she also played often on hardcourts growing up in Romania.

“In our nation, the tradition is clay, and she of course got on it very early,” said Virginia Ruzici, the 1978 French Open champion from Romania who has been Halep’s longtime manager. “It is the surface she adapts to most easily. She knows how to move on it, how to slide into the ball.”

Halep has had even more time than usual on clay in this strange, disrupted season. After winning a title in Dubai in February, she needed an extended break because of a foot injury but that turned into a six-month break when the coronavirus pandemic shut down the tour and much of the rest of the sports world.

She let her foot heal and did not play tennis at all for two months and has only been training or competing on clay since returning. She skipped the abbreviated hardcourt season and the U.S. Open because of concerns about traveling.

Despite that decision, she was still eager to come back.

“The pandemic actually showed me how much I love tennis and how much I want to get back on tour,” she said.

She has yet to lose since the restart, winning the Prague Open and Italian Open and extending her clay-court winning streak to 13 on Friday. Next up: a fourth-round match with another teenager, 19-year-old Iga Swiatek of Poland.

Halep said she has continued to work hard on not letting her sense of well-being depend too much on her results.

“The pandemic helped me a lot to change this inside myself,” she said. “I saw that the bigger problems are in normal life, not in our sport. So we have the privilege to play these beautiful and great tournaments. So I relaxed in some way.”

Halep acknowledged that this state of grace was not guaranteed to last. “Might be changed in next year, only a few months,” she said. “But for the moment I have learned also to live in the present, so I enjoy the time and I have learned so many things from the pandemic which I want to keep.”

Focusing on the tournament at hand seems particularly appropriate at this French Open. The men’s tour still has big events ahead this year, including the ATP Finals in London. But the women’s tour has canceled its finals this year, scheduled to be held in Shenzhen, China, and confirmed on Friday that it will not move the tournament elsewhere in 2020.

Some tennis stars have already checked out for the season. Barty skipped both the U.S. Open and the French Open because of concerns about having to quarantine and being able to prepare properly.

Halep chose to make Paris her only major target, and on Friday as she eagerly read the flow of the play on clay like an expert, that looked like the right move.