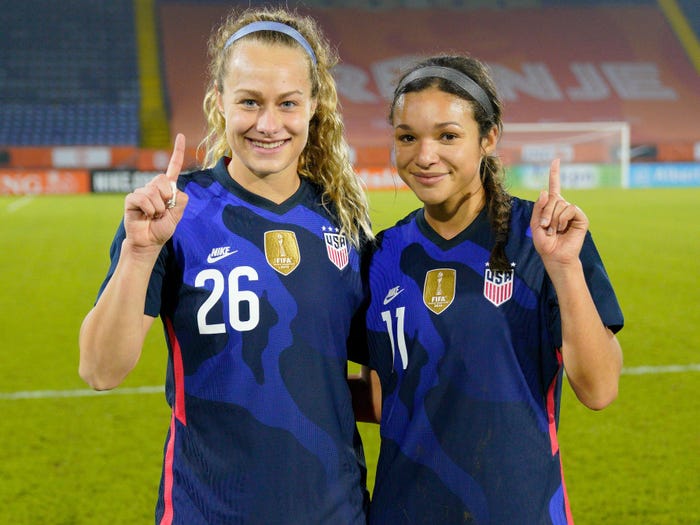 Portland Thorns striker Sophia Smith and Florida State Seminoles standout Jaelin Howell made their first appearances for the US Women's National Team during the team's 2-0 victory over the Netherlands Friday.

Beyond marking a major moment in Smith's and Howell's respective soccer careers, their brief stint on the pitch for the USWNT also served as a reunion for the 20- and 21-year-old pair.

Smith and Howell have a long history as teammates, dating back to some of their earliest moments playing the sport. In kindergarten, the future soccer stars played together for the Timnath Twisters, their elementary soccer team based near Fort Collins, Colorado. They later played club for Real Colorado before going their separate ways for college.

After Friday's game, the official USWNT Twitter account shared a photo of Smith and Howell celebrating their first caps together and paired it with another photo of the duo from back in their Twister days.

After they both earned a call-up to a national team camp back in 2017, Smith and Howell sat down for an interview about their progression through the soccer ranks side-by-side. And even though they became close pals, Smith insisted that it wasn't exactly friendship at first sight for her and Howell.

"I heard there was a new girl coming from Florida, and I was like 'She's gonna be so nice, and we're gonna be best friends,'" Smith recalled. "And then she came into class, and she took my naptime carpet square, and it did not make me happy because that was my spot."

Howell remembered it differently, muttering "that's not what happened" under her breath during the interview.

"And then she whispered in my ear that she was never going to be my friend," Howell said. "I remember we were on the same elementary soccer team — the Tinmath Twisters — and I was like 'Oh my god, this girl is on my team,' and then we actually became friends after that."

Though they've come a long way from their kindergarten soccer days, Smith and Howell are still quite young, especially compared to their USWNT teammates. Smith — who left Stanford this year to begin her NWSL career  — acknowledged that she and Howell sometimes struggle to relate to the "grown-up stuff" other national team players are focused on.

"At meals, they're all talking about all this grown-up stuff," Smith said in 2017. "Like their weddings, and they're about to buy a house, professional teams. And we're sitting here still playing club soccer and talking about prom."

Check out the full clip below: