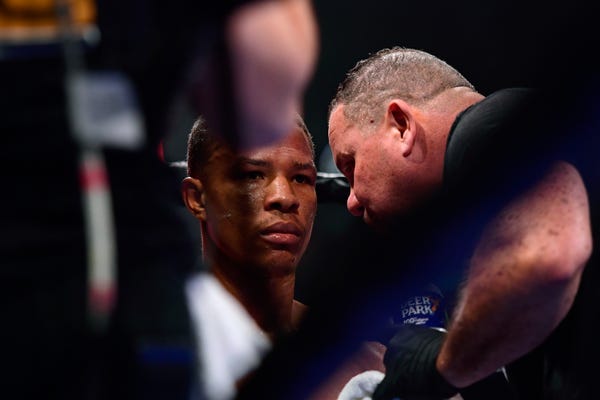 Jeison Rosario began his interview with Insider by thanking God.

The 25-year-old Dominican headlines boxing's greatest event of the coronavirus era this Saturday, and he's come a long way to get there.

He endured homelessness on the tough streets of Santo Domingo, the nation's capital, when he was a teenager. He told Fight Hub TV he lived in cardboard next to a dumpster, and told Insider he had to fight for scraps of food.

He did not know his biological father and a man his mother was dating threatened to kill him, his siblings, and his mom, Premier Boxing Champions previously reported.

The man told a young Rosario he'd use a propane tank and set their cardboard home ablaze. Rosario says he remembers wanting the man dead.

"I didn't have a happy childhood," the super welterweight boxing champion told us through a translator last week, ahead of his high-stakes, three-belt unification against Jermell Charlo on September 26.

At an age when American kids may be playing "Fortnite" against European rivals on an internet connection, or playing soccer with friends in a park, maybe developing a first crush at school, Rosario didn't even have a solid roof over his head.

He experienced a hunger most children won't be able to relate to, and had to quickly transition from a young teenager into a man.

"I didn't have a good childhood that other kids are entitled to," he said, telling us he had to become an adult at 14.

"I had to grow up and become a man way before my years. But the way I see it, that's a blessing, for me, because that's what made me the tough man I am right now.

"Everything that I went through, I feel great about it," he said. "God has a purpose for everybody, and he made me go through what I had to go through as a child, to become what I am now, today.

Jeison Rosario's journey is a rags to riches tale

Fast forward a decade, and Rosario is living differently, training in Miami, a combat sports hotbed for gifted fighters from Latin America.

The bantamweight boxing maestro Guillermo Rigondeaux, and Kimbo Slice's one-time protege Jorge Masvidal, have both helped keep Florida on the fighting map for the Latin community.

He's already fought once this year, returning to the Sunshine State late January with two of the four main championship titles in the 154-pound weight class wrapped firmly around his waist, after he dominated Julian Williams in an upset knockout — one of the big boxing wins of the year.

Rosario told us his family were nervous for him because Williams was so favored to win. But his team's energy during fight week, and the mood in the locker room pre-fight, was different.

"In the dressing room it was very positive and we were very confident because we knew we did the work," he told Insider.

"And we knew we were going to win before we went in there. We were very confident at the press conference and at the weigh-in. We were relaxed, smiling."

Rosario, the underdog, was not supposed to defeat Williams, the champion, so easily.

But he showed great durability, appeared physically more imposing than Williams, and opened a cut on J-Rock's eye in the second round with a jab.

Rosario continued to press the action, moving forward while boxing, and dazing Williams with hooks and straights before flooring the champion in the fifth with a merciless punching flurry.

Unfazed by the referee ruling the knockdown a slip, Rosario forced a stoppage with a devastating right uppercut and left hook combo, after cleverly guiding Williams into the corner with a manipulative three punch sequence.

10 years after sleeping rough, Rosario had done it. And the first thing he did as champion was weep, wiping tears from his eyes wearing the belt for the first time as the division's newest king.

"It's now a new chapter in my life," Rosario said.

"I feel this is the beginning of my career at only 25 years old. We did everything the way we were supposed to in Miami, going into the fight. Now this is it, right here."

Jermell Charlo could be Rosario's toughest in-ring test yet

Against Jermell Charlo, Rosario may be in for his toughest boxing test yet, on the grandest of stages.

The Mohegan Sun Arena in Uncasville, Connecticut hosts the behind-closed-doors bout, but it will be broadcast on Showtime — boxing's first pay-per-view in the US since the sport was forced into a temporary hiatus earlier this year.

The first PPV event begins at 7 p.m. ET / 4 p.m. PT and is headlined by Jermall Charlo's middleweight title defense against Sergiy Derevyanchenko. There is then a 30-minute intermission before the second PPV, which culminates with Rosario's fight against Jermall's twin brother, Jermell.

Insider has already dubbed this the greatest boxing event since Tyson Fury and Deontay Wilder's marquee rematch in Las Vegas in February, before the coronavirus hit the Western world.

Though Rosario is seemingly unfazed, he is well aware he is sharing the ring with a finely-skilled fellow champion.

"What he does really well is that he's strong in every rally and can bully everyone he fights," Rosario said of Charlo, who has notable wins over Vanes Martirosyan, Erickson Lubin, and Tony Harrison.

"His power punches are his strength, and what he does best. But in this case, it's different. He's not stronger than me, and he won't be able to bully me," Rosario said, confident of a victory.

While he told us he is fully focused on beating Jermell Charlo on September 26, he did say one of his goals is to pursue the only other champion in the division, WBO belt holder Patrick Teixeira.

Regardless, it is not the thing which would give him the biggest smile — that's his children. He has young boys, and he is determined to give those kids an upbringing he never had.

"Once I'm done with this grueling weight loss, the training camp, and putting my body through all this pain … when I get home from the fight, my biggest happiness will be giving my kids a hug. Hearing them say, 'Papi, I love you and I miss you.'

"That'll be the happiest moment of my life."

After the life he's already lived, it's the least Rosario deserves.