Never in a million years would any rugby league fan ever expect to see Latrell Mitchell and Will Chambers hugging each other and sharing a laugh.

The two powerhouse centres were at each other's throats for most of last year, including a few push-and-shoves during the Origin series, then again when tempers flared over the sideline in the NRL Grand Final. 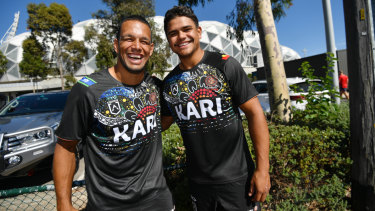 Deadly weapons: Origin foes Will Chambers and Latrell Mitchell will team up for the Indigenous All Stars.Credit:Joe Armao

While Chambers brushed questions over his running battle with Mitchell during Grand Final week, it was a different story when the pair came together on Monday for the Indigenous All Stars – even happily posing for an exclusive photo for the Herald.

"We came straight in, shook hands, had a hug and a laugh,'' said Chambers, who will run out with Mitchell at AAMI Park on Friday night against the New Zealand Maori All Stars.

"Because we don't get along on the footy field everyone automatically things you're not mates. Obviously you guys love the battles. We're just two young men who compete and want to win. We get along quite well off the field. You're mates after the 80 minutes, we know that, we'll have a laugh and a joke.

"Look at Paul Gallen and John Hopoate. They punched the hell out of each other, and as soon as [Hopoate] dropped to the ground Paul Gallen went over to make sure he was OK. 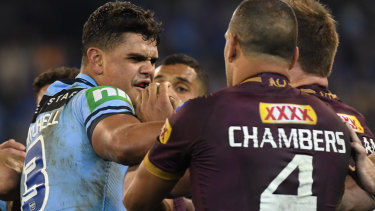 Centre stage: Latrell Mitchell and Will Chambers had a running battle in Origin this year.Credit:AAP

"When you're in the ring or a footy game, you're not best mates, but as soon as everything is said and done you have a beer together. I had a beer with him in Adelaide after the game last year, and that was in middle of the Origin series. We don't hate each other.

"We've had some great battles. He's a great young kid and footballer who will be special one day. You have all seen what he can do on the footy field. Unfortunately I'm on the other side and have to try and stop him and get stuck into those battles.

"I dare say we'll have another couple of big battles this year and the year after, hopefully, if I'm still going around. But he's going really well and he's probably the best centre in the game at the moment.''

Mitchell, who made the big call to pass on the Sydney Roosters' World Club Challenge to remain behind in Melbourne to represent the Indigenous All Stars – and with the blessing of club coach Trent Robinson – was also full of praise for the same bloke who did his best to niggle and put him off his game on Origin debut at the Melbourne Cricket Ground.

After being warned by NSW coach Brad Fittler to try and ignore Chambers and his antics, Mitchell got the upper hand over his experienced opposite and even had the nerve to give him some lip after he scored a try in game two.

"What we have on the field I don't feel the need to bring it off it,'' Mitchell said. "He's a competitor, he takes all those tough carries, he's a leader and I like playing against him because he sharpens me up.''

Mitchell arrived at the decision to play for the Indigenous All Stars a week after he returned from a training camp with the premiers in Queenstown. He floated the idea of skipping the World Club Challenge against Wigan by Robinson and Roosters' head of performance Travis Touma.

Robinson and the club were more than happy to grant Mitchell his wish.

"It was hard to see them go [overseas], but I had to follow my heart and do what I had to do here,'' Mitchell said. "I could tell he [Robinson] was disappointed, but he was supportive, the club was supportive, and I appreciate that.''

Mitchell took all before him last year with his Origin debut, premiership and then Kangaroos call-up.

He and Chambers, who grew up in the Top End, are proud of their heritage and can not wait to spend the week spreading the right messages about healthy choices before trying to stop the Maori Kiwis.

'Ginny and Georgina' Is a New Take on...