The grim reality of life without Steve Smith and David Warner was laid bare on Friday as Australia's new-look batting line-up failed its first examination on home soil, leaving the hosts locked in a grim dogfight in Adelaide.

The glow that radiated on day one began fading minutes into day two. By day's end it was gone, replaced by the increasingly familiar feeling of gloom that has pervaded since the madness at Newlands. 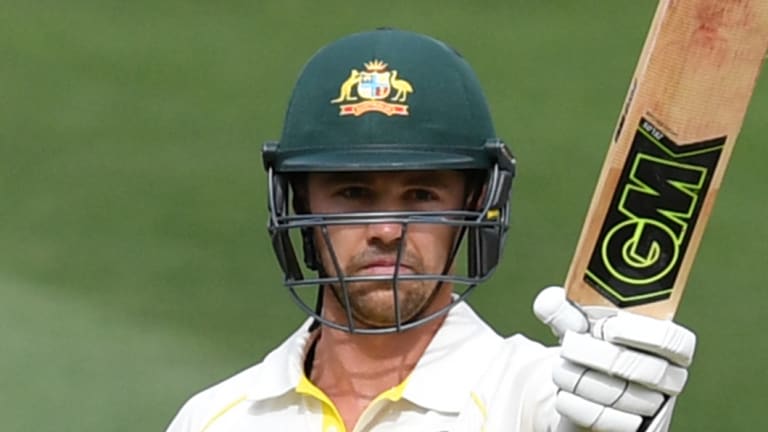 Yet again, it was the troublesome batting that left Australia in the mire as a host of players threw away their wickets against an Indian attack that smothered their inexperienced opponents.

Aside from third-gamer Travis Head, who enhanced his reputation with a resilient half-century, this was the performance of a side that should give Virat Kohli even more optimism that he will become the first Indian to lead his nation to victory in this country.

Going into the series, it was felt that the team with the least frail batting would prevail. Two days in and there's been little evidence to doubt that suspicion.

Ominously for Australia, India's spin wizard Ravi Ashwin is already stamping his influence on the game, claiming three wickets on a pitch starting to misbehave. All victims were left-handers.

Given the trouble Australia have encountered, any run chase in excess of 200 in the fourth innings will create extreme apprehension in the Australian dressing room.

"I see it as neck and neck as far as the game goes," Ashwin said.

"Whoever blinks first or gets momentum from here on has the edge in this Test match. I feel it's well poised and every run will be gold dust from here."

Australia finished day two on 7/191 in reply to India's total of 250, which must feel some distance away, but the message from coach Justin Langer was one of positivity.

"He said we're a pretty inexperienced batting line-up so we'll have days like that but we're still 100 per cent in the game," opener Marcus Harris said.

In the pre-sandpaper days, Smith and Warner were Australia's security blanket. Whatever predicament the team found themselves in, they could invariably count on one of the superstar pair to carry them on their shoulders.

Usman Khawaja can be that saviour, but this time Head was the man who accepted the challenge, demonstrating why Langer was so emphatic the South Australian must play despite recent moderate returns.

The Australian brains trust see Head as a player of tremendous substance, worthy of significant investment for the future. He could perhaps be the poster boy for the Langer mantra of "character over cover drives", though there were some exquisite examples of the latter in his unbeaten 61.

It's the second time he has reached 50 in five innings in the baggy green, and both times they have come against the odds.

While his teammates left former greats frustrated by what they perceived as a lack of intent, Head found the right blend of defence and attack.

Like Cheteshwar Pujara 24 hours earlier, Head earned the right to play his shots late in the day against an attack that inevitably slowed down after temperatures soared into the high 30s.

That he saw off a spell against the second new ball is another tick against his name.

Selectors have been rewarded for their faith in Head but how long can they afford to wait for his fellow newbies?

Aaron Finch waited until just his third ball before launching into a booming drive to a fullish ball that crashed through the considerable gap between his bat and pad and uprooted his middle and off stumps.

It was the type of dismissal which explains why Victoria coach Andrew McDonald bats Finch in the middle order instead of at the top.

Harris did not look out of place in his debut innings but after reaching 26 gave a bat-pad offering against Ashwin. He'll know he wasted a start but forgiveness can be found for a first-gamer.

Less so for Shaun Marsh, who sent social media into overdrive with an over drive of his own. He somehow reached far enough at a wide delivery from Ashwin to get an inside edge that dislodged the bail sitting atop leg and middle stumps. It was equally as reckless as Finch's rash stroke.

Khawaja batted like a man willing to stick it out but on 28 gloved a gem from Ashwin and was caught behind upon review.

Peter Handscomb also failed to kick on but, unlike Khawaja, he gave his wicket away, caught behind attempting to glide a ball down to third man that demanded a straighter blade.