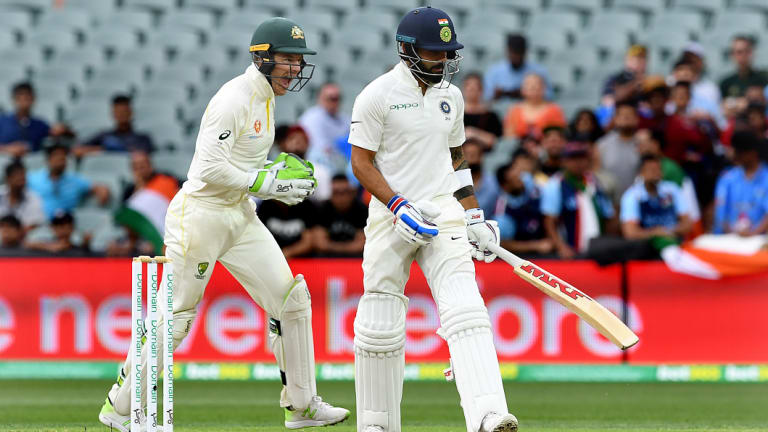 Australian star Travis Head has given his home town crowd a slap after they jeered Indian captain Virat Kohli when he walked out to bat in the first Test in Adelaide.

Head's comments came after coach Justin Langer declared Australia's players would be condemned as the "worst blokes in the world" if they celebrated with the same gusto of Kohli on the field.

The Indian superstar had been jeered by a small section of the crowd when he headed to the crease in the first innings on Thursday and again on Saturday, although there was applause from the local crowd for his strokeplay in his latter knock on what was a grinding day of Test cricket.

The tourists will resume day four on Sunday on 3-151 and with a lead of 166, having bowled out the home side for 235 on a day marred by rain.

Kohli had averaged 98 at his favourite venue outside of India before this Test but has finished this time with three and 34, although he has become only the fourth Indian to enjoy 1000 Test runs on Australian shores, joining Sachin Tendulkar, VVS Laxman and Rahul Dravid.

Head, the South Australian captain who top scored in his country's first innings with 72, was disappointed with the crowd.

"He's a pretty good player and probably doesn't deserve to be booed but that's how it is. It's probably not needed but that's the crowd," he said.

Indian fast bowler Jasprit Bumrah said the jeering had not had any impact on Kohli.

"I don't think all these are important for us. For us, what happens in that circle is important. Everything else we can't control and it is not in our hands. They (crowd) can do whatever they want," he said.

Nathan Lyon's hard toil on Saturday was rewarded with four overs remaining when, with a dipping, spinning delivery, he induced Kohli into a defensive lunge and had him caught at bat pad by Aaron Finch. It's been a frustrating test for Finch and fellow close catcher Peter Handscomb as each have dropped chances, but on this occasion the ball stuck.

On a deck where Indian spinner Ravi Ashwin looms as a match-winning weapon, particularly if he can hit the widening foot marks, the Australians face a major fight to save this Test, let alone win. They will need quick wickets on Sunday if they are avoid chasing more than 250 for victory.

"I think it's slightly in our favour because the late wicket was a good thing for them but we have a good lead. If we capitalise tomorrow, first session will be a very important session, if we capitalise on that, so that will leave us in a very good place in this match," Bumrah said.

The home side will need to find a way through batting rock Cheteshwar Pujara, who will resume on 40, having shown unfailing concentration in the first innings to notch this third century against Australia. Pujara survived two tight decision reviews, the second off Lyon after the batsman had initially been adjudged lbw.

"He has shown a lot of patience. That is the key element in Test cricket. He knows his game in and out, he knows his strengths. He is playing around that strength," Bumrah said.

"He knows to leave the ball. He is playing with the bowlers' patience as well. He has done that over the years really well. He has tried to play with a lot of maturity. That is his strength, so obviously a great knock and hopefully that continues."

Bumrah, the man with the unorthodox bowling action on his first tour here, claimed three first innings wickets, and will have an even better grasp of the conditions on offer when the tourists take the ball for a second time.

"We were trying to figure out the lengths that are useful here. When we played in South Africa and England, there was a lot of movement, a lot of lateral movement," he said.

"Here, the wickets are slightly flat because you get a lot of bounce but you have to be consistent. This is what we have read over the years. We are trying to focus on that. If we don't give up runs, we are creating pressure runs from both ends, so that we can get wickets."