CHARLOTTESVILLE, Va. — There are two ways, said the sports psychologist Michael Gervais, for a team to respond to the stress that comes when thoughts of a particularly painful defeat are dredged up.

One is to think about situations in which the dreadful memory will re-emerge and face it down, talk about it, plan how to respond.

The other is to move on. Period.

“For some people,” Gervais said, the latter option “is the correct choice.”

“For most of us,” he added, “that seems fine until we get close to the environment that feels or smells or looks like the first environment.” At which point, he said, it becomes apparent that things should have been thought through a little more.

The Virginia men’s basketball team is approaching such a situation. In the first round of the N.C.A.A. tournament last year, the Cavaliers had a meteor land on them. They became the only No. 1 men’s seed ever to lose to a No. 16, falling to the Retrievers of the University of Maryland, Baltimore County, by 20 points. 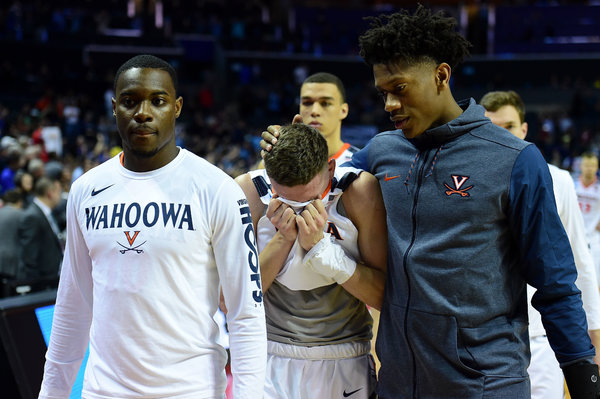 Last year’s loss initially devastated Virginia’s players. Kyle Guy, a guard who is now a junior, wrote a moving Facebook post in which he described walking around campus knowing that everyone knew why he was wearing a hoodie and sunglasses. “There aren’t many people who know what it’s like to be the ONLY person (program in this instance) in the world to be on the wrong side of history,” he wrote.

But six months after that, in Charlotte, N.C., for a media day, Guy was singing a different tune — in the same building, no less, where the awful upset had occurred. “For me, it’s never forgetting it,” he said, “but definitely trying to move past it to where I’m not hanging my head.”

“We’ve grown from that experience,” he told reporters. “We’ve owned it. We’ve talked about it. We had a great year last year and a hard loss. But it’s time to press on, and there’s not any more to say about that.”

Through a spokesman, Bennett declined a request to discuss last year’s tournament loss in an interview. In other words, Virginia appears to have chosen Gervais’s Option B.

Fans aren’t quite there, at least not those interviewed before and during the Cavaliers’ final regular season game, a win over Louisville. They had not quite moved on.

“I want people to stop talking about losing to a 16th seed,” said Nicole Vaughan, a fan waiting to watch the game at a sports bar that had been converted from a train station not far from the university’s John Paul Jones Arena.

For some, the demons that Virginia will face Friday originated before the upset by the Retrievers.

Virginia’s basketball pedigree — two Final Fours in the 1980s and a tremendous recent run — looks impressive until measured against the achievements of A.C.C. rivals past and present, like Maryland, Duke and North Carolina.

The greatest Cavalier ever, Ralph Sampson, was a three-time college player of the year and a No. 1 overall N.B.A. draft pick who took Virginia to a Final Four but never won a conference tournament. His teams were stymied by the great Tar Heels squads of Michael Jordan and James Worthy, and by North Carolina State’s miracle national champions of 1983.

As the Cavaliers have won or shared four regular-season A.C.C. titles during the last several years under Bennett, there has been a string of N.C.A.A. tournament disappointments. Last year’s loss was the third time Virginia had been defeated as a No. 1 seed.

“Part of their depression, for lack of a better word,” Jerry Ratcliffe, a longtime local sports journalist, said, referring to the fans, “went back to when they lost to a really good Michigan State team in Madison Square Garden a few years ago, and they felt like that team was Final Four material. And the collapse against Syracuse a couple years ago — that definitely was a Final Four team.”

Then, too, there was the style of last year’s defeat. Virginia found itself trailing early in the second half, and Bennett’s team, famous for a careful, slow style of play that critics say makes it susceptible to upsets, failed to erase the deficit.

“Now you have to hear it forever,” said Tyler Pearson, another patron at the restaurant to watch the regular season finale. “Everything they said is true: The system doesn’t work; if you fall behind, you can’t come back; Tony is stubborn.”

This year’s Cavaliers are almost certainly better than the team that lost to U.M.B.C. They had just two regular-season losses, both to Duke, the tournament’s top overall seed. They retained most of their leading players from last season while adding Braxton Key, a transfer from Alabama, and the freshman Kihei Clark. De’Andre Hunter, a sophomore who did not play in the U.M.B.C. game because of a broken wrist, might be this season’s national player of the year if Duke’s Zion Williamson did not exist. And he is healthy.

So how to view the upset loss to Florida State in the A.C.C. tournament semifinals last weekend? Perhaps it will be a boon, one player suggested, providing Virginia with a scare to motivate it.

“I remember we cut down the nets in the A.C.C. tournament last year, and we didn’t like the way our season ended,” guard Ty Jerome said after the A.C.C. semifinal, making only a glancing reference to the loss that shall not be named. “This isn’t the end-all, be-all by any means.”

Payton Souders, a student whose parents are alumni, said she thought the consensus about Virginia is that it’s a “really experienced team.”

Sipping a beer not long after the score of a U.M.B.C. game flashed on the television, Pearson made something close to a promise.

“Put all your money on Virginia that first game,” he said. “Nobody’s ever lost to a 16 seed two years in a row.”

Souders is running the bracket pool that her sorority, Alpha Chi Omega, puts on every year for charity. She has found that many of the hundreds of entrants have picked the Cavaliers to win the whole tournament.

“I’ve been a little cynical,” she said in a text this week, “and people have gotten a little mad at me for it.”