Before every game, as he puts on his catcher’s gear, Gary Sanchez silently braces himself for the job’s inevitable surcharge — the dings and dents and body shots that require bravery, if not a touch of masochism, to endure night-in and night-out.

“You can never be afraid back there,” Sanchez said.

Absorbing punishing blows are part of the catcher’s job, but nothing hurts as much — and nothing causes as much damage — as a foul tip that glances off the hitter’s bat and goes straight into the catcher’s mask, rattling the brain and sometimes causing a concussion.

The trauma can last for a moment or a few hours. In some cases, it can end a career: the former Cardinals manager Mike Matheny, a four-time Gold Glove winner as a catcher, retired after a series of concussions in 2006. The umpire Dale Scott did the same after missing nearly the entire 2017 season with head injuries.

And this month, Pirates catcher Francisco Cervelli hinted that he, too, had reached a breaking point after a sixth documented concussion. He suggested he would likely stop catching (though he later walked back those comments).

Those who have gone through it describe the experience in disquieting terms.

“Your ears start ringing, you lose the sense of where you are and then the headaches start coming,” Rays catcher Travis d’Arnaud said. “I’ve had back-to-back pitches get me, straight on, and I couldn’t even stand after that. They had to take me out of the game.”

Robinson Chirinos of the Astros likened the impact to a thunderous “boom.” It not only staggers a catcher, he said, but leaves him wary of the next pitch, which can significantly increase the risk of long-term injury if it makes contact.

“You definitely don’t want another foul tip right after you’ve had a bad one,” Chirinos said. “You’re thinking, ‘Please, not again.’” 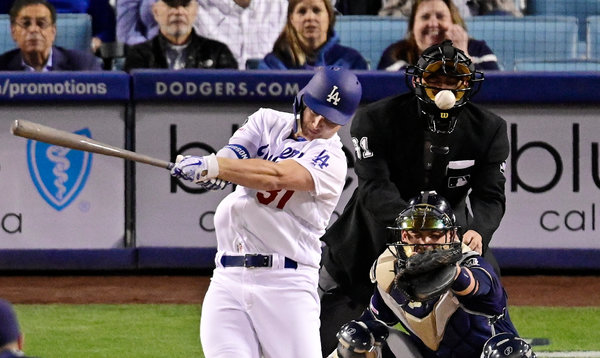 That fear is not unwarranted. Head trauma experts say the brain is exponentially more susceptible to a severe concussion after an initial blow. At speeds of around 90 to 105 m.p.h., depending on how hard a pitcher is throwing and the force of a hitter’s swing, a baseball can feel as devastating as a punch from a heavyweight boxer.

“The cells are, in a sense, stunned,” said Chris Nowinski, the chief executive of the Concussion Legacy Foundation. “You have this ongoing struggle for the cells to get the energy level back to normal. It’s an intense time frame for about five minutes.”

Umpires are just as vulnerable, especially the ones who set up in what they sometimes call the “kill zone” — the space directly over the catcher’s head or over his right shoulder during a right-handed hitter’s at-bat. That’s where umpires are most at risk.

“The moment you get hit, all you see is white, like a bright light,” the former umpire Jim Joyce said. “And believe me, it hurts like hell.”

Scott, who had four concussions in the last five years of his career, including two in the final ninth months, agreed.

“The first thing is, it’s loud, it’s like an explosion,” Scott said. “It’s like you almost go into shock. The last time it happened to me, my mind wasn’t on the next pitch. Instead I was thinking, ‘Is the next one the one that’s going to take me out?’ That’d never happened to me before. That’s when I knew it was time to get out.”

Unlike football or hockey players, who can retreat to the bench for treatment before returning to the game if they are not seriously injured, a catcher has only a few moments to decide if he can continue. Dangerous as it might seem, most do, falling back on a credo of toughness and commitment.

“This is what you sign up for,” the Yankees’ Austin Romine said, adding: “A football player will tell you the same thing — it’s part of the job. I’ve accepted it because I love being a catcher.”

After a particularly hard impact, a team trainer might rush out and administer an impromptu concussion test, asking what day it is or in what city the game is being played. But a few seconds is too small a window to properly diagnose a potential trauma.

There has been discussion among Major League Baseball’s leaders about someday introducing a free substitution rule for catchers, according to a person with knowledge of the talks who was not authorized to comment publicly on them. A new rule could allow catchers to leave the game for a set number of minutes or innings for a medical examination, with the possibility of returning to the field if they are deemed healthy enough.

Baseball’s current protocol has no such rule, although it created a seven-day Injured List for concussed players in 2011, as well as mandatory baseline testing in spring training. But so far catchers receive no special privileges, despite their peers’ sympathy.

In the moments after a foul tip collision, the hitter often shares a sense of helplessness — and perhaps a twinge of guilt knowing their biggest swings are responsible for redirecting the pitch into the mask.

“I’ve done it to a number of catchers, I’ve had them go down right in front of me,” said Yankees outfielder Aaron Judge. “It’s a terrible feeling. I try to step out of the box, play with the dirt, give them a little time, but there’s really not much you can do. I’ll say to them, ‘Please tell me you’re O.K., talk to me, say something.’”

The randomness of the effects also complicates how catchers or umpires deal with them. Experts say no two blows to the head are the same. “A foul tip in the first inning might not have any effect at all,” said Josh Bloom, the medical director of the Carolina Sports Concussion Clinic. “But in the ninth inning, depending on how fatigued and dehydrated a catcher is, the same foul tip might cause a concussion.”

For extra protection, many catchers are now using the Force3 Defender mask, which uses a spring-cushioned, shock-absorption system that reduces the force of an impact. “It’s an improvement for sure,” d’Arnaud said.

There is a small consolation, if it can be called that: Because catchers take blows straight-on and not in a rotational swivel — like a boxer being hit in the chin by a hook — the chances of long-term brain damage seem to be reduced.

“It’s why you don’t see a lot of punch-drunk retired catchers,” Nowinski said.

Still, it takes a special breed to agree to such punishment. The 6-foot-7, 260-pound Judge is one who admittedly could not.

“I could never be a catcher,” he said. “With what they go through? No way.”