The Toronto Raptors moved closer to the Eastern Conference Finals with a massive, 125-89 Game 5 win over the Philadelphia 76ers. They now lead the series 3-2.

Though the Raptors got much better overall production from their entire team, it was once again Kawhi Leonard who made the standout plays.

To close the second half, Leonard brought the ball across mid-court, ran the clock down, then drove to the basket, slithering through the 76ers defense to create a sudden hole for a massive dunk.

Note how Kyle Lowry scrambled to set a second screen on Joel Embiid which freed up Leonard for the dunk. It served as a snapshot of the Raptors chemistry in the blowout win. 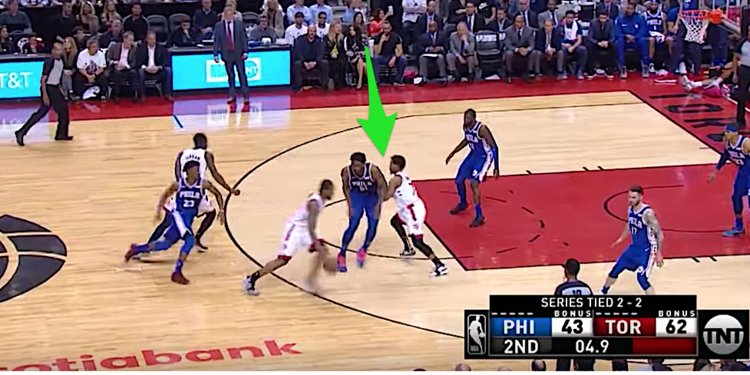 In the second half, Leonard made another statement, with a slightly less explosive, but nonetheless demoralizing, dunk on Joel Embiid.

The play somewhat summarized Leonard’s series so far — poised and slipping, fooling Embiid with the hesitation before rising up over him.

Leonard finished the game with a modest line of 21 points on 7-of-16 shooting, 13 rebounds, 4 assists, and 2 steals. He was a +20 for the game, and the Raptors have now outscored the 76ers by 46, a large margin when considering the overall difference between the two teams in the series is just 28.

Leonard is averaging 34.6 points, 9.8 rebounds, and 4 assists per game on 58% shooting. The Sixers have had no answer for him, and will need to hunt for one heading into a do-or-die Game 6.