AND then there was one.

Ross Barkley’s stunning 90th minute winner means Aston Villa are now the only team in the country to boast a 100 per cent record. 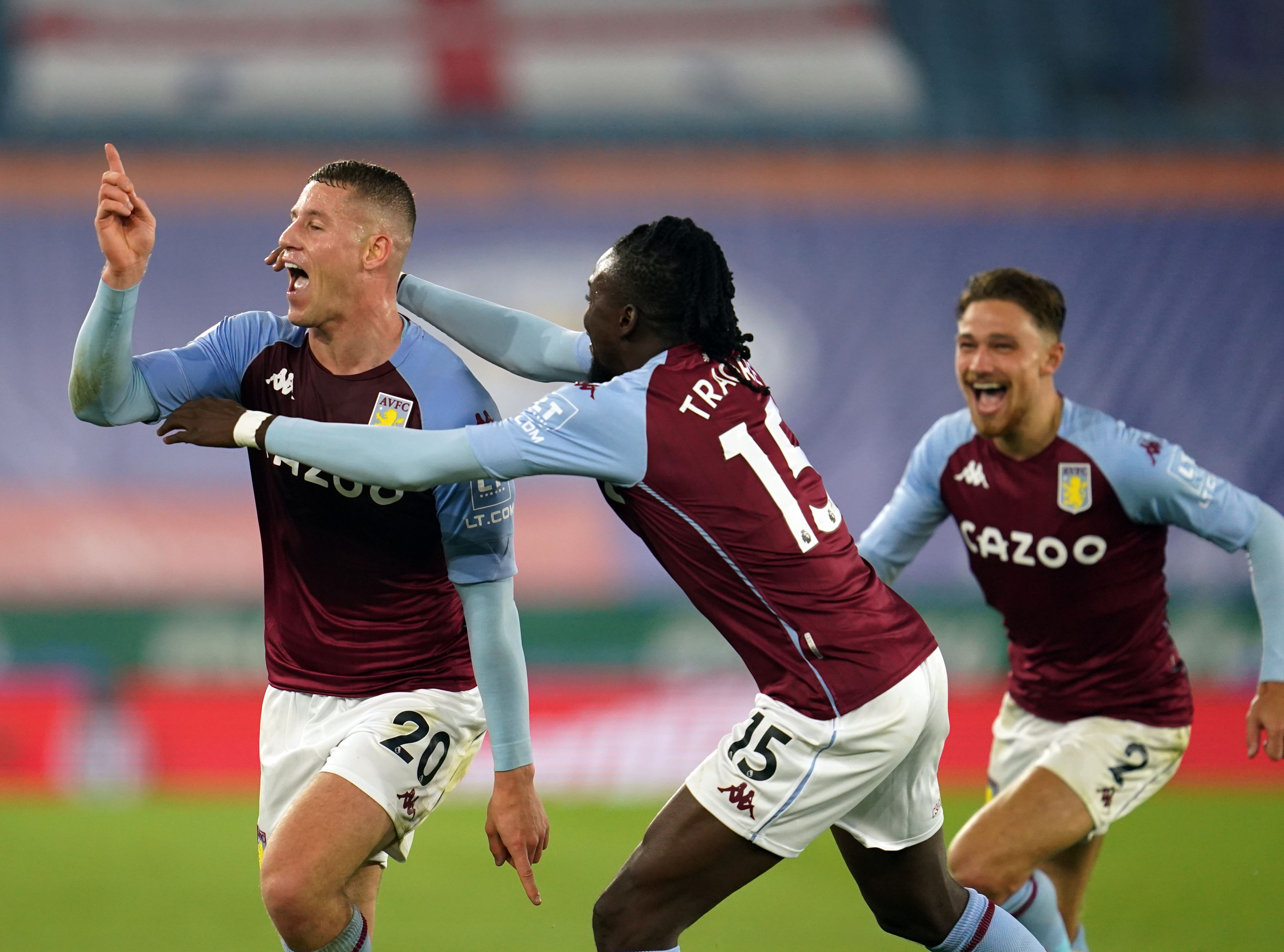 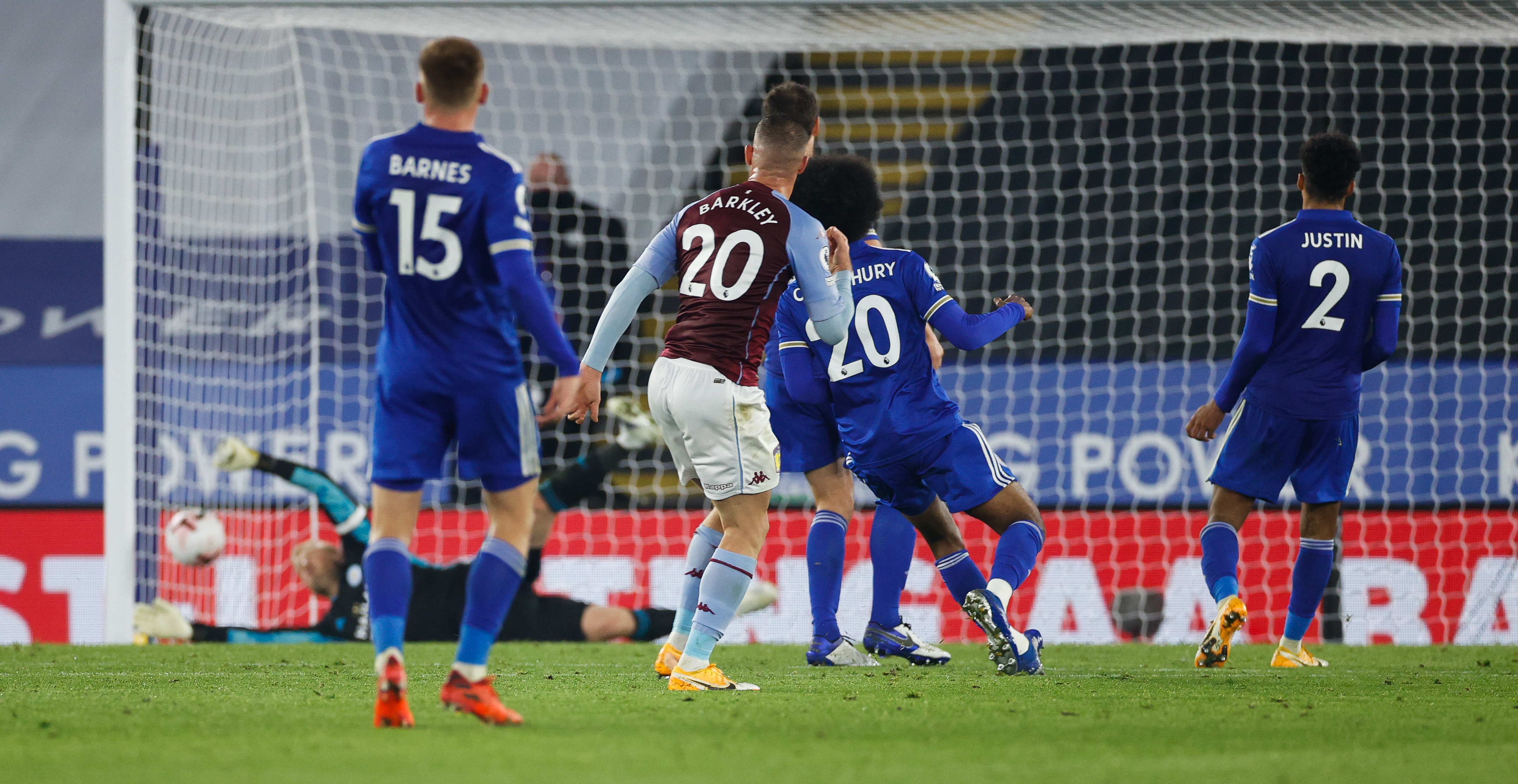 Just when it looked as though we were heading for the Premier League’s first goalless draw of the season, the on-loan Chelsea midfielder had other ideas.

Barkley was brought in by Villa last month to take advantage of the spaces created by opponents doubling up on Jack Grealish.

And that is exactly what he did as he took John McGinn’s sideways pass in his stride before belting an unstoppable shot beyond Kasper Schmeichel from the edge of the area.

It means Villa have won their first four games of the season for the first time since 1930.

And it moves them up to second place in the table, just one point behind early leaders Everton with a game on hand.

It was a spectacular ending to a brutal battle of wills featuring 36 fouls and seven yellow cards.

And no-one suffered more than Grealish, the Villa thriller who became the most fouled player in Premier League history last season and has been even more sinned against this time around. 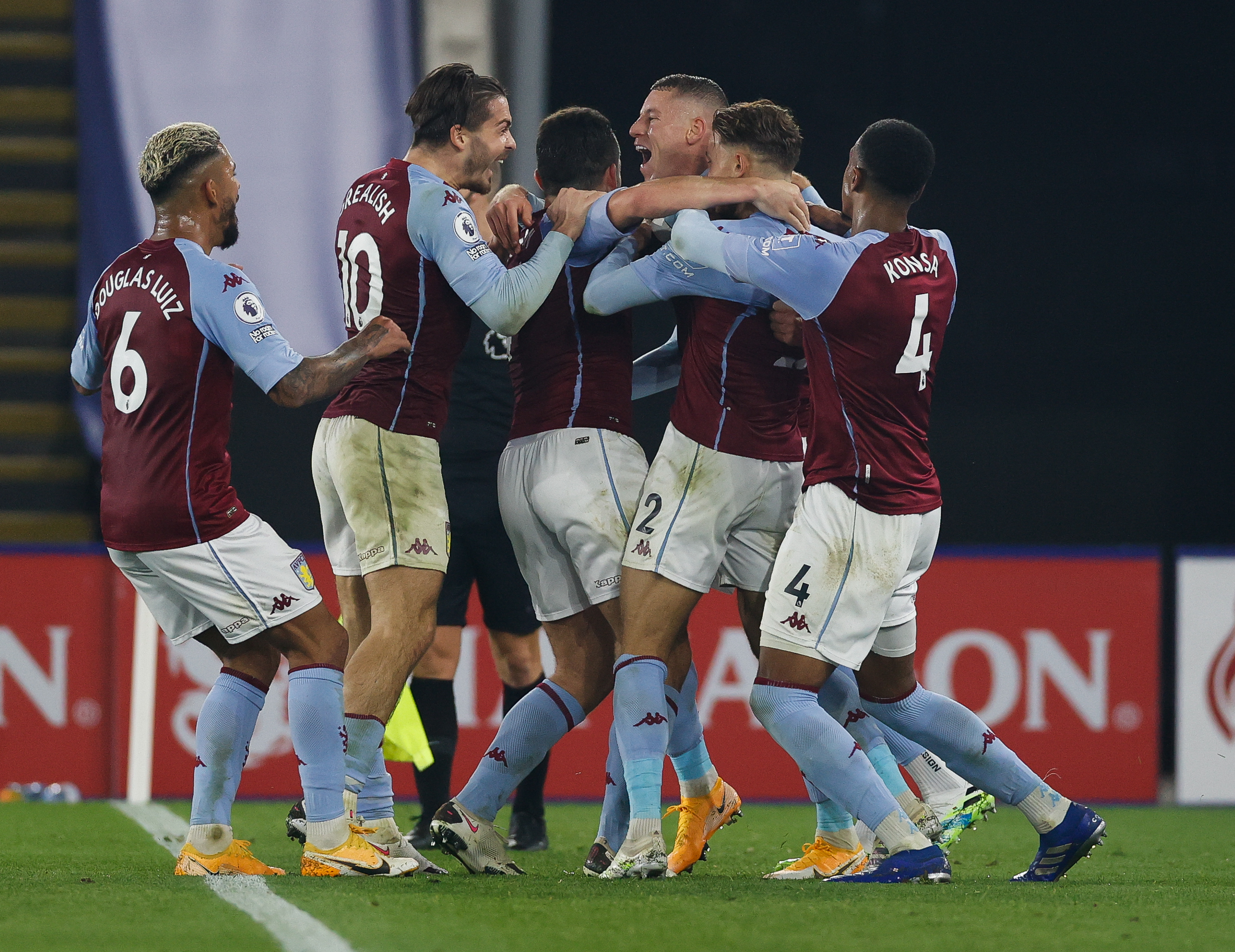 Time and again he was sent crashing to the deck like a drunken sailor in a gale force wind.

Next up was a hack at the ankles from Ayoze Perez before another painful clattering from Timothy Castagne brought him to his knees once more.

Yet in spite of all the bumps and bruises he kept coming back for more to drive his opponents to distraction.

Gareth Southgate might still have his doubts about Grealish’s talents but it’s not a view shared by many others.

In a feisty war of Midlands attrition, he was the one shining star of an otherwise disappointing encounter.

His inch perfect cut-back was driven just wide by Trezeguet and an exquisite backheel to Matt Targett deserved far better than the overhit cross which followed.

Ezri Konsa headed his deep corner just wide at the back post and another charge down the wing was ended by Castagne depositing him into touch. 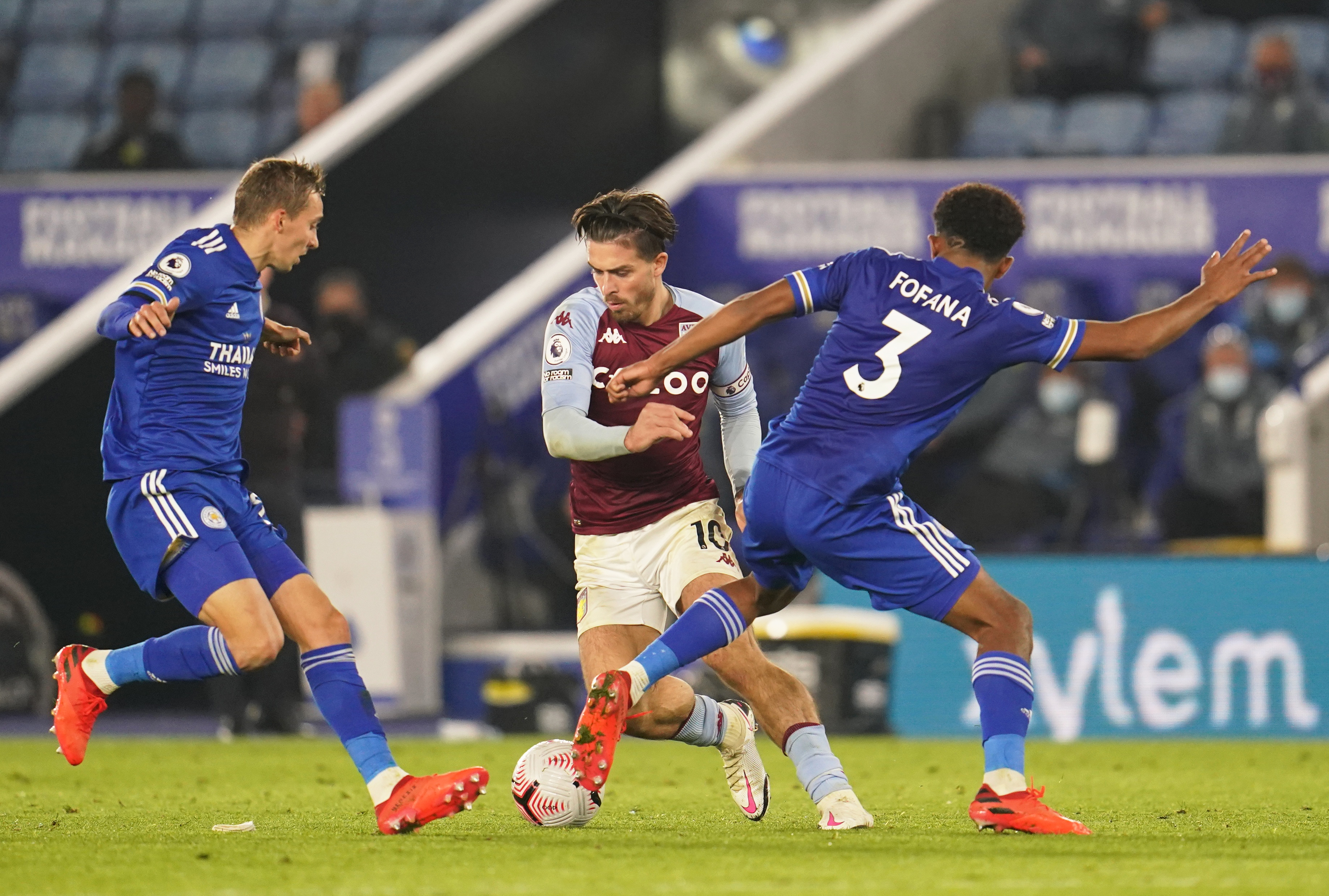 Yet even Grealish’s dancing feet could barely separate two evenly matched teams who both started the match with ambitions of moving into second place in the table.

In this craziest of seasons few teams have proved more unpredictable than Leicester, who scored 12 in their first three League games, including five at Manchester City, then lost 3-0 at home to West Ham.

Brendan Rodgers had been stewing on that one for the past fortnight and couldn’t wait for the end of the international break to make amends.

But the lay-off still wasn’t long enough for Jamie Vardy and Caglar Soyuncu to recover from muscle strains as they joined Ricardo Pereira and Wilfred Ndidi on the sidelines.

Villa had no such problems and unsurprisingly stuck with the team which hammered Champions Liverpool 7-2 in what was arguably the most shocking result of the Premier League era.

But Leicester are no Liverpool and were clearly not in the mood to make it quite so easy for Grealish and his Villa chums.

Ollie Watkins set the tone for this no holds barred battle with an early arm into the chops of Leicester’s £36.5million teenager Wesley Fofana. 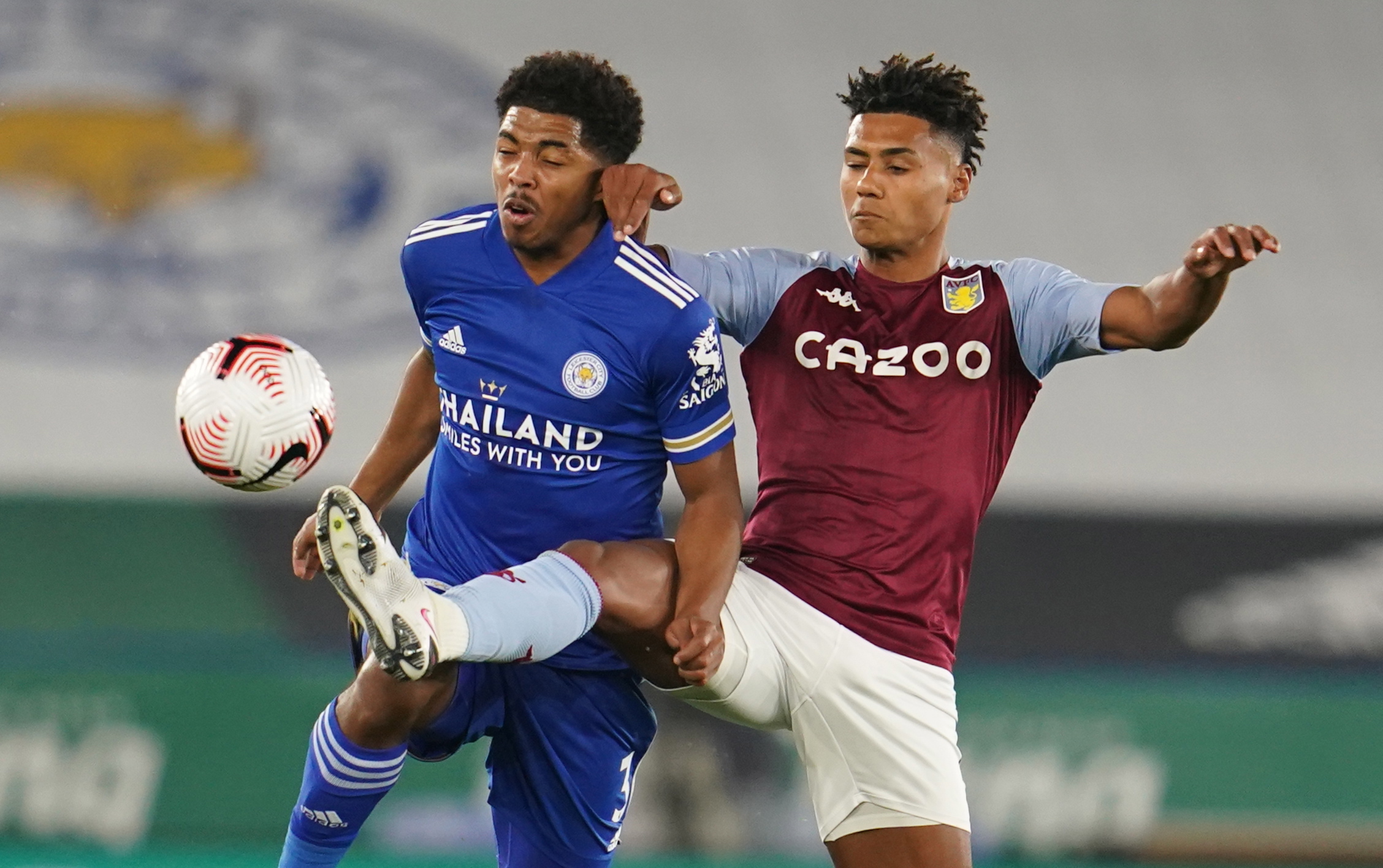 And while Grealish might have been the most sinned against player on the pitch, Villa weren’t exactly angels themselves.

John McGinn and Matty Cash were both booked for hauling down Harvey Barnes, with Cash taking such a firm two-handed grip on his opponents’ shorts that the Leicester man was almost exposed to the cold night air.

And with neither team prepared to take any prisoners, clear-cut chances were inevitably few and far between.

The closest we came to a breakthrough goal was Youri Tielemans’ deflected effort which demanded a smart adjustment of feet by Villa keeper Emiliano Martinez.

Castagne and Kelechi Iheanacho were also denied by Martinez before substitute James Maddison hammered a free-kick just over after he had been pulled down on the edge of the area by Douglas Luiz.

Castagne finally made it into Jon Moss’ book for yet another hack at Grealish and Jonny Evans quickly joined for tripping Watkins as the Villa striker hared in on goal.

Schmeichel was forced into a couple of routine saves by Luiz and Watkins but was never seriously troubled…until Barkley’s last-gasp rocket left Villa fans pinching themselves.