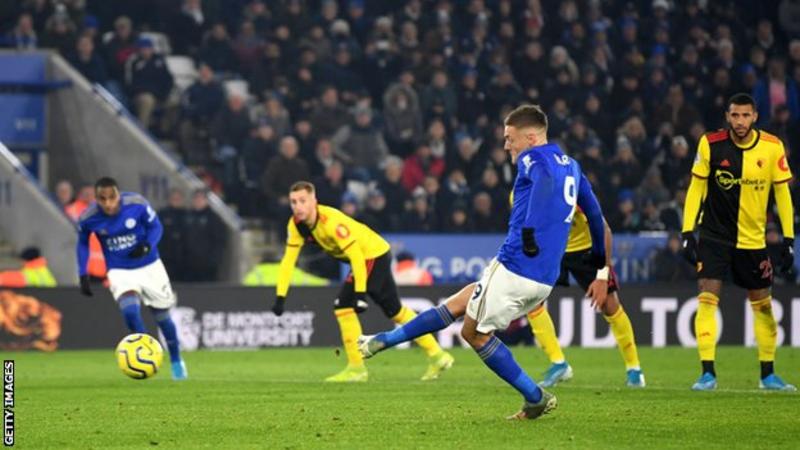 Jamie Vardy and James Maddison scored as Leicester beat bottom-club Watford to climb back to second in the Premier League.

After a goalless first half, Vardy fired the hosts ahead from the penalty spot after Adam Masina had fouled Jonny Evans.

Maddison then made sure of the win in stoppage time, breaking away before slipping the ball past Ben Foster in the Watford goal.

The win moved Leicester back above Manchester City into second place, eight points behind leaders Liverpool who hammered Everton 5-2.

It was also Leicester’s seventh consecutive top-flight win, equalling a club record that was set in March 1963 and surpassing any run they were able to manage in their title-winning season in 2015-16.

Defeat, meanwhile, leaves managerless Watford bottom of the table and they are now seven points adrift of safety after Southampton beat Norwich to move out of the relegation zone.

The Hornets did not manage a shot on target at the King Power Stadium until the 90th minute when Domingos Quina hit a tame effort at Kasper Schmeichel as the visitors slumped to a ninth defeat in 15 games.

Brendan Rodgers’ reign at Leicester got off to a losing start with a 2-1 defeat at Watford back in March, but the two sides have gone in opposite directions since that day.

The Foxes have gone on to collect 52 points from 24 games compared to just 15 for the Hornets over the same period, while this win was Leicester’s 11th from their opening 15 games of the season – the first time they have won so many games at this stage of a league campaign.

This was not Leicester at their fluid, attacking best but even so they could still have won by an even bigger margin.

Harvey Barnes was twice denied by Foster either side of half-time, while Vardy was harshly denied a penalty in the first half when he was adjudged to have dived despite replays suggesting he had been fouled.

Leicester are putting together form they did not even manage in their title-winning campaign and show no signs of slowing down. Talk of a second Premier League title may still be premature but they certainly appear ready to pounce should Liverpool slip up during a busy December.

A change in the dugout but Watford’s woes continue

Watford dispensed with their second manager of the season at the weekend with the departure of Flores, and it was tasked to Under-23s boss Hayden Mullins to inspire the beleaguered Hornets to only a second win of the season.

The former defensive midfielder tried to stamp his mark on the team by switching from a back five to a back four and it certainly led to an improved defensive display from the Hornets as they looked solid in possession and kept a normally free-scoring Leicester at bay for almost an hour.

But Watford’s familiar failings in attack were once again laid bare as they failed to create anything of note in the final third. Gerard Deulofeu was largely anonymous while Troy Deeney showed plenty of endeavour without being able to trouble a disciplined Leicester side.

The Hornets have now failed to score in eight of their 15 league games this season – the worst record in the Premier League – and it highlighted the size of the task facing an incoming manager. 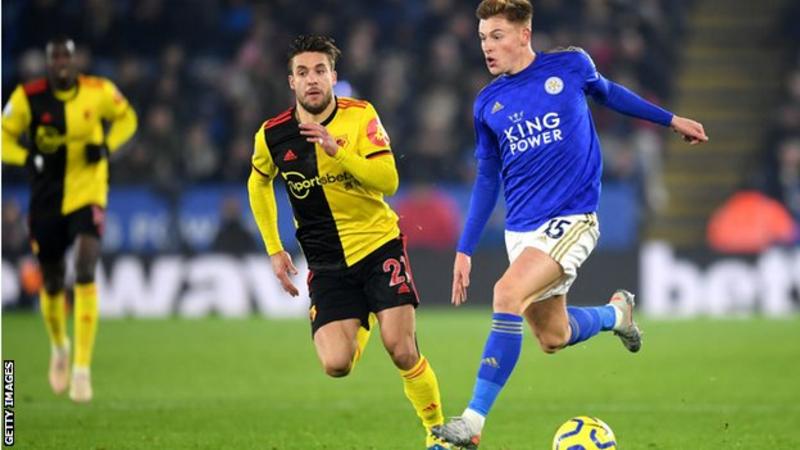 ‘We had to be patient’ – what they said

Leicester boss Brendan Rodgers, speaking to Match of the Day: “It was a tough game for us. Hayden Mullins had Watford very well organised. We had to be patient this evening and worked very hard for that but I thought we deserved it.

“Jamie Vardy is absolutely fantastic. I thought he should have a penalty in the first half. I don’t know why that was overturned. In the current rules that is normally given but it wasn’t and we gathered our composure and continued to work away to get the goal.

“It was a real team effort tonight and to get seven wins on the spin in the Premier League is a great achievement. The team is developing and are proving they have a winning mentality and mindset. We will do our best (to stay in top two), we fight and work and see where it takes us.”

Watford caretaker manager Hayden Mullins: “I think up until the penalty we were in the game and even after it we were still in the game. We have come away from home to a team that has done really, really well and put a performance in.

“What I saw tonight was a side in us that came away from home and showed good levels of fitness, good intelligence on the field, put in a great performance and took it right to the wire. There were loads of positives.

“The boys have responded fantastically well. I’m so proud of what they did tonight.”

Vardy closing in on record run – the stats

Attempt saved. Domingos Quina (Watford) left footed shot from outside the box is saved in the centre of the goal. Assisted by Kiko Femenía.

Etienne Capoue (Watford) wins a free kick in the defensive half.

Adam Masina (Watford) is shown the yellow card for a bad foul.

Attempt missed. Abdoulaye Doucouré (Watford) header from the centre of the box misses to the right. Assisted by Adam Masina with a cross.

Etienne Capoue (Watford) wins a free kick in the defensive half.

Attempt blocked. Dennis Praet (Leicester City) right footed shot from the left side of the box is blocked. Assisted by James Justin.

Wilfred Ndidi (Leicester City) wins a free kick in the defensive half.

Isaac Success (Watford) wins a free kick in the defensive half.

James Maddison (Leicester City) wins a free kick in the defensive half.

James Maddison (Leicester City) wins a free kick in the defensive half.

Wilfred Ndidi (Leicester City) is shown the yellow card for a bad foul.

Attempt saved. Wilfred Ndidi (Leicester City) header from the centre of the box is saved in the top right corner. Assisted by James Maddison with a cross.

Attempt blocked. Jamie Vardy (Leicester City) left footed shot from the left side of the box is blocked. Assisted by Youri Tielemans.