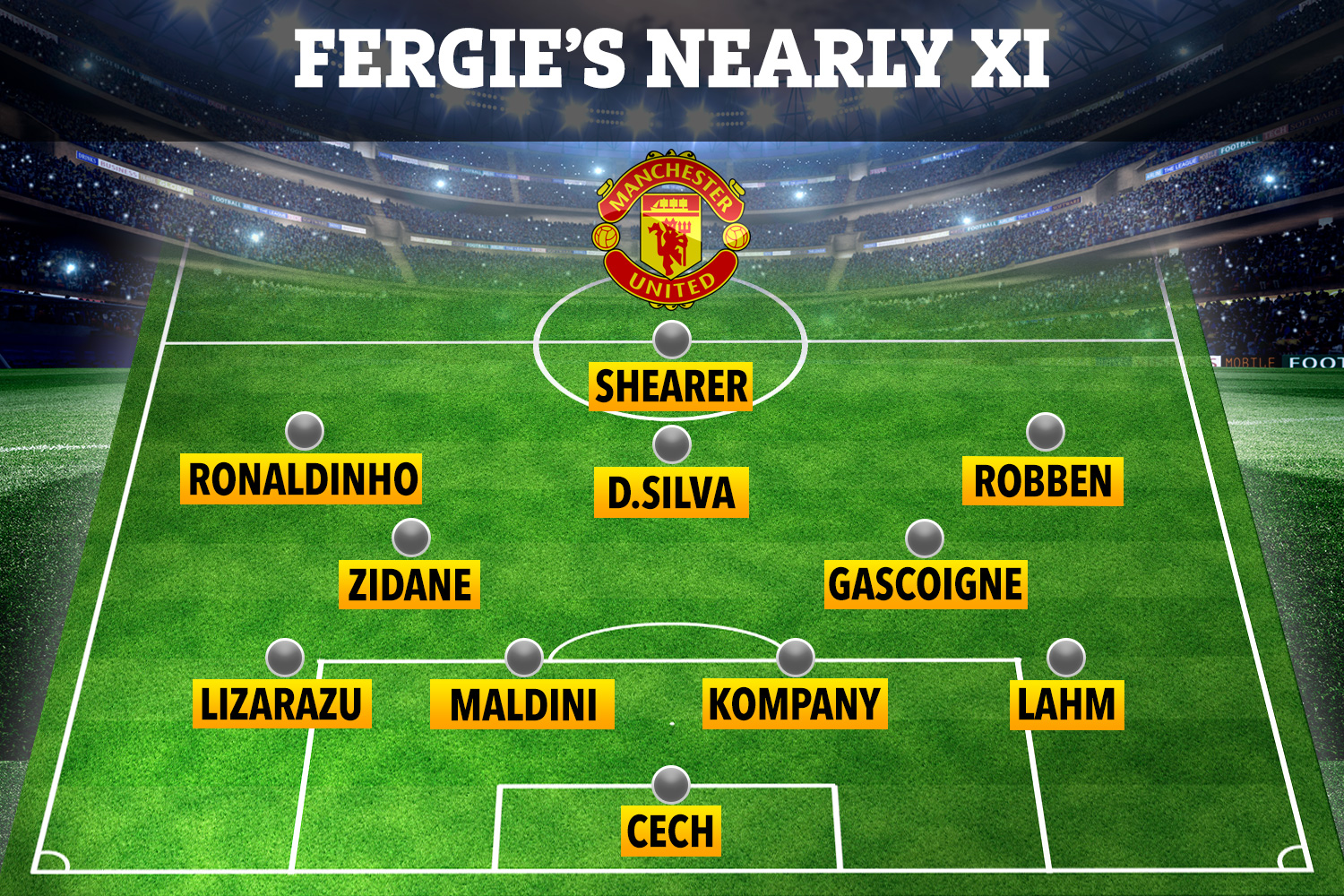 Despite boasting a host of stars, including David Beckham, Paul Scholes and Gary Neville down the years, Fergie often worked wonders with less quality than his rivals.

You only need to look at what happened to the club after his retirement to see just how remarkable a coach he was.

But that's not to say Ferguson didn't try to make big moves in the transfer market.

We've taken a look at the best XI of players Man Utd nearly signed under Fergie, thanks to some help from talkSPORT…

BEFORE he became a Premier League legend with a glittering spell at Chelsea and a late stint at Arsenal, the Czech stopper was a youngster at Ligue 1 side Rennes.

Aged just 19, Cech was starting to make a name for himself, with Ferguson watching him closely.

However, the then-Man Utd boss opted against a move as he believed him to be too young to stand between the sticks at Old Trafford.

Ferguson revealed: “I went to see Petr Cech when he was at Rennes. He was 19 at the time and I said to myself, ‘He’s too young’.”

In 2004, Chelsea made their move and the rest, as they say, is history. 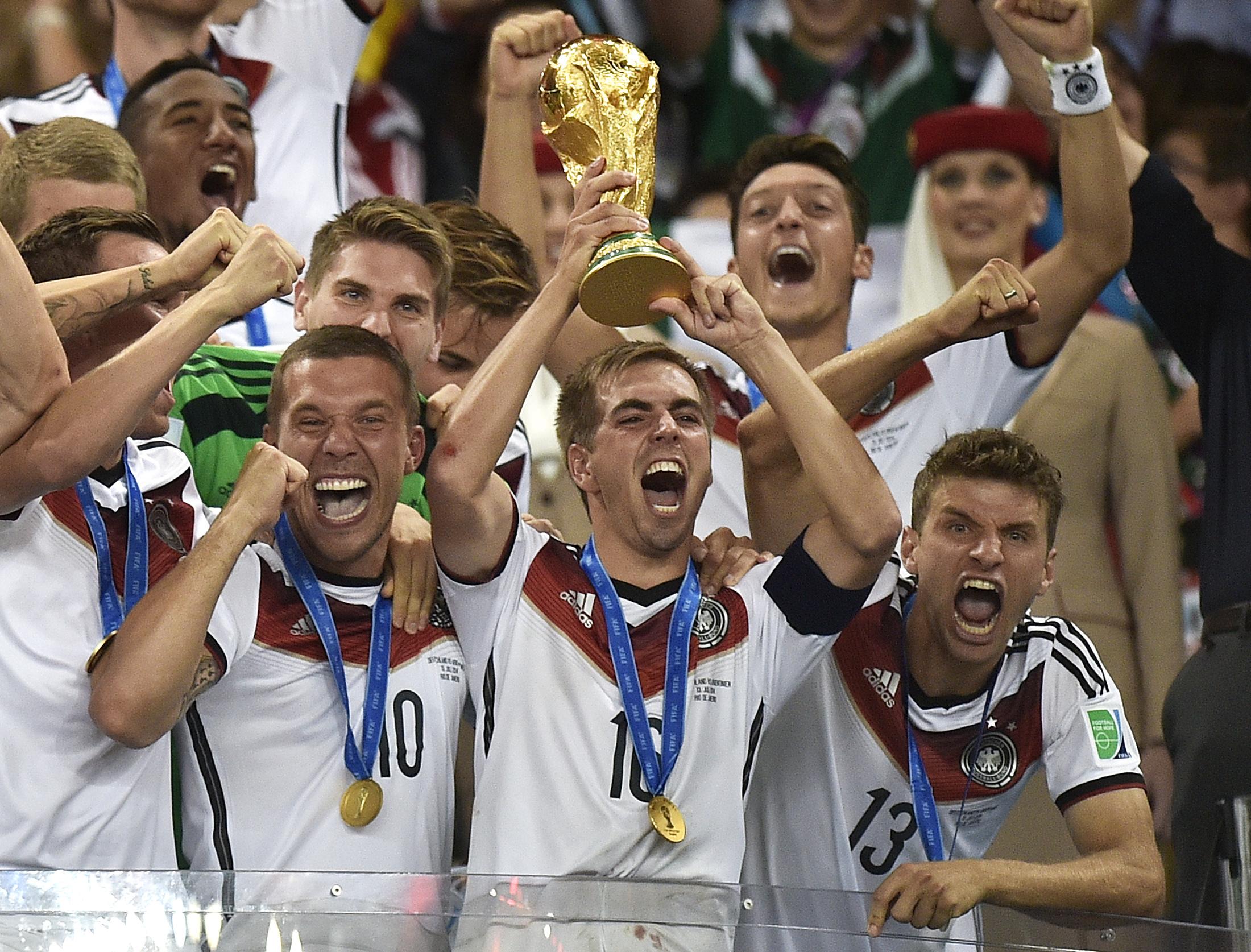 IN the 2003-04 season, Bayern Munich legend Lahm was shipped out on loan to Stuttgart to get some first-team experience – but still at a top level.

Man Utd took on the Bundesliga side in the Champions League that season and Lahm starred in a 2-1 win.

Able to play at right-back, left-back and central midfield, Ferguson was keen to sign him based on that one game, according to Lahm's former Bayern coach Hermann Gerland.

Speaking about loaning Lahm out, Gerland revealed: “It was not easy to arrange. But at Stuttgart, Philipp could play in the Champions League.

"After three months he was the best player on the field against Manchester United.

“Sir Alex Ferguson wanted him in England, I think that says enough.”

THE Belgian star is a real Premier League legend, leading Man City to an unprecedented period of success in their history.

Kompany played a vital role in all four of their league triumphs – including his stunning, out-of-the-blue strike against Leicester to keep Liverpool at bay last season.

But things could have been so different, with then-Anderlecht ace Kompany top of Ferguson's wish list in 2004 – with the defender aged just 18.

The move never came to fruition though and the Belgian ended up at Man City – via Hamburg – in 2008.

Watching him have such success must be a bitter pill to swallow for United fans – especially as it came for their rivals. 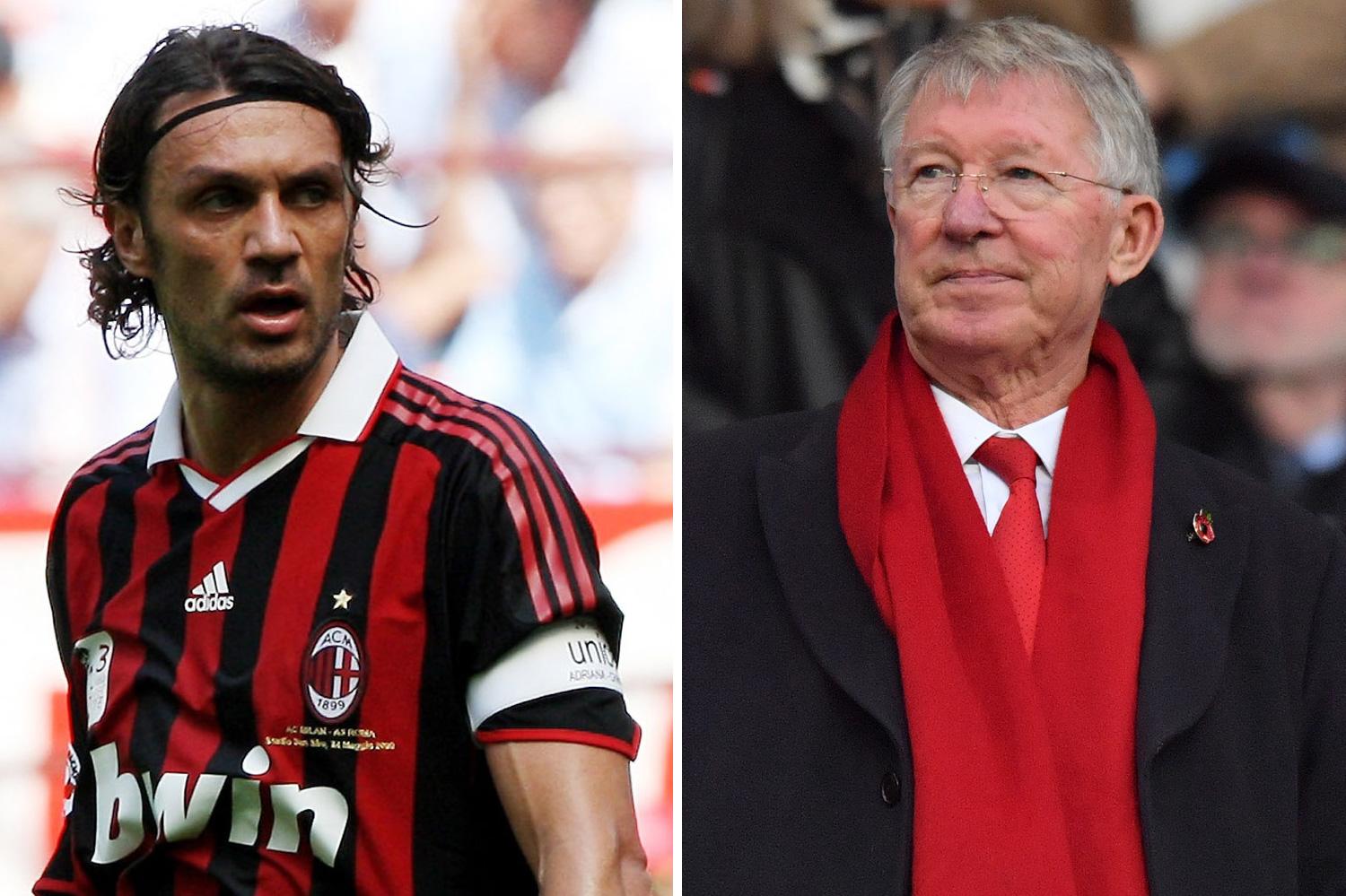 NOW stuck with the likes of Phil Jones and Eric Bailly, Man Utd could have once had arguably the greatest defender of all time on their books.

But in truth, it was never going to happen – thanks to Maldini's dad, Cesare.

Ferguson approached him during an event in Italy and mentioned he was a big fan of his son but was swiftly rebuffed.

Fergie recalled: “Well I did try. But when I met his father he was quite formidable. I got a shake of the head. That’s all I got.

“He did say ‘my grandfather was Milan, my father’s Milan, I’m Milan and my son is Milan. Forget it’.” 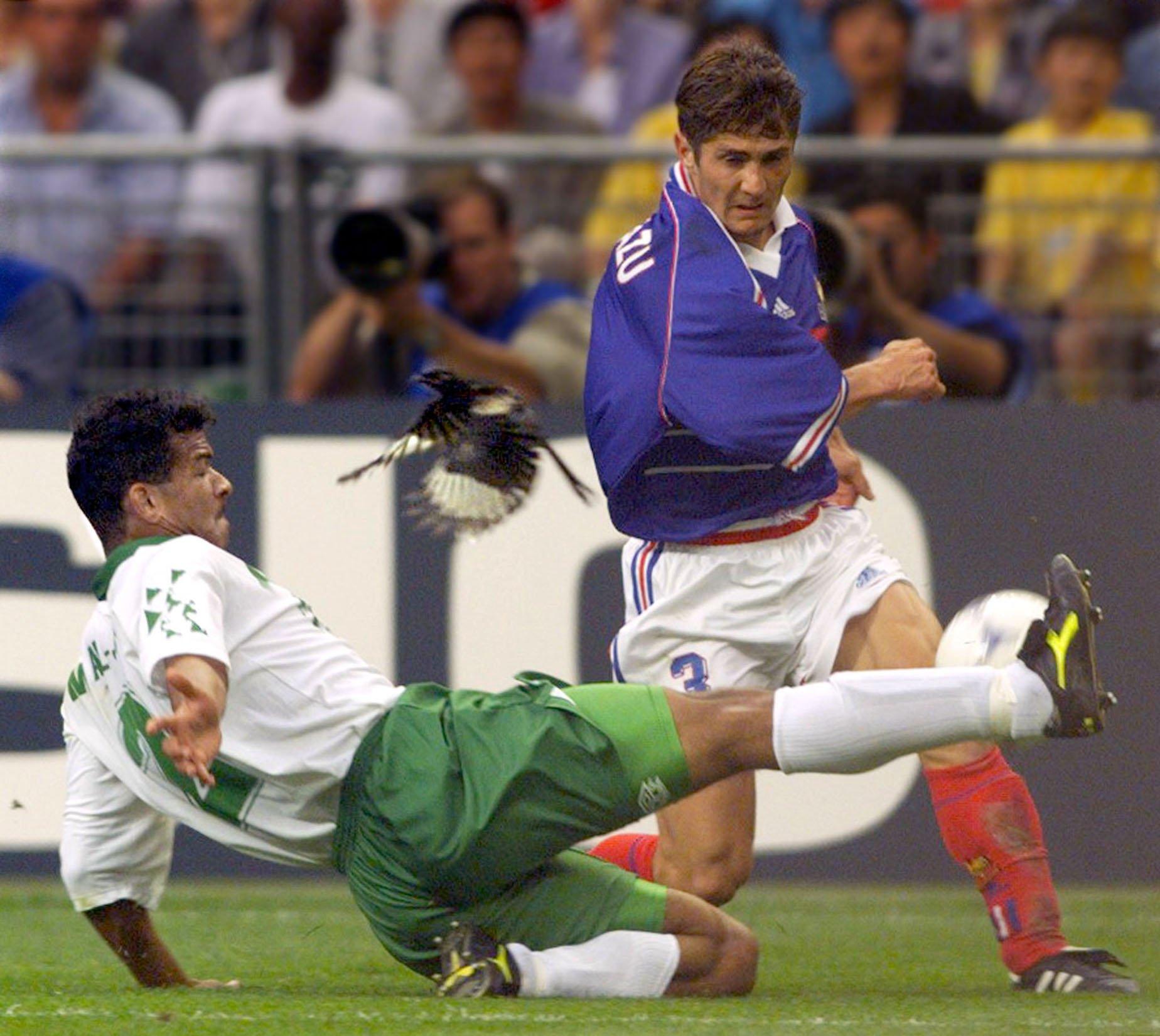 AT the time the best left-back in the world, Lizarazu was once being lined up to replace Denis Irwin at Old Trafford.

But Bayern Munich were adamant their star man wouldn't be going anywhere while at the peak of his powers.

Lizarazu revealed: “I had the chance, I think in about 2001 or 2002, to go to Manchester United, but it stopped very quickly as Bayern said no.

“Ferguson was keen to sign me and United had talks with Bayern, but Bayern said there was no question that I’d be leaving and so I was staying with them.

"I was very happy in Munich, but Manchester United did try.”

JUST a year into his reign at Man Utd, Ferguson was left in awe of one man… Gazza.

But they were made to look like Sunday League players by Gascoigne's artistry, with Fergie saying "he just tore them apart".

Ferguson was later left devastated after Tottenham beat him to the punch – after they bought Gazza's parents a new house to sweeten the deal.

The Scot recalled: "I’m lying by the pool when there is a tannoy for me to take a call.

“It was [chairman] Martin Edwards telling me Tottenham had [signed him instead] by buying Paul’s mum and dad a house in the north east.” 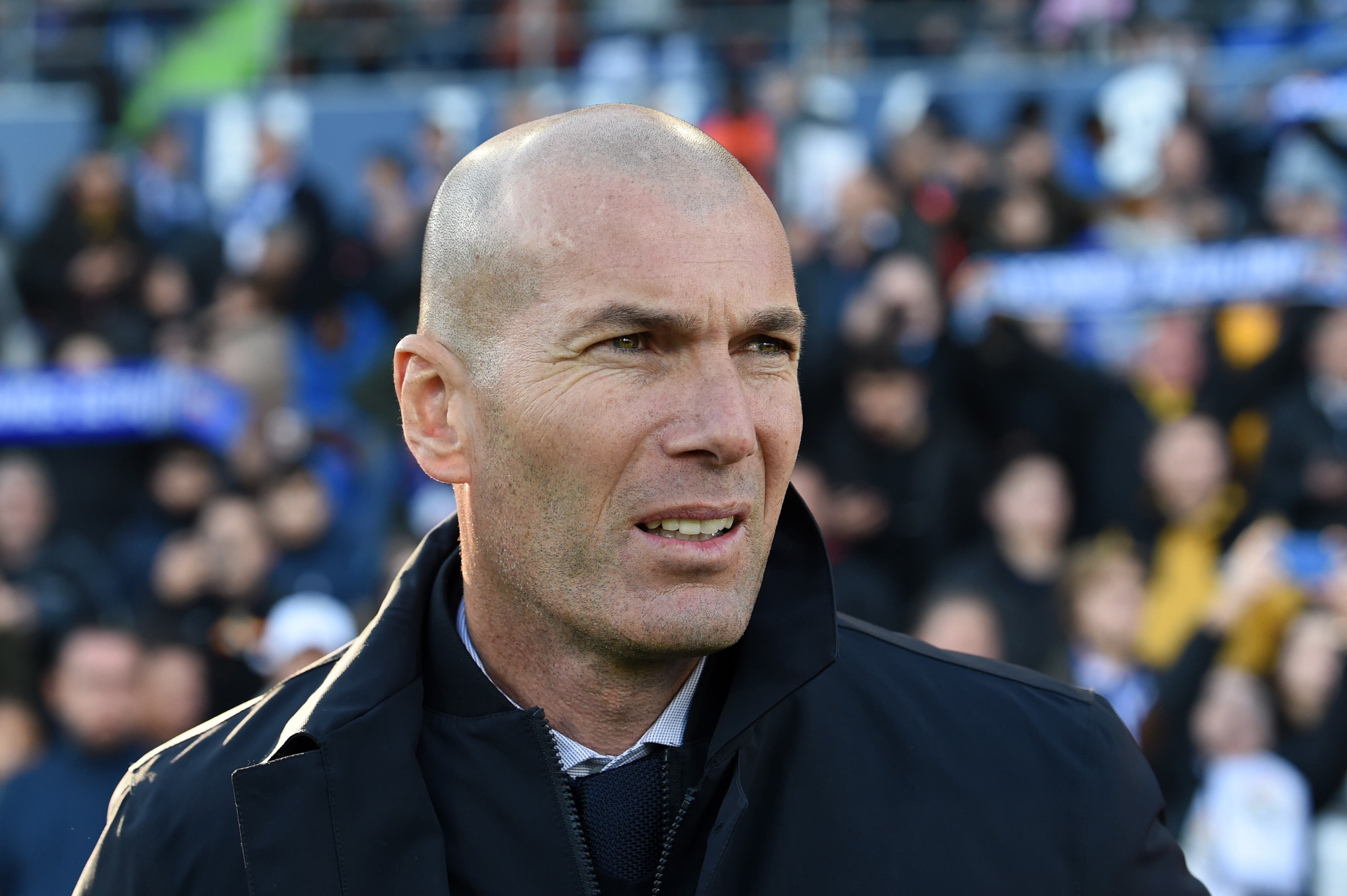 ERIC CANTONA or Zinedine Zidane? That was the big conundrum for Ferguson.

With Cantona already on the books, both the French forward and then-chief scout Les Kershaw recommended Zidane to the Scot boss.

But, feeling they both played the same position, Ferguson opted to stay loyal to his own star.

Former chairman Edwards recalled: “When Zidane was at Bordeaux, Les Kershaw, the chief scout, was telling me we should be interested in him and I mentioned it to Alex.

“Alex said that Eric had also mentioned Zidane to him but Alex felt Zidane played in the same position as Eric.

“Having gone over to France to persuade Eric to re-sign for us, after the Crystal Palace incident [with Cantona banned for eight months for his kung-fu kick], he felt that, if he had brought Zidane in, it may have affected Eric’s position, so he stuck with Eric.” 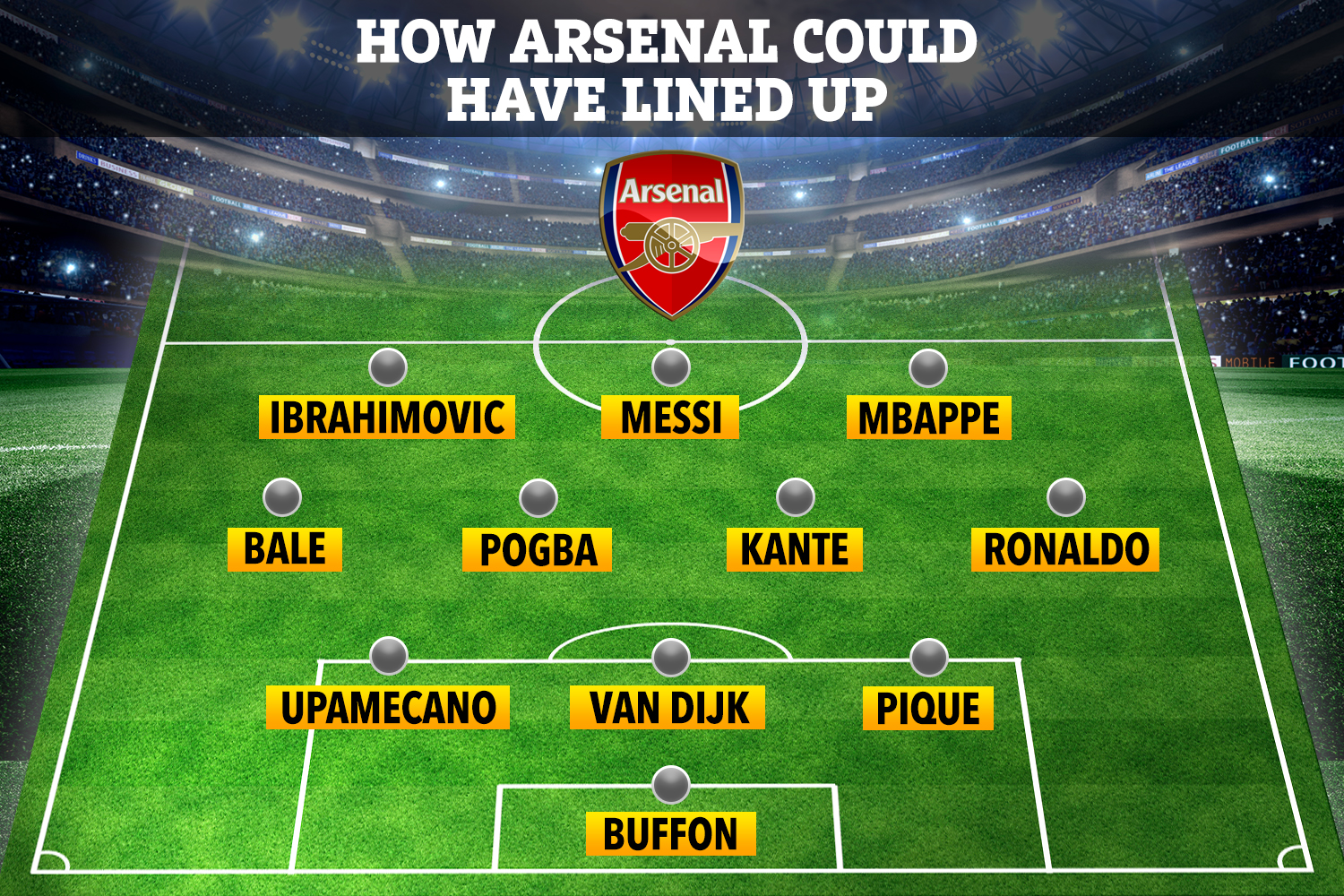 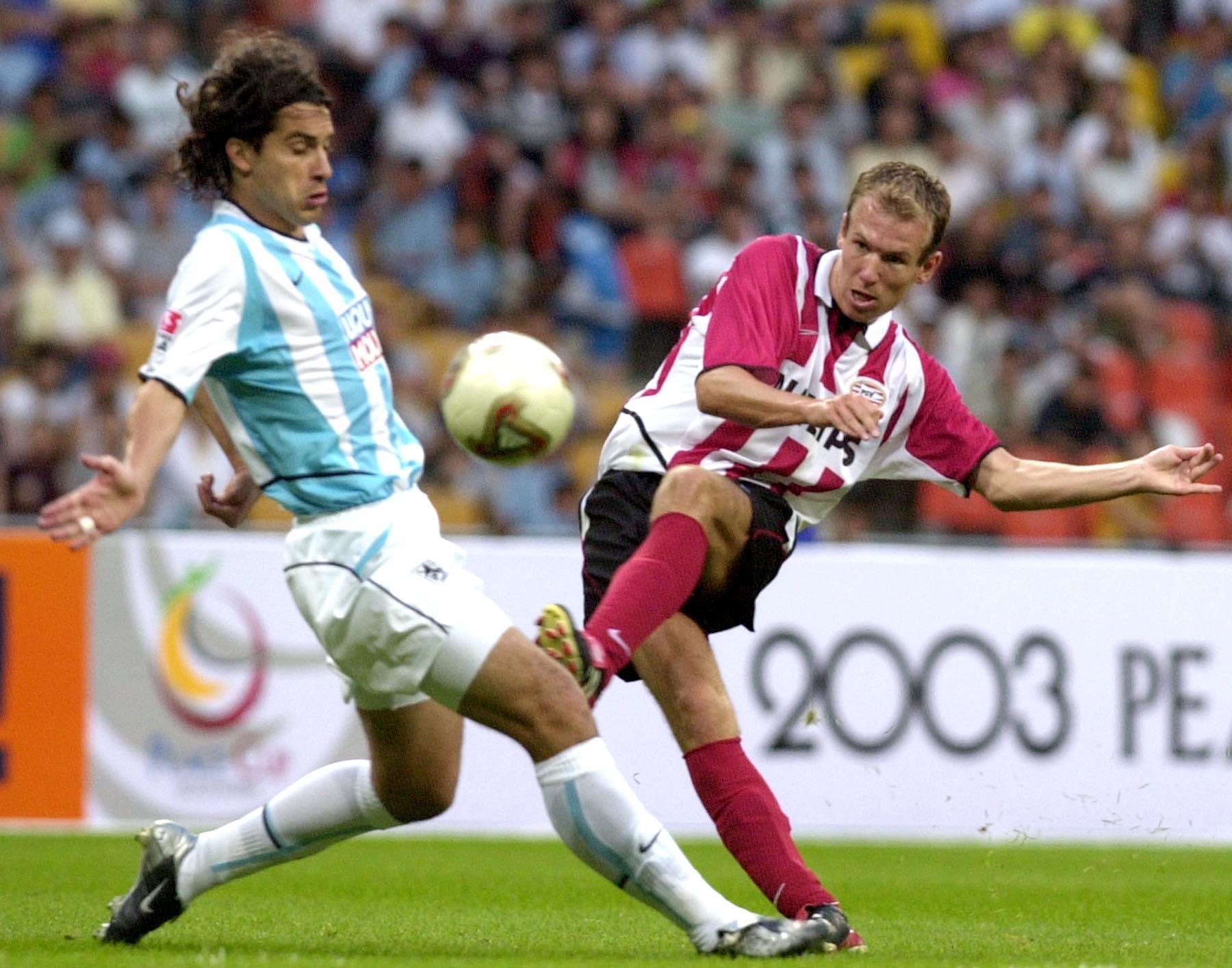 DURING his time at PSV Eindhoven, before he became one of the most-feared wingers on the planet at Chelsea, Real Madrid and Bayern Munich, Robben thought he was destined for a move to Old Trafford.

The Dutch legend insisted he would have moved to United in a heartbeat, but they went cold on him, before the Blues swooped.

Robben recalled: “I had a very good conversation with [Ferguson] over dinner in Manchester and we spoke about football and life.

"I also went and had a good look around the training ground and everything was good.

“But after I went back to PSV nothing happened. There was no real contact and the deal didn’t happen.

"PSV were also negotiating with Chelsea at that time, so maybe they offered PSV more money? I don’t really know.

“I spoke to Chelsea and I liked their plans. We had one meeting and everything was done pretty quickly.

"Had Manchester United offered me a deal straight after I met them, I would have signed there, but it didn’t happen and I’ve got no regrets.”

MAN UTD and Ferguson were keen on the City legend during his time at Valencia.

But Fergie confessed he wasn't a fan of his "attack-only" No10 style, suggesting he wouldn't have known how to fit him into his system.

Ferguson revealed: “We watched Silva a lot when he was at Valencia. And the other player they had, the same type, years before it, played in that No10 role.

“My problem with that was you have to be very, very good to play in that position, because there’s no defensive duties for them.

“So if you’re wanting to be really successful, everyone has to do their turn, has to work, you know?

“So I had a difficulty with that. But, in the end, of course, there’s the greats.

"You could say Lionel Messi was a No10 type, [Diego] Maradona, some fantastic players, and I don’t dispute that.

“But at United we always found it difficult. The kind of No10 I used came from my experience as a footballer.” 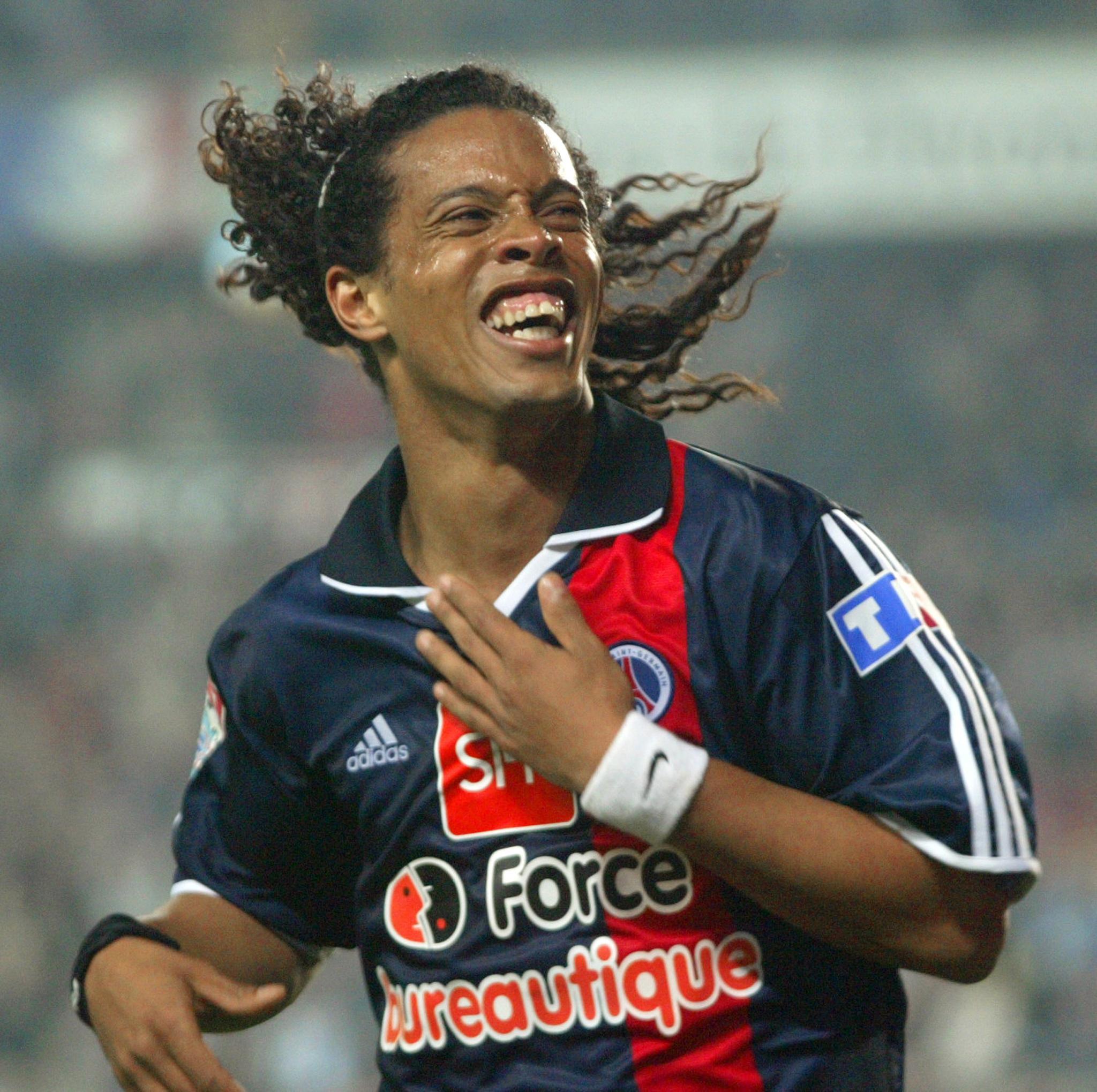 A YEAR on from his 2002 World Cup heroics, still aged just 23, Ronaldinho could have been a United player.

Then at Paris Saint-Germain, the Brazilian was being lined up to replace David Beckham on the wing after he was sold to Real Madrid.

Fergie claimed: "There was a problem with his brother, who was his agent.

"But Peter Kenyon, who was chief executive then, didn’t get the job done." 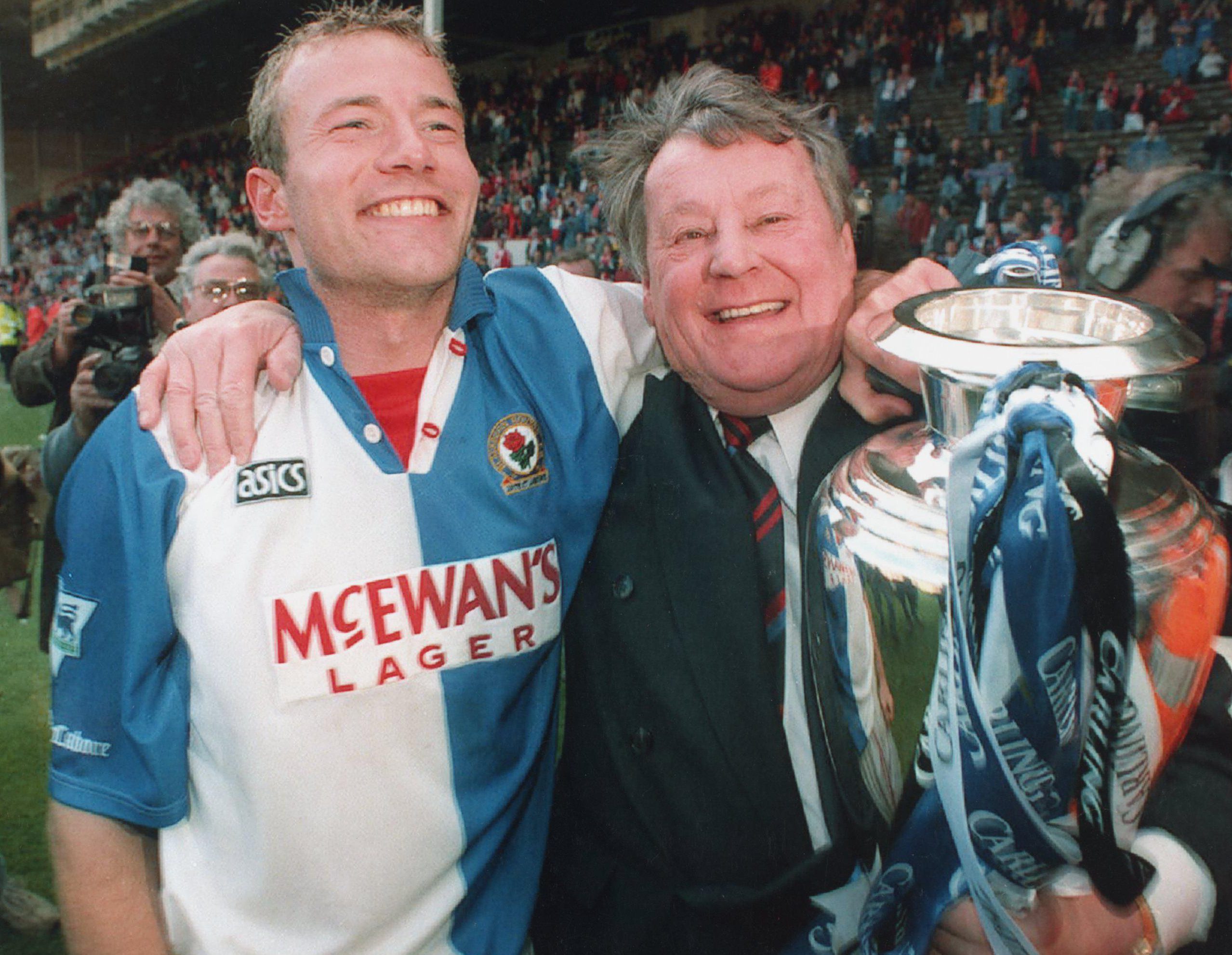 The only problem was then-Blackburn owner Jack Walker, according to ex-United chief Edwards.

In his autobiography, he wrote: “Shearer had been to Alex Ferguson’s house, spoke to him and assured him he wanted to come.

“The problem, I think, was with the chairman of Blackburn, Jack Walker, who was not a great fan of Manchester United, [we were] local rivals, both Lancashire clubs.