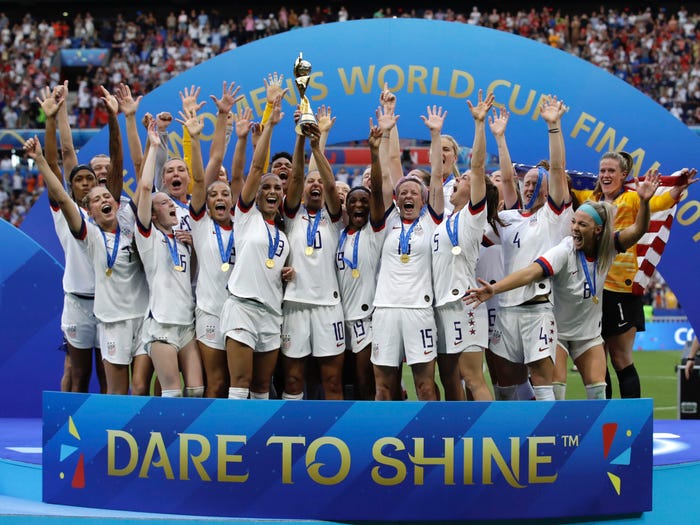 The US Women's National Team will play its first game in 261 days at the end of the month, but many of the team's biggest stars from past tournaments won't be suiting up for the red, white, and blue.

On Tuesday, US Soccer released head coach Vlatko Andonovski's roster for the team's upcoming match against the Netherlands; USWNT legends Carli Lloyd and Megan Rapinoe were not invited to make the trip to Breda, Netherlands, for the November 27 match.

During a call with members of the media later on Tuesday, Andonovski explained his decision to leave Lloyd and Rapinoe — who have a combined 462 caps for the national team — off of his most recent roster.

"With Carli Lloyd, she had a little injury and a little surgery that she's also recovering," Andonovski said. "Right now, she's not physically ready for the game."

"Rapinoe — she's in a situation where she hasn't been able to train, obviously," he added. "We know she didn't do the [NWSL] Challenge Cup or Fall Series, and she was not able to train in a team environment. So, from a physical perspective, with the short camp that we have, we would not be able to help her get up to speed."

With both Lloyd and Rapinoe approaching the tail ends of their careers at 38 and 35 years old, respectively, some fans and reporters alike postulated that the two team captains could have already seen their final days suiting up for the national team. Rapinoe, in particular, has involved herself in many off-field ventures since she went toe to toe with President Donald Trump during the World Cup, leaving some to believe that the pink-haired striker has moved on to other interests beyond the pitch.

But after conversations with both Lloyd and Rapinoe, Andonovski walked away with an impression that the stars remain committed to playing for the national team in the foreseeable future.

"Going back to Carli and Pinoe — I'm excited about where they're at," Andonovski said. "After talking to both of them — I had a conversation with Carli, and I had a great conversation with Pinoe, as well — I don't think that either one of them … have moved on. They're excited and looking forward to January camp."

"And not just January camp — they're looking forward for the challenge in front of them and the Olympics," he added.

In addition to Lloyd and Rapinoe, seven other players from the USWNT's 2019 World Cup squad were omitted from the training camp roster making the trip overseas. Mallory Pugh — the 22-year-old forward long seen as the team's future — is still recovering from an injury and thus will not be ready to play for the match. Even though Pugh already has 63 caps with the USWNT, her future with the team has been in question since she missed the cut for Olympic qualifiers in January.

But just because players have been left off this roster doesn't mean they aren't still in contention for a spot at the USWNT's January camp — or the Olympics. That sentiment stands for players from all positions on the field.

"The process of selecting the team never stops," Andonovski said. "We keep analyzing the players constantly, and this is just another step in it… It's a process that never stops, and I'm sure as we get closer to the Olympics, the roster will narrow down."

"We're gonna keep evaluating, keep analyzing, and — in some ways — keep everyone on their toes, so they're motivated to perform and be the best version of themselves," he added.

The USWNT will head to Tokyo for next summer's games with hopes of capitalizing on the momentum from their 2019 World Cup victory to win their first Olympic gold medal since 2012. But who will be involved in that effort is still anyone's guess.