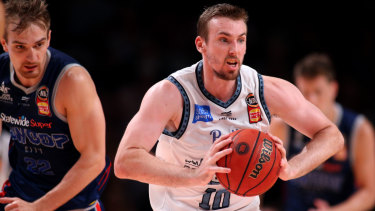 Melbourne’s Mitch McCarron in action against the Adelaide 36ers.Credit:AAP

Melbourne United believe they can manage star guard Mitch McCarron through the rest of the season despite an ongoing knee issue.

The Australian Boomers guard was among Melbourne’s best in Monday’s 114-91 win over Adelaide 36ers but his knee was strapped up and his training time closely controlled on Wednesday as the team prepares for two games against New Zealand Breakers this weekend starting with a visit to Auckland on Friday night.

Melbourne coach Dean Vickerman said McCarron was battling a knee issue which saw his knee swell up after games or when overworked.

Team medical staff believe they can restrict McCarron’s training and allow him to keep playing but Vickerman didn’t rule out resting McCarron from games in the run up to the finals.

Melbourne has six games left, two per week over the final three rounds, and that schedule could prove a trying one for McCarron.

"There is a little bit of damage on that knee but we think we can manage him through the season and improve it," Vickerman said.

"He is going to better for this game than he was for last game. So as long as we can give him rest and continue to improve it we think he will be fine for the rest of the season."

McCarron has had a heavy workload over the past year playing major minutes in the NBL and also suiting up for the NBL-based Australian Boomers for FIBA World Cup qualifiers.

Aside from being a key cog in Melbourne's title hopes, McCarron will also be pushing for place on the Boomers roster for the FIBA World Cup late this year so will need to find a way to let his knee return to full health.

"The knee swelled up a bit after the game [Monday] and we just wanted to make sure it came down quickly as that’s going to be one of the indicators of the irritation is swelling so we will keep managing that," Vickerman said.

"It has been scanned and we are all systems go to have him managed for the rest of the season."

Two wins this round should lock in Melbourne's place in the finals as 16 wins appears to be the magic number for making the top four but the Breakers have to win all their remaining games to have any chance at the finals.

Many NBL observers called Melbourne the clear title favourites after their win in Adelaide but Vickerman knows a desperate New Zealand will push his side to the limit this weekend.

"We haven’t even qualified for the playoffs yet," Vickerman said.

"The Breakers are as good an offensive team as anyone in the league and they are desperate. Every game is a grand final for them.

"We know what kind of environment we are walking into, we know they will give us absolutely everything."