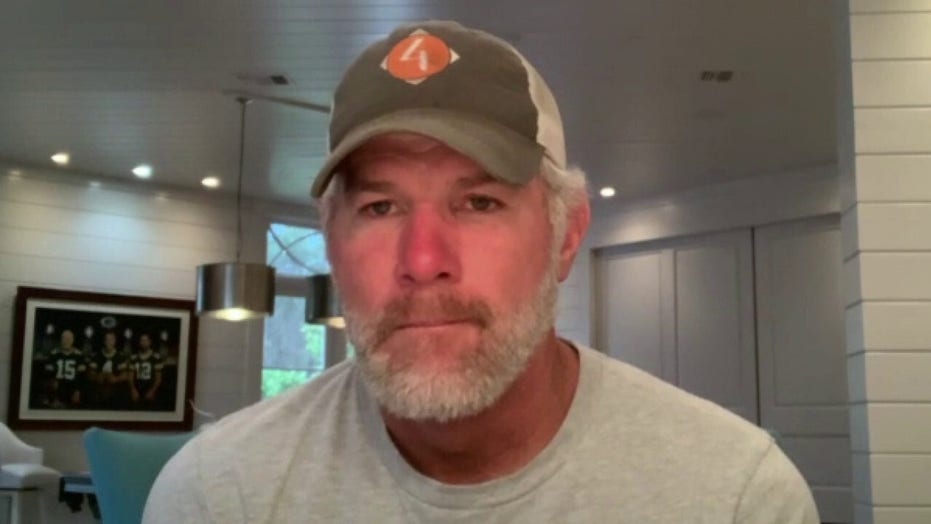 The NFL is making major coronavirus protocol changes, including team facilities shutting down for two days after games; NFL Hall of Fame quarterback Brett Favre weighs in on ‘Fox and Friends Weekend.’

There are four weeks left in the 2020 NFL regular season, and that means there are tons of playoff scenarios that need to be discussed before teams take the field.

There are two teams who are already in the playoffs: Kansas City Chiefs and New Orleans Saints. Both teams could clinch division titles this week.

The Chiefs take on the Miami Dolphins on Sunday and clinch the AFC West division title with a win or a tie. They can also clinch if the Las Vegas Raiders lose to the Indianapolis Colts. The Saints take on the Philadelphia Eagles and can clinch with a win, a Tampa Bay Buccaneers loss or if they and the Bucs tie in their respective matchups.

NFL WEEK 14 POWER RANKINGS: THIS TEAM RECLAIMS THE NO. 1 SPOT

There’s a full slate of NFL games this week so prepare for a lot of football.

Here’s a brief look at what’s going down in Week 14. 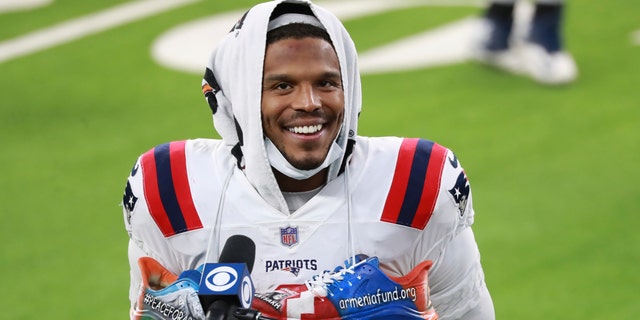 The Rams and the Patriots are in the conversation to make the playoffs. Los Angeles is in a better spot than New England. Even though it’s only Week 14, a win for either team would help make a better case for the playoffs. 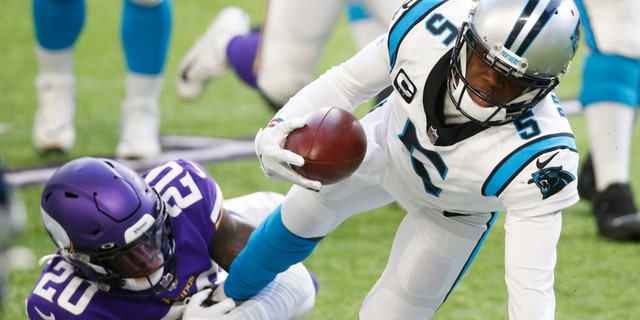 Both teams would like to salvage their seasons with wins. The Broncos are coming off a loss last week while the Panthers had a bye. Neither team is in contention for the playoffs right now.

WHERE: Bank of America Stadium 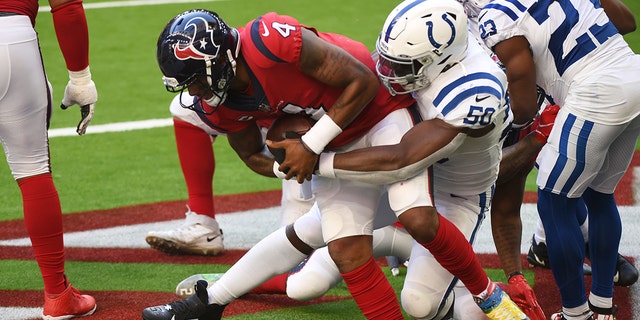 It’s only the fifth matchup between the two teams in their histories. One of the oldest NFL franchises goes up against one of the youngest NFL franchises. The Bears hope to stay in the playoff conversation with a victory, while the Texans are trying to take some solace from a losing season with gritty play. 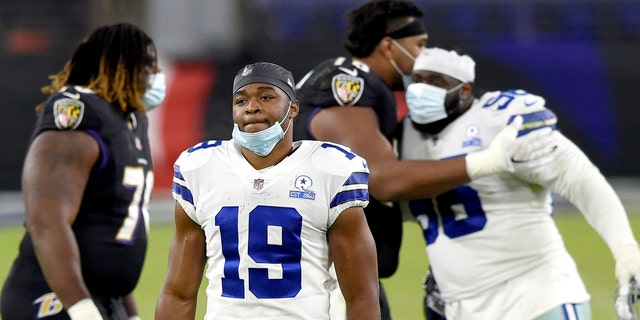 In a battle of backup quarterbacks, Sunday’s game between the Cowboys and Bengals is less thrilling than it was thought to be over the summer. Somehow, the Cowboys are only two games back of the division-leading Giants for a playoff spot. 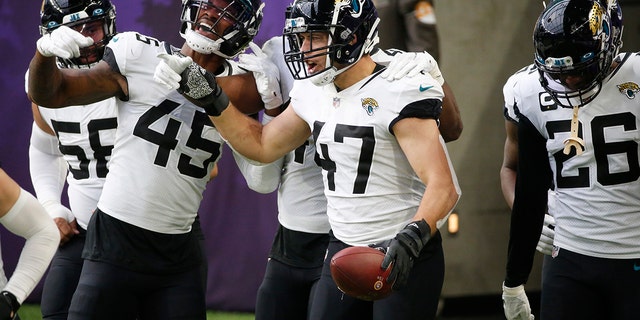 Jacksonville Jaguars linebacker Joe Schobert (47) celebrates with teammates after returning an interception 43-yards for a touchdown during the second half of an NFL football game against the Minnesota Vikings, Sunday, Dec. 6, 2020, in Minneapolis. (AP Photo/Bruce Kluckhohn)

Here’s how the Titans bounce back. Tennessee gets to play one of the worst teams in the NFL: the Jaguars. Jacksonville gave the Vikings a run for their money but ultimately failed in the end. The Titans have playoffs on their mind while the Jags are hoping for a top draft pick. 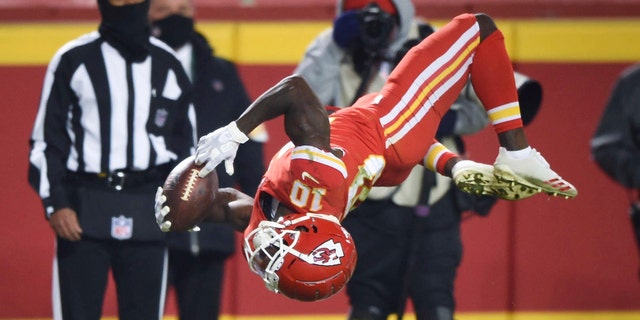 Kansas City Chiefs wide receiver Tyreek Hill (10) does a back flip in the second half of an NFL game against the Denver Broncos on Sunday, Dec. 6, 2020, at Arrowhead Stadium in Kansas City.  (Tammy Ljungblad/The Kansas City Star via AP)

The Dolphins couldn’t have found a worse time to play the NFL’s best team: the Chiefs. Miami is still a game behind in the AFC East, while Kansas City is hoping a win can give them the AFC West title. 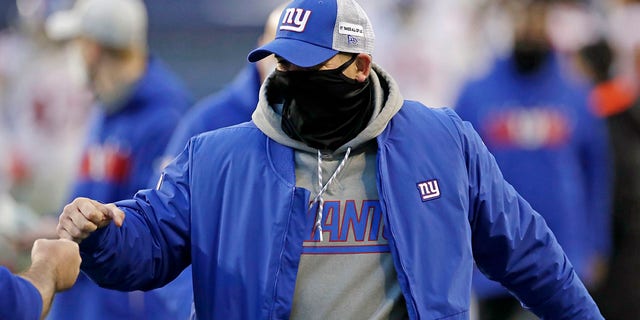 Coming off an upset against the Seahawks, the Giants are going to need another miracle against the Cardinals. A win moves the team closer to .500 and a loss could put them out of the lead in the NFC East. Arizona needs a win to stay in contention for a playoff spot. It’s a big game for both teams. 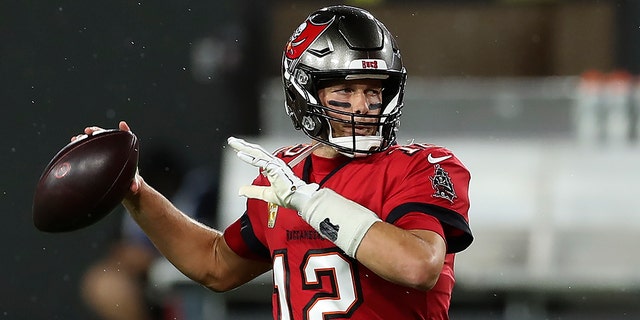 Tom Brady and the Buccaneers have gone through all kinds of rough patches this season but a late bye week might be just what they needed. It’s a big game as Tampa Bay plays the Vikings. Both teams can smell playoffs but are far from clinching anything. 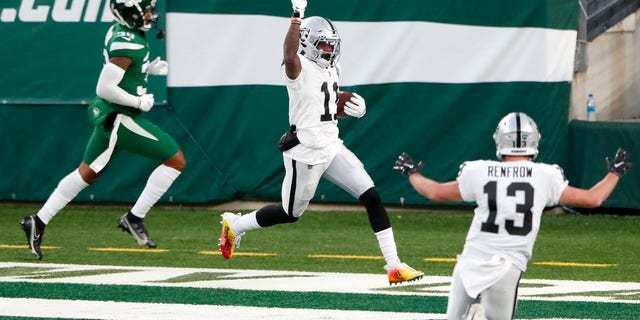 The Raiders pulled off a miracle at MetLife against the Jets last week and now have to hope for the same against the Colts. It’s only the 17th meeting between the two teams. Indianapolis needs a win to keep up in the AFC South. The Raiders also need to win to maintain their playoff hopes. 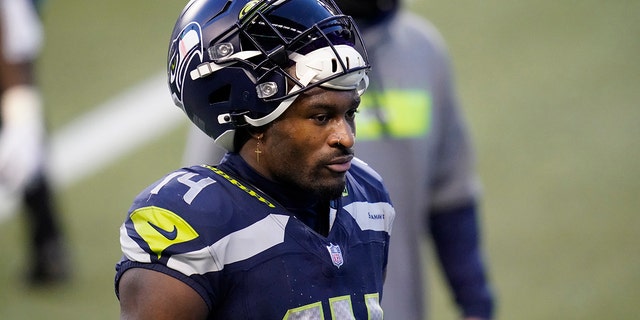 The Seahawks let one go against the Giants last week and on Sunday they welcome the Jets to Lumen Field. The Jets lost a close one to the Raiders last week and are in a good position to get the No. 1 pick in the 2021 NFL Draft. Will Seattle take out their frustrations on this Jets team? 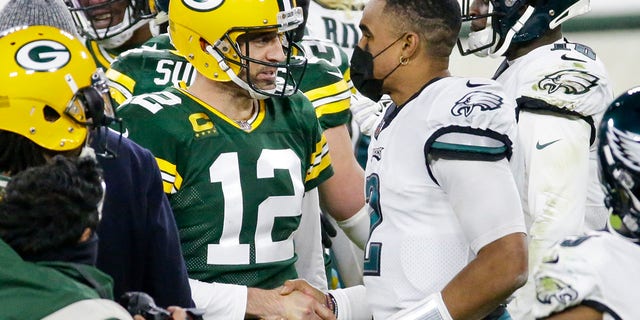 The Packers are closing in on 10 wins and could clinch a playoff spot with a defeat of the Lions. Detroit will hope to play spoiler and keep their own slim playoff hopes alive with a victory. 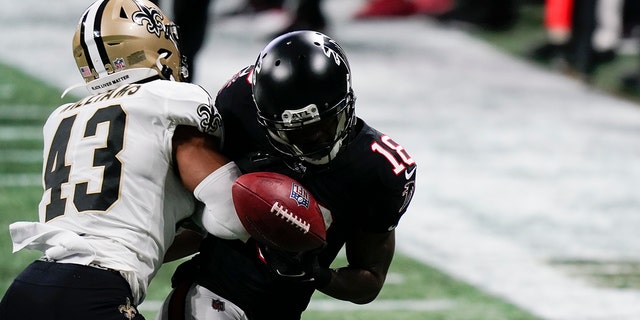 The Falcons and Chargers are playing for draft position at this point. Justin Herbert has been good for Los Angeles but has had trouble closing out games. The Falcons have just had a difficult season.

Jalen Hurts will get a chance to turn the Eagles’ hopes around in place of Carson Wentz. Philadelphia needs a win to keep pace in the NFC East playoff race. The Saints are hoping a win gives them the NFC South crown.

Washington upset the Steelers last week and now have the 49ers to deal with. Washington have to hit the road to play at State Farm Stadium. The 49ers are playing in the Cardinals’ home field because of Santa Clara County, Calif.’s COVID-19 restrictions.

The NFL has two big matchups to end the week. The Bills and the Steelers are in the Sunday night game. Buffalo is looking for a second straight 10-win season. The team hasn’t had back-to-back double-digit win seasons since 1998 and 1999. Pittsburgh doesn’t have to worry about being undefeated and can play without the elephant in the room.

The Browns have nine wins for the first time since 2007. It’s been a dream season and could get their 10th win against the Ravens. It’s a key AFC North matchup that may affect playoff standing later in the season.