Australian ticketholders are among millions yet to hear if they can get a refund after the Olympic Games were postponed until next year.

About five million of the 7.8 million tickets had been sold for the Tokyo Games, when they were set for July-August this year. 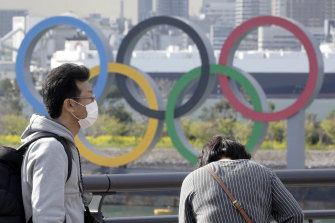 Tickets bought for Tokyo 2020 will be honoured next year but there is no word yet on refunds.Credit:Bloomberg

But the COVID-19 pandemic this week forced organisers to postpone the Games until a yet-to-be-decided date in 2021, leaving ticketing vendors scrambling.

CoSport is the authorised vendor for eight countries, including Australia and the US, and has indicated that any tickets purchased will be honoured at the 2021 Games.

But they are yet to confirm if refunds will also be offered.

"We know there are questions surrounding such an unprecedented move and want you to know that CoSport Tokyo 2020 purchases will be honoured at the Games in 2021, and we continue to work in support of our customers in addressing issues," a CoSport email to customers said.

Local demand for tickets was strong, although the Australian Olympic Committee was unsure exactly how many Australians had managed to purchase tickets.

The AOC was remaining in contact with CoSport to provide clarity on their options.

In the most recent Games budget from December 2019, organisers said more than $A1.3 billion had been raised through ticket sales.

With the exception of the two world wars, the Olympics had never previously been cancelled or postponed since they began in their modern iteration in 1896.