After Ray Salnave graduated from Monmouth University in the spring, he enrolled at DePaul as a graduate transfer with visions of stepping up from the Metro Atlantic Athletic Conference to the Big East. He averaged 14.5 points, 4.5 rebounds and 3.2 assists per game last season, and wanted to prove himself on a bigger stage.

But after Salnave, a 6-foot-3 guard from Elmont, N.Y., and a few of his DePaul teammates contracted the coronavirus this summer and fall, the team has yet to play. Other teams are about a month into the season.

Because DePaul postponed or canceled 11 games to start its season, Salnave has spent a lot of time alone in his dorm room in Chicago studying, playing Fortnite and watching Netflix. He has also looked on with a wistful eye as two of his teammates from Benjamin N. Cardozo High School in Bayside, Queens, Tareq Coburn and Marcus Hammond, have played multiple games at Hofstra and Niagara.

DePaul will be the final men’s basketball program in one of the Power 6 conferences — the Big Ten, the Big East, the Big 12, the Atlantic Coast, the Southeastern and the Pac-12 — to start the 2020-21 season when it opens at home on Wednesday night against Western Illinois, without fans in attendance.

“He’s losing his mind because he isn’t being allowed to do what he loves,” Ron Naclerio, Salnave’s high school coach, said.

The coach figured “this is it” for Salnave, unless he is able to use the extra year next season that the N.C.A.A. has granted all winter sports athletes because of the pandemic.

Salnave, who turns 23 next month, was more measured in his comments than his former coach.

“It’s the world we live in,” he said in a recent phone interview. “It’s expected that these shutdowns are going to happen. It may not happen where we want it to, where we haven’t had a chance to play a game yet, but it was bound to happen. You can try and avoid it as much as you want, you can do everything right, but some way, somehow, it will spread.” 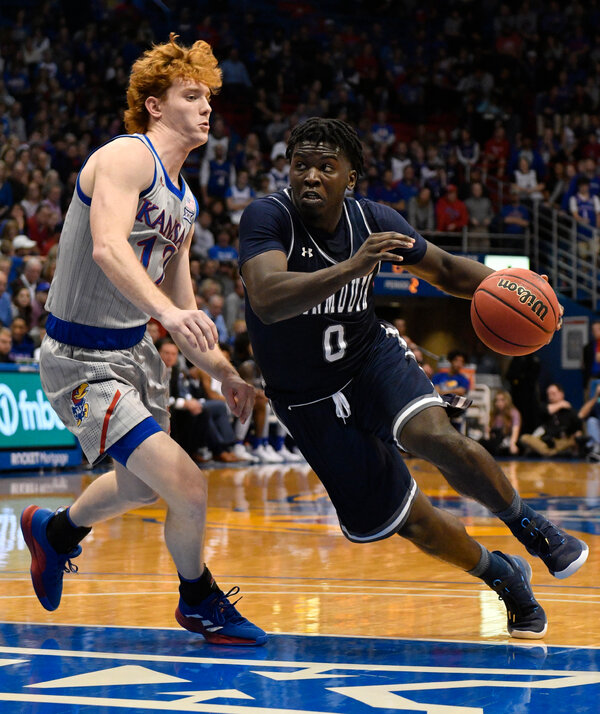 DePaul’s situation is extreme, but it’s not the only program to start playing nearly a month after the season began on Nov. 25. Temple played its first game on Saturday and Albany did so on Sunday. Teams this season must play at least 13 games against other Division I opponents to be eligible for the N.C.A.A. tournament.

No. 1 Gonzaga and No. 2 Baylor had also paused their seasons because of positive coronavirus tests for individuals on or around their teams. After canceling five games, including one against Baylor, Gonzaga returned to the court on Saturday and beat Iowa, a top-five team, 99-88. Baylor destroyed Kansas State, 100-69, on Saturday in its Big 12 opener and first game since Dec. 9.

Houston Coach Kelvin Sampson, whose team has had three games postponed or canceled, recently said that every player on his team has had the virus, and that he has held practices with only six players.

DePaul’s coach, Dave Leitao, said in a phone interview that his program had been dealing with positive coronavirus tests since July. It announced its first virus-related pause on Nov. 19. On Dec. 6, DePaul’s game against Iowa State was canceled an hour before its start time.

Asked on a videoconference call on Tuesday how it felt to go through so many stops and starts, Leitao, a fan of analogies, said: “If you put a tuxedo on and you show up at church and there’s no bride, how do you feel? Or how does the bride feel when the groom doesn’t show up?”

On Dec. 8, DePaul announced another pause, and on Dec. 14, the university announced the pause would continue.

The Blue Demons were set to finally begin play against Connecticut on Wednesday, but the Huskies announced they would not play the game after the state’s health department advised UConn not to play an opponent that was “still within the 14-day period from its last positive test results.” DePaul rescheduled Western Illinois instead.

Duke’s coach, Mike Krzyzewski, recently said that the N.C.A.A. should “reassess” playing during the pandemic. David Worlock, an N.C.A.A. spokesman, had no comment on Krzyzewski’s remarks.

“I don’t think it feels right to anybody,” Krzyzewski said after the Blue Devils lost to Illinois on Dec. 8. “I mean everyone is concerned.”

He added: “You have 2,000 deaths a day. You have 200,000 cases. People are saying the next six weeks are going be the worst. To me, it’s already pretty bad. On the other side of it, there are these vaccines that are coming out.”

Leitao, DePaul’s coach, said the uncertainty and pauses had been difficult on his players’ mental health.

“The fact that they’re waiting around, waiting around, getting ready to play and then we don’t play and practice just for nongames and you watch your peers play and you’re not playing, all of that adds up onto the anxiety of it all,” he said.

Leitao said the situation added to the challenges he faced as a coach because he was not able to spend time with his players and mentor them while they were in quarantine. Seton Hall Coach Kevin Willard, who had the coronavirus and whose team had to quarantine before the season began, referred to that period as “house arrest.”

“Some of the things that they’re going through as a young person,” Leitao said, “or young people in general, particularly athletes who are onstage as college basketball players are, the No. 1 thing that they rely on is their pride, and sometimes they’re too prideful to even admit or realize that you probably have to talk about something that is bothering you.”

Only a handful of DePaul players had even been cleared to work out over the weekend. The team finally returned to practice on Monday. In a video conference call on Tuesday, Leitao estimated that of the team’s 30-plus practices this preseason, there have been “half a dozen with everybody in the gym.”

Because about half the roster consists of new players, Leitao said it had been a challenge to build the team’s chemistry and identity.

“We’re probably not going to be at our best in terms of all of our expected execution measures,” Leitao said about Wednesday’s opener. But, he added, “we’ll be in full win mode psychologically when the ball is thrown up to try to get our first win.”

DePaul isn’t alone in the Big East. Eight of the 11 teams in the league have paused because of positive coronavirus tests, while a ninth, Georgetown, had its coach, Patrick Ewing, hospitalized in May with the virus.

The Big East commissioner, Val Ackerman, told NJ.com that the league planned to continue having teams visit one another’s venues, had “contingency plans” for a bubble and could potentially “pause altogether” if the coronavirus situation worsened significantly.

At DePaul, Salnave and his teammates just want to get on the court.

“It’s just like the same thing in March, the frustration is there,” Salnave said. “We keep having to shut down, but at the same time we keep seeing teams play, so in the long run it might be better because we get all these shutdowns early and then we play so much when we get out that some teams that haven’t been shutting down, God forbid, I don’t wish it on anybody, but teams might start shutting down, too. So it’s going to happen, regardless.”