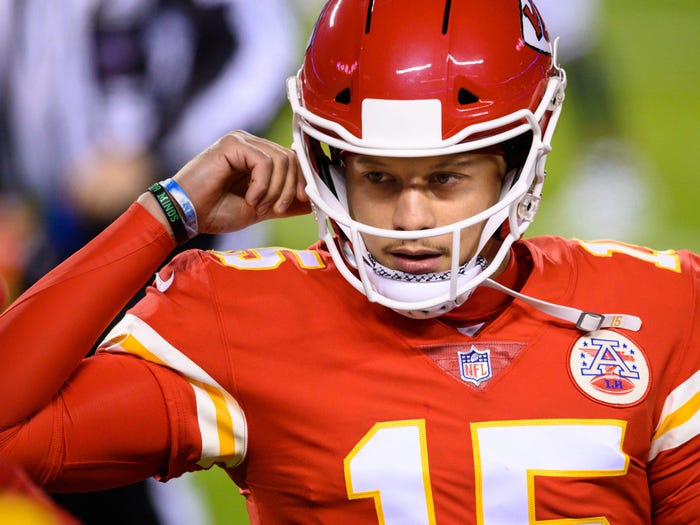 After 13 weeks of NFL football, we are officially three-quarters of the way through the season, with every team having played 12 games with four left on the schedule.

The playoff picture has taken shape. In the AFC, the Chiefs and Steelers stand neck-and-neck atop the standings hoping to secure a first-round bye in the postseason, with several feisty contenders below them. In the NFC, the Saints lead the way with the Packers, Seahawks, and Rams in hot pursuit.

While 14 teams will make the playoffs this winter and fight for the right to lift the Lombardi trophy, according to the number-crunchers at FiveThirtyEight, only 12 teams in the NFL still have a realistic (at least 1%) chance of winning Super Bowl LV.

Take a look below to see which teams are set to make a run at a title.

One thing to know: Baker Mayfield played the best game of his career on Sunday, leading the Browns to five touchdowns and a field goal on their first six possessions to grind the Titans into the ground. If he and the Cleveland offense can carry that form into the postseason, they can play with any team in the league.

One thing to know: Wide receiver T.Y. Hilton has found his form over the past two weeks for the Colts, averaging 90 yards and a score in each of his past two games. It's a good sign for the Indianapolis offense after a dreadful start to the season for Hilton.

One thing to know: Lamar Jackson looked like his old self in his first game back from the COVID-19 list, throwing for 107 yards, rushing for 94 more, and finishing the game with three total touchdowns. Jackson isn't going to repeat as NFL MVP this year, but he still has the Ravens' offense looking like a difficult problem to solve heading into the home stretch of the season.

One thing to know: Derrick Henry had his worst game of the season on Sunday, with the Browns defense holding him to just 60 yards on 15 carries and keeping him out of the end zone. While the Titans' offense got rolling in the second half, it's clear that their production in part lives and dies with Henry's ability to make big plays.

One thing to know: The year of "Let Russ Cook" hit a snag on Sunday when the Giants completely shuttered the Seahawks offense. Russell Wilson looked like he was an unstoppable march towards his first NFL MVP award through the first half of the season, but a few wayward games have thrown him out of the hunt.

One thing to know: Tom Brady and the Tampa Bay Buccaneers lost three of their past four games heading into their bye week. They'll need to right the ship to keep hold of their spot in the playoffs over the final four weeks of the season.

One thing to know: With games against the Patriots, Seahawks, and Cardinals still left on the schedule, the Rams don't have an easy ride to the postseason ahead of them. While they sit atop the NFC West right now, they can't afford to slip up over the next four weeks.

One thing to know: The Buffalo Bills look poised to win the AFC East for the first time since 1995 thanks to stellar play from Josh Allen, who may be the third choice for MVP voters this year behind Aaron Rodgers and Patrick Mahomes.

One thing to know: Aaron Rodgers has been on an absolute tear through the Packers' past four games, completing 72% of his passes and throwing 12 touchdowns to just two interceptions over that stretch.

One thing to know: The 1972 Miami Dolphins popped their champagne on Monday night after the Washington Football Team handed the Steelers their first loss of the 2020 NFL season. With the loss, the Steelers are now tied at 11-1 with the Kansas City Chiefs atop the AFC standings, with a crucial first-round bye in the postseason at stake over the next four games.

One thing to know: Patrick Mahomes is somehow having a season that might be even more brilliant than his MVP campaign in 2018. He's getting help from his superstar supporting cast, including tight end Travis Kelce, who is currently on pace to finish the year with 109 receptions, 1,485 yards, and 11 touchdowns. If he can keep up his pace to hit those numbers, it'd be the greatest tight end season the NFL has ever seen.

One thing to know: The New Orleans Saints overtook the Chiefs' spot atop FiveThirtyEight's predictor this week, and it's not difficult to see why. Playing without starting quarterback Drew Brees, the Saints have still looked dominant over the past few weeks, with a defense that's given up just 8.8 points per game over their past five games.