Imagine Fox setting the example on combating hatred and bigotry.

Yet that’s exactly what is happening this week. Fox Sports, which is owned by the same folks whose news channel is a peddler of conspiracy theories and disinformation that sow division and undermine our democracy, has suspended former Netherlands star and current soccer analyst Marco van Basten for saying “sieg heil” on the air.

Van Basten apologized, saying his use of the Nazi rallying cry was meant to mock a German coach. Not only was that a lame excuse, but it didn’t cut it with Fox, which called van Basten’s remarks “stupid and inappropriate.” It quickly suspended the analyst, and said it would donate his salary for the week to a Dutch institute that promotes knowledge about World War II.

While Fox’s move might not seem particularly noteworthy – suspending someone for using a Nazi war cry seems like it would be a no-brainer – its larger message is. Soccer, particularly in Europe, is riddled with racism, sexism and homophobia, and the powers that be have shown little interest in curtailing it.

Oh, FIFA and some of the continental associations have created catchy slogans and anti-racism campaigns. Leagues have made a show of levying fines against teams whose fans have chanted racist slogans or taunted players of color.

But the efforts are half-hearted, at best. 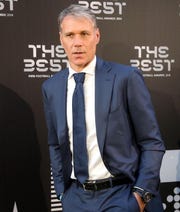 Marco Van Basten was suspended from his duties as a soccer analyst for a week by Fox Sports. (Photo: Matteo Bazzi, EPA-EFE)

Consider that Atalanta was fined a whopping $11,000 by Italy’s Serie A last month after its fans directed racist taunts at Fiorentina’s Dalbert, the third such incident in four weeks. After Bulgaria fans made monkey noises at England’s Tyrone Mings, Raheem Sterling and Marcus Rashford and gave Nazi salutes during a qualifier for the 2020 European championship last month, European officials said Bulgaria’s next home game will have to be played in an empty stadium.

This despite racist behavior by Bulgaria fans during two other games in June.

Yes, that will really send a message!

“They have missed an opportunity to send an uncompromising message on racism and discrimination,” Kick It Out, a group devoted to ending racism in soccer, said in a statement after the Union of European Football Associations announced the discipline.

“The current sanctions, however ‘tough’ UEFA think they may be, are clearly not working and leave victims with little faith in their ability to prevent abusive behavior.”

If soccer officials are serious about wanting to rid the beautiful game of hate and discrimination, they need to impose discipline that is actually meaningful and gives fans reason to change their behavior.

The next time a game in Italy’s domestic league is marred by racist taunts? That team is banned for the rest of the season and relegated for the next. If Mexico fans continue to chant their homophobic slur at an opposing goalkeeper? El Tri is assessed a 15-point penalty for the final round of World Cup qualifying. If Bulgarian fans can’t keep their mouths shut and behave like decent human beings? Out of Europeans – the next two editions of it.

Given the money and prestige that’s involved, these would be no small punishments.

And before American fans get all sanctimonious, there have been problems in Major League Soccer, as well. MLS has done little to curb the neo-Nazis among New York City FC's fan base, and there need to be repercussions. Hefty fines, along with exclusion of its players from All-Star competitions, would be a good start.

Which brings us back to Fox’s suspension of van Basten.

It would have been easy for the network to let the incident slide altogether or issue a bland statement and move on. Van Basten is still a big name in the game, he was off camera at the time and he didn't say the slogan in a way that espoused neo-Nazi or white nationalist ideology.

The only way to curb the hate that is festering in our world is to confront it, head on and with force. Make the repercussions such that those who spew racism and bigotry feel more pain than those who are the subject of their taunts and abuse.

Fox made a statement with its suspension of van Basten, one the whole world needs to hear.